At the end of Interstellar, who built the colony?

At the end of Interstellar, we see a colony-camp built on Wolf Edmunds' planet. Is it built by Dr. Brand after her arrival or was it built by Edmunds for the arrival of the human race?

Now first of all, Richard is right in his answer that it isn't really much of a huge colony but just a little camp built from the resources they brought with the Lander from the Endurance.

While some it could have been built by Edmunds, there are indeed some elaborations in the film that the majority of it was indeed set up by Brand. When her camp and her fate on the planet are shown it is Murph who talks about Brand and says

Brand...She's out there setting up camp...Alone in a strange galaxy...

But even more so, the movie actually shows Brand digging out what looks like Edmunds' living container together with a torn flag, right before she buries the deceased Edmunds. So we can deduce that the majority of Edmunds' camp was actually not really usable at all and covered in rubble.

The Nolan brothers' screenplay of the film (as published in Jordan Goldberg's Interstellar: The Complete Screenplay With Selected Storyboards) confirms this, too:

Brand, in suit and helmet, stands watching Case excavate a pod, buried under a massive rock fall. She is crying.

What you've grandly described as the "colony" consists of Brand's lander (at the top of the frame), two pre-made modules from the Endurance (on the right) and a couple of popup tents along with various crap that's been shuttled down from space. Given that the tents are flying a different Project Lazarus flag than the one seen next to Edmund's grave, I think it's reasonable to assume that Brand has erected the majority of this stuff on her own, although given the extreme proximity to Edmund's grave, it's certainly possible that some of it was there before she landed.

For the record, the novelisation also makes it clear that Brand is on her own at this point (e.g. that Coop hasn't arrived yet).

Still breathing, Amelia set her helmet aside and watched the unfamiliar, beautiful sunset.
“By the light of our new sun…”
She turned from the fading star and went back to camp. There was a lot to do, and she was the only one to do it. But she felt, somehow, it was going to be okay.
“In our new home.”

Note the comparison with what Dr. Mann was able to do in much the same timescale... 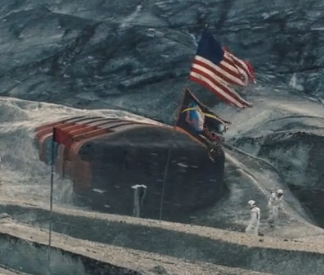 42
How did Murph know about Edmunds?
64
How could the human race be saved in Interstellar?
16
What do Murph and NASA do to save humanity after solving Brand's equation?
9
Why and how did Cooper suspect that Amelia Brand had intimate feelings for Wolf Edmunds in Interstellar?
6
How did Dr. Brand decelerate when reaching Edmunds' Planet?
1
Which Star do we see at the end of Interstellar?
5
Was Plan B in Interstellar carried out?
1
How were both Plan A and Plan B supposed to work together?