Ok, I know this is a longshot, but I hope that somebody out there is able to help me. What I want to know is if anybody has ever heard of this. It is either a TV show or movie that I'm about to describe.

Okay, so I remember a long time ago I had this VHS tape (I'm guessing it's VHS) and I don’t remember if it was a movie or TV show, but it was a cartoon. It was like one of those monster battle type TV shows, like Yu Gi Oh or Bakugan, something like that, but I'm guessing wasn’t too well known because I can't find it anywhere.

Okay, so all I remember from watching it is in the beginning there was a kid and he was at a school and walking down a dark hallway all alone, there were a bunch of doors, he went through one and it was like a portal that took him to another dimension or world.

In that place there was a bunch of monsters that were like his friends. (I think that when he got to the other world, he ended up right next to the gates of a cemetery or somewhere similar). There was one monster who was a skeleton boy that wore a red baseball cap backwards was the boys best friend. While the boy was in this other world, he would go with his group of monster friends to a battle arena and duel.

At one point I think he was battling this big green gooey monster that I think was like a booger monster or something, and I remember the monster running at the boy while puckering its lips and making kissing noises and saying “give me a kiss!” or something like that. That’s all I remember.

I’m remembering all of this from a really long time ago, and who knows, I could have made this up, it could have been a dream, but I'm pretty certain that it's not. If anybody knows what I'm talking about, please tell me the name of it so I can possibly watch it again.

Your description sounds a little like a 1980's cartoon called Mighty Max. It is about a boy that finds a magic hat that has the power to open a portal to another dimension. There, he encounters several strange creatures. The hat is red with a yellow 'M' on the front.

The series follows Max, an adventurous preteen boy who receives in the mail a small statue of a fowl, inscribed with Egyptian hieroglyphs whereof the translation states: "You have been chosen to be the cap-bearer. Go to the mini-mart and wait for a sign, Mighty Max". Shocked by the message, Max drops the statue, shattering it and revealing a red baseball cap emblazoned with a yellow "M", which he dons. 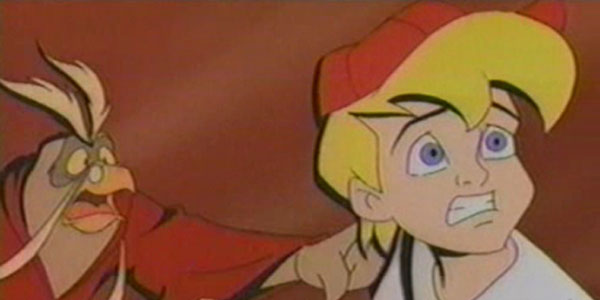