Have they edited the turning water to wine scene in 'Now You See Me'?

Movie: Now You See Me 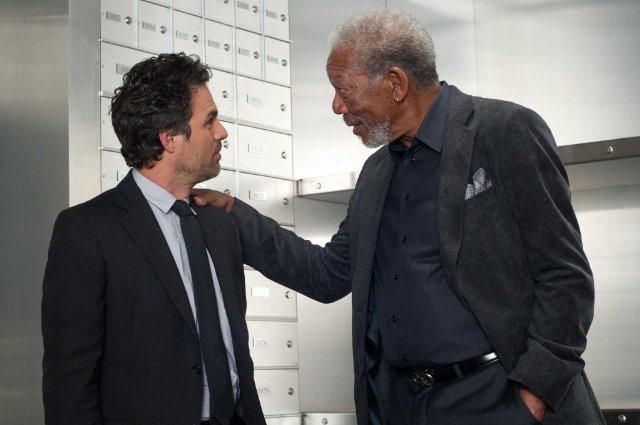 The scene was the first meeting between Mark Ruffalo and Morgan Freeman, in the latter's office. In the first version of the scene, which I saw on DVD, all of them are sitting in a sofa, and Morgan Freeman turns a glass of water to wine by magic. Now after a year or so, I saw the same movie on TV, and they have changed the scene. It's now at a restaurant, they are sitting around a table, and there is no water turning to wine scene.

Have I mixed something up here or are there different versions of this scene shown on TV and released on DVD? Why was this done and which of those was shown in theatres?

As Walt guessed, this is one of the differences between the theatrical version and the extended cut:

Rhodes first contact with Alma and Thaddeus Bradley is different. In the Theatrical Version, the scene takes place at a restaurant. In the Extended Version, Rhodes and Alma are being informed about Bradley's importance by his assistent while she's leading them to his office. He started as a magican and was really good at it which is being ironically noted by Rhodes. When they're finally sitting at the table with Bradley, he offers them wine. Rhodes refuses but Alma would like some, to Rhodes astonishment. Thaddeus grabs a water glass and shakes it. A split second later, it's filled with red wine. Rhodes is impressed. The subseuqent conversation remains basically unchanged.

Not the answer you're looking for? Browse other questions tagged alternate-version now-you-see-me .

5
Why is The Punisher's “declaration of intent” missing from the German version?
6
Why was the cocoon scene edited out of Alien?
21
Can I watch “Now You See Me 2” without watching the first film?
12
How did they shoot the Las Vegas scene in “Now You See Me”?
3
What exactly happened to Dylan Rhodes's father in Now You See Me?
4
Next (2007) Missing Scene
2
What was the need of all those magical tricks such as the rabbit trick or the bubble trick etc. on the second act in Now You See Me?
4
Why was the saw scene cut from Ferdinand the Bull?
11
Missing ending scene in 12 Angry Men?