At the end of Die Hard, the bad guy Theo is knocked unconscious and presumably apprehended by the FBI or the Los Angeles police. Eventually, he would have been charged with several crimes.

Overall, given how Theo participated in a plan that included multiple homicides and other major mayhem, would he be a likely candidate for the death penalty in California at that time (1988)? 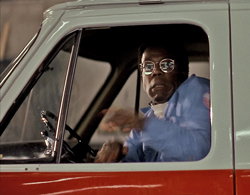 Yes. California has a Felony Murder law codified into law. The event of a homicide during the commission of a felony (Robbery or Mayhem on Theo's part), even if he did not commit the murder himself, would mean he can be charged with 1st Degree Murder. It was likely, and did happen, that murder/lethal force would be used during the crime, and Theo would or should have known this.

A 1987 SCOTUS ruling in Tison v. Arizona would have bolstered any such charge in the following year. Specifically:

Held: Although petitioners neither intended to kill the victims nor inflicted the fatal wounds, the record might support a finding that they had the culpable mental state of reckless indifference to human life. ... Because the Arizona Supreme Court affirmed these death sentences upon a finding that the defendants "intended, contemplated, or anticipated that lethal force would or might be used, or that life would or might be taken," the case must be remanded.

SCOTUS ruled that the use of Felony Murder rule on someone who did not do the killing themselves, due to the circumstances of the planned crime, can be valid.

The Tison brothers only escaped the death penalty afterwards because of their age at the time, having been under 20.

The other answer to this cites the SCOTUS ruling affirming the death penalty being applicable to this matter. However, there are several potential mitigating factors that could have prevented Theo from receiving the death penalty if the narrative of the film was to be believed.

Theo could have parlayed this information (which would have been very valuable to the US government (who probably would have undertaken his prosecution due to the deaths of the two FBI agents and what were presumably FBI-employed or military pilots when the helicopter was brought down) into lighter sentence for himself. After all, everybody would have wanted to know who the inside man was and how far up the Nakatomi ladder the corruption went. THAT person would have then been eligible for the death penalty for being one the architects of the crime.

Yes, Theo would have eligible for the death penalty under 1988 California law, although it's likely that if he did go to trial it would have been as long as several years later due to the complexity of the case. However, he had so much to trade that it's very likely that he would have received a reduced penalty in exchange for information and his testimony at later court proceedings.

Not the answer you're looking for? Browse other questions tagged die-hard .

8
Were the direct references to Die Hard and Under Siege made on purpose?
21
Die Hard detonator insertion -- "F*** it"
31
Did a TV edit of Die Hard have McClane say "Yippie Ki Yay Melon Farmer"?
62
What was Hans Gruber's plan in Die Hard?
11
What makes Die Hard a Christmas movie?
41
Was there a Die Hard movie poster that excluded Bruce Willis?