Was Mace Windu falling into the Dark Side?

Watching Episode 3: Revenge of the Sith, Jedi Master Samuel L. Jackson (Mace Windu) attempts to arrest Sith Lord Darth Sideous, commonly known as Senator/Chancellor/Emperor Palpatine, for crimes against the Republic. During the arrest attempt, Mace disarms and corners Palpatine. After Anakin Skywalker walks in, Mace starts to believe that it's better to kill Palpatine than it is to arrest him. "Too Dangerous to live". Anakin questions Mace, because "this is not the Jedi way."

A bit of background. Anakin faced this same situation earlier in the film, when he fought, disarmed, and cornered Count Dooku, the Sith Lord Darth Tyranus. Palpatine goaded Anakin into killing Dooku because "He's Too Dangerous to live". Anakin falls for it, believing "this is not the Jedi way." Palpatine uses this to make Anakin fall to the Dark Side.

Further more, Mace is the only Jedi to have mastered a fighting form known as Vaapad, or Form VII. It leans heavily on the Dark Side of the Force, using the fighters own emotions, and the enemy's Dark Side against the enemy. It's essentially using fire to fight fire, while attempting to stay on the Light Side. The 3 others that tried to master it all succumbed to the Dark Side because of it. At the time, Mace was struggling to guard against Palpatine's incredibly powerful Force Lightning, a superior Dark Side Force Power. (Maybe Force Life Drain?)

Given this, was Mace falling to the Dark Side when he believed that it was better to kill Palpatine instead of arresting him? Is there any (Disney) canon or word of god evidence to support this?

Based on every canonical source I can find, it seems like Mace Windu simply realized in that moment what Sidious' plans were and had been, and made a logical decision.

Bear in mind, Windu had just seen the revelation that Darth Sidious was extremely skilled with a lightsaber and powerful in the Dark Side - he killed Agen Kolar, Saesee Tiin and Kit Fisto, three highly skilled Jedi Masters, all serving on the High Council, within seconds of starting the battle (though this could largely have been attributed to their surprise and shock at Palpatine being a Sith Lord).

There were also two instances during the battle where Palpatine had Mace Windu beaten and could have killed him, but did not. It would seem that Mace Windu understood that Sidious had something planned and was drawing out the fight, even if he didn't understand fully what that plan was (drawing Anakin to the Dark Side and forging him as his apprentice in accordance with the Rule of Two).

Also, you'll note, Windu does try to arrest Palpatine initially as Anakin is arriving. It's only after Palpatine again attacks him that Windu decides he's "too dangerous to be left alive". His decision also seems rooted in dispassionate logic - he said "he has control of the Senate and the Courts!" - given that Palpatine had just shown he wasn't going to come quietly, it's a very logical assumption to make that he would also attempt to use his considerable influence in the legal process and would have continued to hamper the Jedi. Given that he was both Palpatine AND Sidious, it would have been very easy for Palpatine to "spin" the attack on him by the Jedi as an act of treason and disloyalty...which is exactly what took place anyway. Left alive, Palpatine had positioned himself to win either way, as he had numerous times before over the course of the prequels. Upon realizing that Palpatine was Sidious, it doesn't seem like much of a stretch for Mace Windu to have seen these facts on his own.

Also, one hallmark of the Dark Side was that its motivations were generally self-centered and petty, as evidenced by Anakin in the same scene. He chose to save Padmé rather than do the "right thing" and save the Galaxy from the oppression of the Sith, even though it's clear from the scenes directly previous that he understood the Sith were evil. Mace Windu did not display any hatred or anger towards Palpatine himself, he simply expressed that there was a danger in leaving him alive, which was by all evidence very true.

In short, there's nothing on screen that suggests Mace Windu was in danger of falling to the Dark Side, rather the opposite - he seemed to have died upholding the values and principles of the Light Side.

The film's official novelisation simply describes the moment when he decided to execute Palpatine as one of "grim determination". Mace has clearly weighed up the options and the strong odds of Palpatine being acquitted through his mastery of the courts (not to mention the possession of mind-bending powers) and decides that the most appropriate course of action would be if he executes the Chancellor and accepts whatever consequences flow from that.

As far as being in thrall to the Dark Side of the Force, it's made abundantly clear by the narrator that Windu hasn't fallen and isn't in any danger of falling.

He had learned that it is fear that gives the darkness power. He was not afraid. The darkness had no power over him. But-

Neither did he have power over it.

Vaapad made him an open channel, half of a superconducting loop completed by the shadow; they became a standing wave of battle that expanded into every cubic centimeter of the Chancellor’s office. There was no scrap of carpet nor shred of chair that might not at any second disintegrate in flares of red or purple; lampstands became brief shields, sliced into segments that whirled through the air; couches became terrain to be climbed for advantage or overleapt in retreat. But there was still only the cycle of power, the endless loop, no wound taken on either side, not even the possibility of fatigue.

While it is true that Windu's fighting style(form VII) had a tendency to lead Jedi down towards the Dark Side. I do not think that he was in danger of it himself. As to him saying "He is too dangerous to live" Palpatine still had the emergency powers the senate gave him near the beginning of the movie.

I think the prequels contest perspectives of the Force through failures in the current mainstream Jedi philosophy, which is not necessarily either entirely their fault and/or that there are not instances (like this one with Mace Windu) that prove the standards of the Jedi were to high and need to evolve...

QUI-GON JINN: I will do what I must, Obi-Wan.

During The Phantom Menace viewers come to learn that Qui-Gon Jinn is somewhat "rogue" in terms of how he feels about the nature of the Jedi Order and its Council. This prompts three lines of thought going forward...

With these ideas, one can see the general problems with the situation in a broad way, but it also contest's Qui-Gon Jinn himself, being someone who was right in the sense that the hierarchy structure and commitment to the Republic is not fair or a good way to approach doing good work on behalf of The Force, but yet he couldn't foresee Palpatine's plan and brought Anakin into preview of the Jedi Order.

However, when one looks closer at Anakin's fall one can also see some discouraging or hypocritical things coming from The Jedi directly...

"Attachment is forbidden. Possession is forbidden. Compassion -- which I would define as…unconditional love -- is essential to a Jedi's life. So, you might say that we are encouraged to love."- Anakin Skywalker, Attack of the Clones

So going back to this scene with Mace Windu, one could say that, yes, he went against the Jedi believe system by not wholeheartedly following "due process"and being "encouraged to love" and in affect, the action of wanting to kill Palpatine this way is how A JEDI would believe a Sith would act, but at the same time, despite what Anakin didn't understand about what Palpatine had done, is still understandable and might have been the right thing to do since most likley with Palpatine, it would have been "kill of be killed". 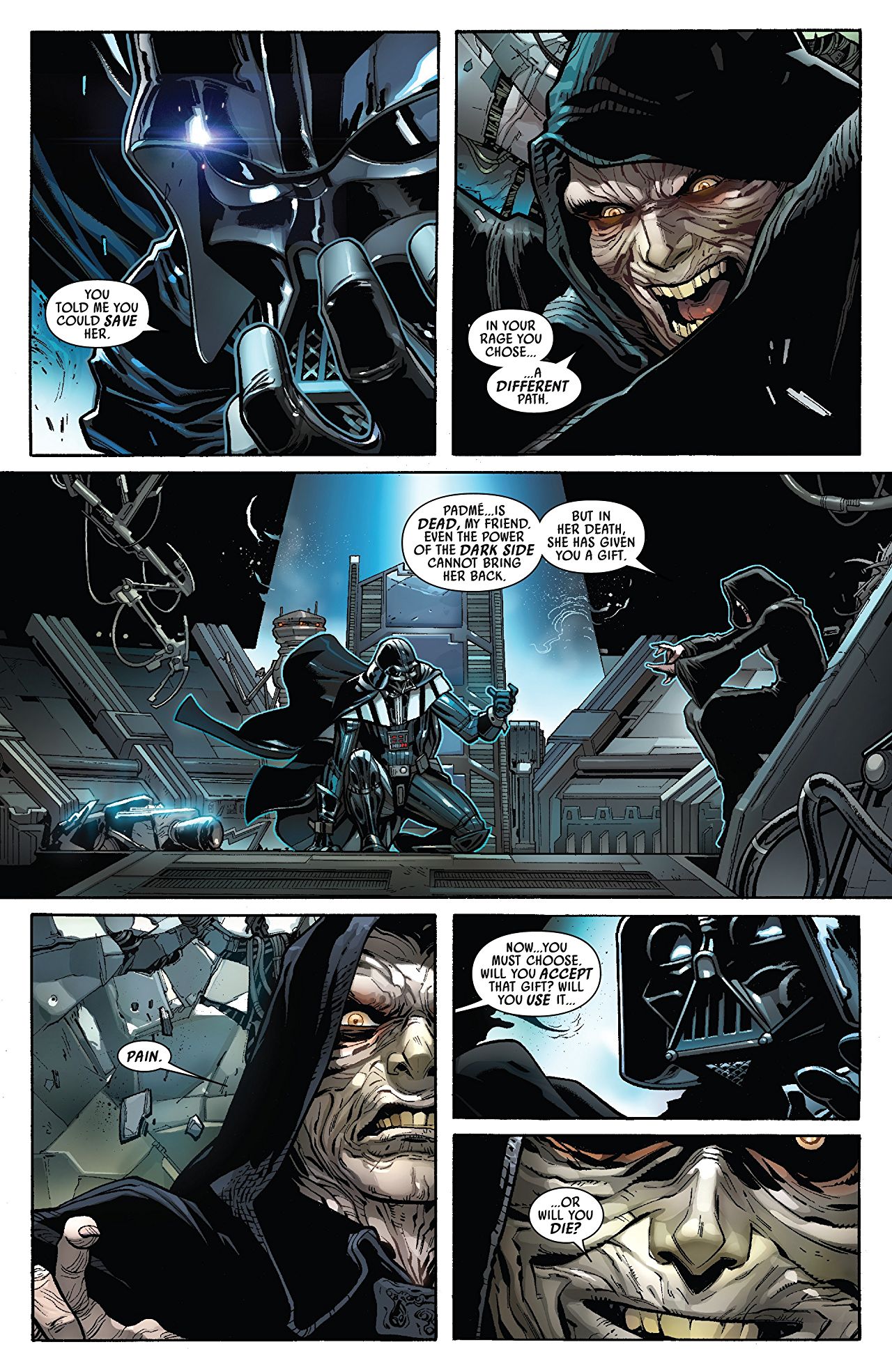 But in addition there is new information coming from the ongoing Darth Vader comic series, that turning to the dark side is not instant, but an ongoing process, as Vader has many trials in attempts to quash his light, but ultimately during the latest arc, seeks to still save Padme' from death!

Mace Windu may have taken a step towards the dark, but it takes more than that to embrace the dark side fully in terms of the way we come to see Sith Lords do it.

So over all I think the prequel era is trying to tell us that the basic perspectives of the light and the dark or the black and the white views that the Jedi held were impossible to live up to without becoming Sith-like themselves, because of the way some their ideals alienated Anakin through fear and mistrust, hypocracy, and a lack of transparency, which is echoed through this tough decision Mace Windu was trying to make. 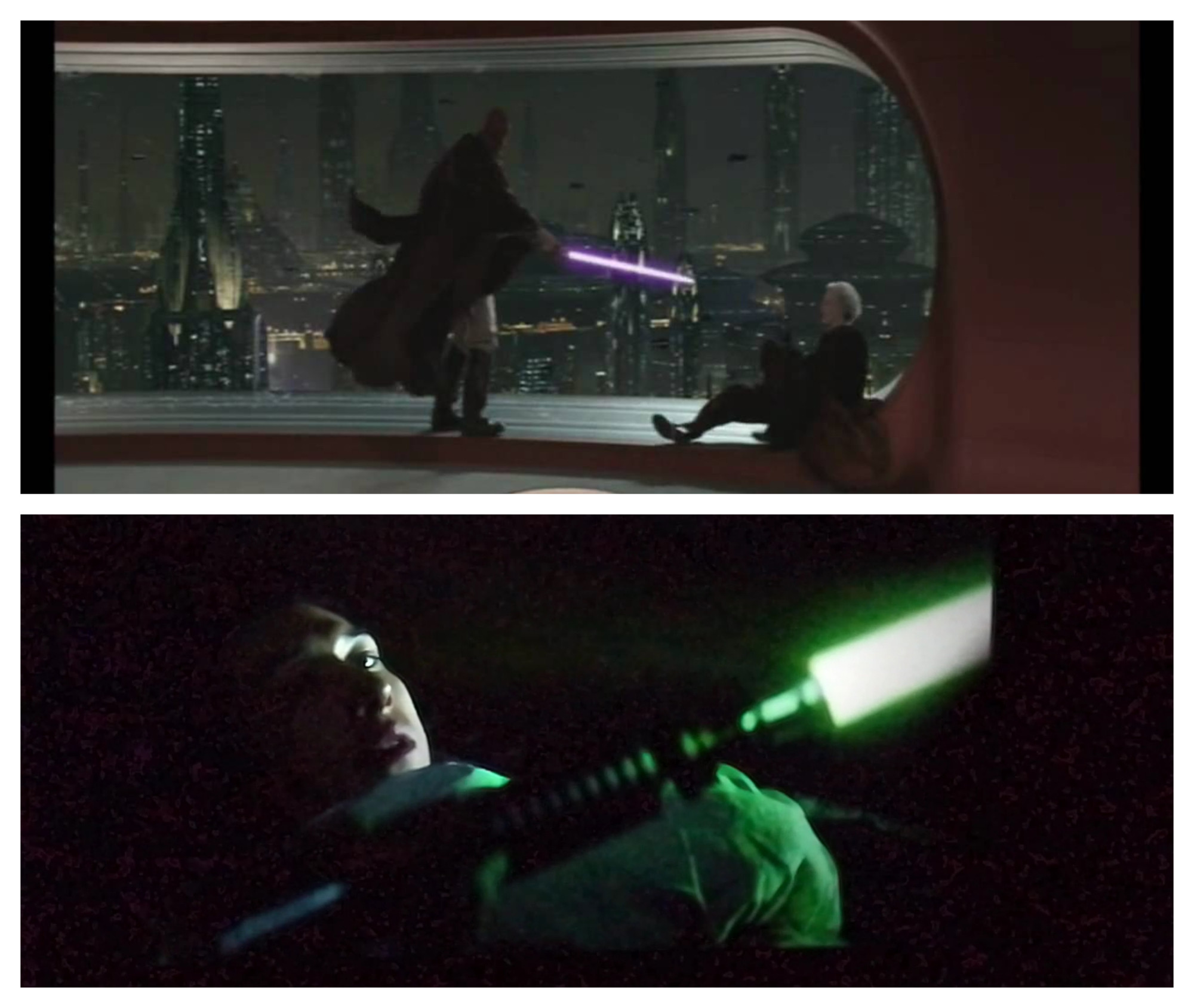 And lastly I would like to add these ideas are also within the current ongoing narrative of the sequel trilogy, as The Last Jedi's story with Luke becoming the centerpiece and important factor in Ben/Kylo Ren's backstory calls back to Anakin's behavior when he killed all the Tuskin Raiders (AotC) and all of the younglings at the Jedi Temple (RotS), but also then this Mace Windu scene, because the concept of morality in face of murder or assassination is the connecting theme and a juxtaposing scene.

To further this The Last Jedi also introduced the concept of 'letting the past die', which was first showcased in The Force Awakens when Ben killed his father, Han Solo. It comes up again when Kylo Ren couldn't take a shot at his mother's ship, feeling her through the Force.

"The Jedi must end." - Luke Skywalker, The Last Jedi

But it is also present in Luke's story, as he states a similar idea when he says, "The Jedi Must End". Both characters though are proven that the notion of letting the past die is false, because Kylo Ren is seemingly motivated by his obsession with Darth Vader and is pushed closer to Snoke with a series of interactions between Luke & Kylo calling back to Anakin's actions AND Luke finally redeemed says, "I will not be the last Jedi". The Jedi text also mysteriously end up on The Millennium Falcon presumably for Rey to find.

"I will not be the last Jedi" - Luke Skywalker, The Last Jedi

So all of this is pointing to ideas that the Jedi philosophy needs to evolve, as oppose to parish and this Mace Windu's scene is one indication of this by purposing a grey area in terms of how Jedi have viewed themselves and the Sith.

Not the answer you're looking for? Browse other questions tagged character star-wars revenge-of-the-sith .

19
What made Lord Vader stay with Palpatine after he'd killed Padme?
15
Who is the father of Darth Vader?
9
If the Jedi way is to avoid aggression and only fight as a form of defense, then how come every battle starts with the good guys attacking first?
22
What does the prophecy exactly say in the Star Wars saga?
9
When did Palpatine know he was going to pursue Anakin Skywalker to be his new apprentice?
22
Why did Darth Sidious wait to execute Order 66?
8
Why is Vader defeated so easily?