How was the baby born in the start?

a single woman (and man afterwards) repeats the same cycle starting from kidnapping of a baby, falling in love, etc.. and then again starting from beginning.

So, how was the baby born for the first time, and how does it come to know about the predestination?

I could not find any official sources on that, but I believe that the question "What started it" might be answered with: The invention of time travel.

Similar to how the time travelers cannot travel further than (what was it, 50? don't quite remember) years ahead/behind point zero (which seems to be a that's just how it is thing in the universe of the movie) I think that this time loop the protagonist is stuck in, is an anomaly (or is it a "nomaly" when inventing time travel? who knows...) that was created at the instant the humans of that universe "broke" physics for the first time.

We cannot find a "true" beginning, because there isn't one. From outside of the loop, the events unfold in a logical manner and all people that were not the protagonist are just passing through the loop unaffected. Even other time travelers might be just fine in the sense that they have travels with escape routes.

It is only this strange instant of the protagonist which is stuck forever in the loop, reliving it over and over again, while all other people pass through it.

At the end of the movie, the handler says:

Understand, you are more than an agent, you are a gift given to the world through a predestination paradox. You are the only one. Free from history, ancestry.

Which gave me the idea for this theory... But ultimately, we cannot know the answer.

There was no "first time". It's a bootstrap paradox in which Jane is his/her own father and mother.

Because time travel is being used, it's perfectly possible for an effect to precede a cause, in this case for the original Jane to have been born before her mother. The whole point of the film is that Jane/John exists within a closed time loop.

The ThisisBarry website offers this attractive diagram to help understand what's going on. Note that the events are presented as circular. You can start at any point and the plotline is essentially identical. 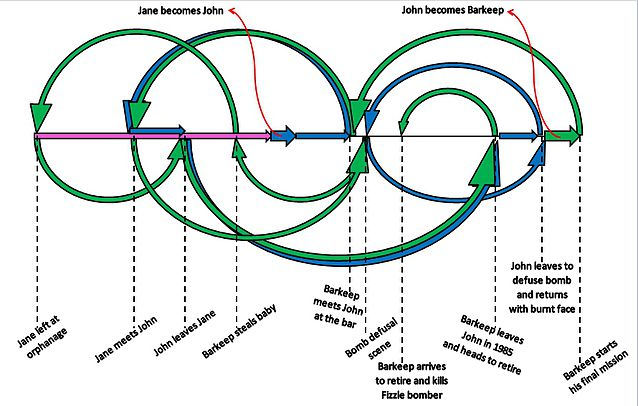 4
Why did the federal police come to arrest Quaid and why was the operator at Recall killed?
26
Where do babies come from in The Matrix?
7
How does Skynet get created in Terminator Genisys?
4
How long were John and Jane together for in Predestination?
3
Why is 'loner leader' / Léa Seydoux against love in " The lobster "?
5
How was the prosperous Kattegat not taken over in Vikings?
7
How did Bellamy's mother hide the fact that she was pregnant, for so long?
4
How come this Extremis Soldier died so easily?