What happened to Gideon on "The Flash"?

The rather powerful, time sensitive, and literal deus ex machina was a stunning find by the team.

The team seems to be immune to the temporal fact of "unwinding Wells" assumably due to Star Labs being immune to it.

What became of Gideon? It seems strange that the team wouldn't try to at least be learning how to work with it.

It seems to have just become another television non-entity like Tiger, the Bradys' dog or Richie Cunningham's older brother.

Gideon disappeared at the end of Season 1 Episode 20, "The Trap" along with the Reverse-Flash suit once Eobard knew the jig was up. Gideon was next seen off-hand in Season 1 Episode 21, "Grodd Lives" when Eobard shows Eddie the News Paper from the projection in his hand. It was last mentioned in Season 2 Episode 1, "The Man Who Saved Central City", re: the News Paper.

According to the EW's interview with Executive Producer Andrew Kreisberg in October for the Premiere of season 2:

EW: Can Team Flash still turn to Wells’ (Tom Cavanagh) A.I. Gideon for answers?
Kreisberg: Gideon is no longer there.

The Voice Actress for Gideon, Morena Baccarin, is also busy with a full time role on Gotham, so she may not even be available in the future.

Update: As of S02E11 "The Reverse-Flash Returns", Gideon has returned with Eobard. They exist as a paradox outside of time, a Time line Remnant.

Logically, Gideon was on Eobard when he was destroyed in time by Eddie's sacrifice. We know that the Reverse Flash could contain Gideon in his palm.

Do you see a Power Button anywhere on this thing? Dude this is from the Future. It's Beyond Me.

which mirrors "The Trap":

If I can get into it's operating system, maybe I can disable it's memory core. [Barry has Gideon reveal it.] Nervous Laugh Yeah, Nope. [Gives up on that idea as the Core is too complex at first look.] 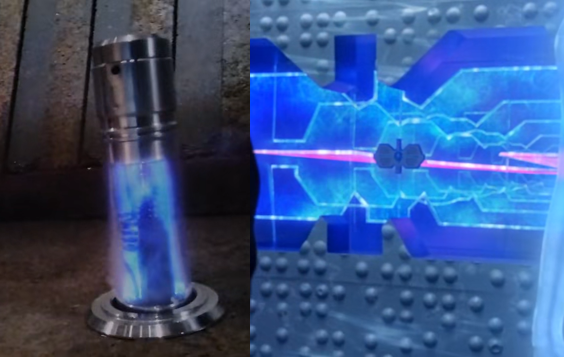 Not the answer you're looking for? Browse other questions tagged plot-explanation character arrowverse the-flash .