What happened to Sheldon's assistant, Alex?

Did she leave her job, or was she fired by Sheldon? On the other hand, does she still work for him, but we don't see her anymore?

I am looking for facts, not theories, I know that it is likely that she left because of the unmet love for Leonard or the sexual harassment committed by Sheldon, but is this mentioned anywhere in the series or by the creators? Will she reappear in a later episode? 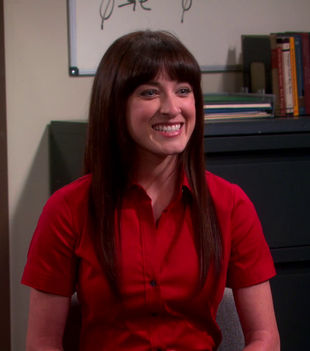 Alex's presence was to force Penny to realize that other smart and pretty women are also interested in Leonard.

But there is no mention of what happened with her after season 6.

It wasn't mentioned and probably won't be because it's not relevant to the narrative of the show. She was introduced, served her purpose and was never heard from again (though one could infer that after the 'sexual harassment' episode that she up and quit). As for will she return, probably not. She was a plot device, it played out, and now she is no longer needed

Didn't Sheldon leave the university briefly once he gave up on String Theory? It could then be inferred that she no longer had a valid posting and had to transfer elsewhere. If still at university, she may appear in passing later.

I've been thinking a lot about this, and have come to the only possible conclusion:

We all know Penny has a violent side. In 'The Dead Hooker Juxtaposition' she physically attacks an upstairs neighbor she barely knows just for asking about Leonard.

In 'The Speckerman Recurrence' she tells Amy and Bernadette that she tied up a girl and left her in a cornfield as a prank in highschool.

Perhaps most telling of all, in 'The Egg Salad Equivalency' she announces to Sheldon, Amy and Bernadette: "I'm gonna kill her!" when she discovers Alex has asked Leonard out.

I suspect Penny killed Alex when she left Sheldon's apartment on Valentine's Day, 2013 in 'The Tangible Affection Proof'. Although Alex was only helping Sheldon get Amy a gift, it's possible Penny thought Alex was trying to move in on Leonard again (even though he was still at work at the time).

Penny kills Alex (possibly with the baseball bat she wields in 'The Bozeman Reaction') and has just enough time to dump the body before getting ready for dinner.

Her aloof, manic and combative mood later that night at dinner with Leonard, Howard and Bernadette is a classic sign of her guilty conscience manifesting itself.

91
Do Sheldon's equations reflect real math/physics research?
24
Big Bang Theory prop on Sheldon's bedroom wall
13
Why do Penny and Sheldon's mom sing "Soft Kitty, Warm Kitty" differently?
16
When did Raj start talking around women without alcohol?
15
What happened to Penny's pharmaceutical sales rep job?
33
How do you combine the elements in Sheldon's T-shirt?
3
Who are Sheldon's references of Crunch and Kangaroo?
28
What is the origin and reason for Sheldon's triple knock in The Big Bang Theory?
3
What's Sheldon's affinity for the Test Pattern t-shirt?