Why does Cobb wake up in the water?

Inception begins with Cobb waking up or lying on the beach in the water. He is brought before Saito. Later on, we learn that this is limbo.

From Eames' dream (level 3), Cobb and Ariadne go a level deeper to get Fischer back. Everything in the movie points to that level also being limbo. One proof being Cobb presuming to find Saito there.

If he wants to find Saito, why does he 'play around' in the ocean?

To add to the answers, another key bit is that Cobb enters Limbo twice.
reff: Inception Explained

First time with Ariadne, when they go down using the machine to get Fischer. Here they both are aware of where they are and what they are here to do.

Later on when everyone rides up using the kicks, they use oxygen masks and exit the drowning van. Here they leave Cobb to drown, this leads to Cobb's death (if Mal's stabbing doesn't). I would go with the drowning in the van for Cobb's death as that would explain the many years of time lapse between him and Saito.

Once Cobb dies, he reaches Limbo for the second time (the opening scene). This time around he's died and reached Limbo, hence he has no clear idea as to where he is and how he got there.

Here's a layer diagram for this:

You ask a difficult question! A lot of people have different opinions about this, and as the film continually skirts the line between awake and asleep, there is a lot of ambiguity that is left for the viewer to resolve.

The best clues to the logic of Inception can probably be derived from the interview between Christopher Nolan and his brother Jonathan, which can be found in the book Inception: The Shooting Script (Insight Editions - you can read it in part at the link to Google Books).

Christopher recalls being in college, when he would get up after a couple of hours of sleep, go have breakfast, and then come back and sleep some more. This after-breakfast sleep was different - he calls it active dreaming (also known as lucid dreaming) - when you realize you are dreaming and take control of the dream. This got him interested in the "infinite potential of the human mind." He talks about how in dreams we create whole worlds and we think we are having conversations with people, but we are actually putting the words in the other person's mouth.

Inception ...is about a more everyday experience of dreaming...It doesn't question an actual reality. It's just saying, "Okay, we all dream every night. What if you could share your dream with someone else?" And it becomes an alternate reality simply because the dream becomes a form of communication - just like using a telephone or going online. I wanted it, then, to have a rule set, a set of reasons that you could graph for why it's not chaos and anarchy - for why it has to be order, and why you need architects and an architectural brain to create the world of the dream for the subject to enter.

The story is moved along by the mind's conflicting tendencies to create structures to defend itself and protect information and also to leak secrets when worried.

There is a hand-drawn diagram in the book "detailing the team's path through the various layers of the heist dream , and their subsequent 'kick' back to reality." Here it is in part: 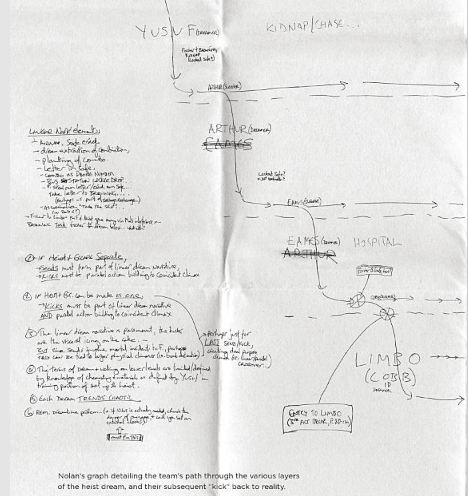 First of all, you have to keep in mind that the movie repeatedly plays with and takes advantage from the fact that in dreams you don't always know how things happen. The movie doesn't have to provide any explanation of how someone gets to a certain place or how something just appears out of nothing as there is none. In the same way it is not really relevant how Cobb got there, he just did.

Cobb: Let me ask you a question. You never really remember the beginning of a dream, do you? You always wind up right in the middle of what's going on...So how did we end up here?
Ariadne: Well, we just came from the...
Cobb: Think about it, Ariadne. How did you get here? Where are you right now?

Of course I don't say we're not supposed to expect a reasonable and consistent story, but by employing the whole metaphor-filled dream world the movie gives itself the freedom to leave out certain connective details in the story because they might just not have happened in a clear way or one that the persons involved were entirely aware of. This can also be seen in the fact that Saito is a significantly older man than Cobb at the end, while still entering limbo after Cobb did (since he died on level 3 after Cobb and Ariadne went down there to search Fischer). So we see that time and space doesn't work entirely continuous or consistent for the different people trapped in there.

What we can see from the movie, though, is that it was a bit of a long time and travel to get there even for Cobb (albeit maybe not as long a time as it was for Saito). This is evident in Cobb's rather weary appearance and especially in his extremely dull and glass-eyed gaze during his conversation with the old Saito and his slighty hesitant and absent way of answering questions. While he has obviously come to remind Saito of "something he once knew", we see that Cobb has himself difficulties to not forget it. He has obviously passed enough time in limbo to slightly cloud his judgement of reality, even if not shattering it.

So why the ocean? Well, Saito's own built limbo reality is a fortess on an island (or at the coast at least), so the beach is a natural place to enter this realm. You can ask the same question of why Cobb and Ariadne wake up at the beach when they could as well wake up right in front of Mal's apartment building. We see that the physical picture of limbo is basically a vast ocean with landmasses constructed and shaped by the people having been there, be this Cobb's and Mal's city or Saito's residence. This fits well to what limbo actually is:

Raw, infinite subconscious. Nothing there but what was left behind by anyone on the team who's been trapped there before. On this team... just Cobb.

This fits naturally to an infinite ocean full of (infinitely far away) islands of the mind stuff of its residents. This ocean analogy might be an overly simplified/metaphorical picture of limbo, but that's how those dreams work in the end. The mind searches for natural and intuitive ways to represent stuff in a physical way, and in the case of limbo this means islands in an ocean that are entered by waking up at the beach, like a castaway from a long lost reality.

But how the ocean? Did Cobb swim there? Did he build a raft? Did he jump from the building in Mal's shattering city and fly there? We just don't know, but even more than that, we aren't even supposed to know nor to speculate about it, since a reasonable physical explanation is likely not existing due to the discontinuous nature of space and time in the dream world and limbo in particular. All we're supposed to know is, that Cobb somehow finally found Saito's world inside the (infinite) limbo after a somewhat long and exhausting "journey". (And that information is sufficient for the story.)

Why does Cobb wake up in the water? If he wants to find Saito, why does he 'play around' in the ocean?

And on the other parts of your question:

Did he stumble over his own-made cliff?

You mean that the beach the movie starts with would be the same beach from his own dream? No, they are different.

Did the search take a lot of his strenght, making him too tired and fall asleep on the beach?

He indeed could be exhausted, but we do not know. His search certainly took some time.

Was the fourth level not limbo after all or not the limbo Saito was in, and did Cobb go another level deeper to get to Saito's? This could explain Cobb getting in random surroundings if limbo had much changed because of Saito's long presence there.

That is an interesting thinking. The movie itself states two possibilities for getting (stuck) in Limbo: (1) Being killed while under sedatives, and (2) the way Mal and Cobb previously got in, but we do not exactly know how they did except from going deeper. On the other hand, the movie certainly presents the concept that reaching a deeper level is intentional and that reaching limbo is not or is by accident. So wether Cobb and Ariadne are in the fourth level or in Limbo remains unclear.

Was the opening scene just a nice piece of cinematography without much eye for plot?

Although the opening scene is nice, it is just a wave and someone lying on a beach. All we can conclude is that Saito's mansion is plotted on a beach.

Or am I simply missing something?

Yes, I think you are. From your question wether Cobb stumbles over his own-made cliff, I think you are mixing up different beaches. There are three of them throughout the movie: (1) The beach with Saito's mansion in Limbo with no rocks nor cliffs, (2) the beach from Cobb's own dream where Mal and the kids are playing with stones, pebbles and a lifeguard house, and (3) the beach from Cobb's other dream where he spend 50 years with the collapsing buildings, cliffs if you want to.

Not the answer you're looking for? Browse other questions tagged analysis inception .

44
Why do the kicks have to occur simultaneously?
10
Why was Saito old in Limbo?
7
Why the difference in Cobb's reaction to limbo?