Did she really say 'zombie'?

I think that I have finally heard the word zombie being used in The Walking Dead.

Now correct me if I'm wrong but in season 4 episode 2 when the sickness started to spread through the prison Rick and the group go in there to kill the walkers that were in there when they took one of the little girls to put her in one of the cells. They picked her up kind of and when they do if you listen closely you can hear her say that she's scared or something of the zombies. Now watch this episode and play that part again and again, listen very closely to the little girl to hear her.

The line you're talking about is actually "I forgot everything you taught me".

What does the little girl say?

I don't know of any official scripts available online, and the dialogue you're talking about doesn't appear in the closed captions, so here's my own transcription this scene, along with what the closed captions on the iTunes version of the episode do say. The girl's name is Molly, and she was played by Kennedy Brice.

Carol (to Molly): Come with me! (Carol pushes Molly to a nearby cell) Stay in here.

CC: Come with me. Stay in here.

Molly (to Carol): I forgot everything you taught me! 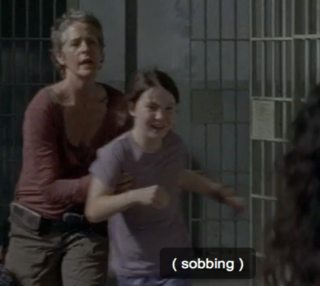 This line is quoted on the TWD wiki, it matches what we hear in the clip, and it makes sense: in the previous episode -* 30 Days Without an Accident *- Carol was seen teaching Molly and the other kids how to kill walkers: 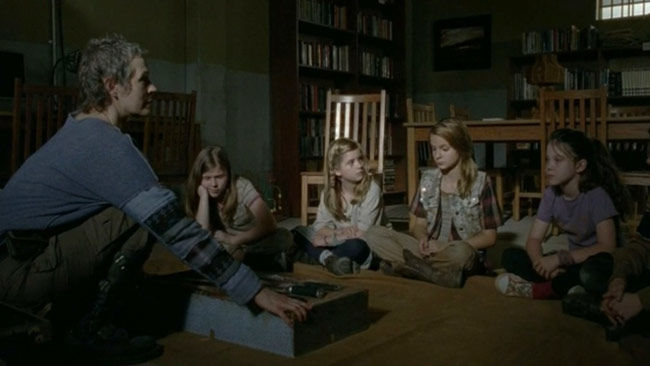 Molly was simply explaining to Carol that she didn't remember what Carol had taught them.

The word "zombie" in the Walking Dead universe:

On the shows, the word "zombie" simply doesn't exist.

It is used - but only very rarely - in the comics; I have only been able to find two instances in which a character says "zombie": 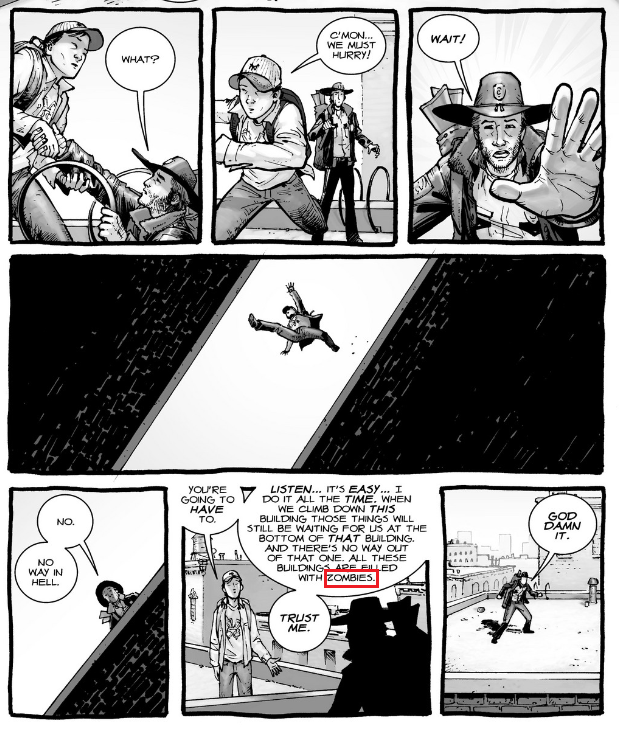 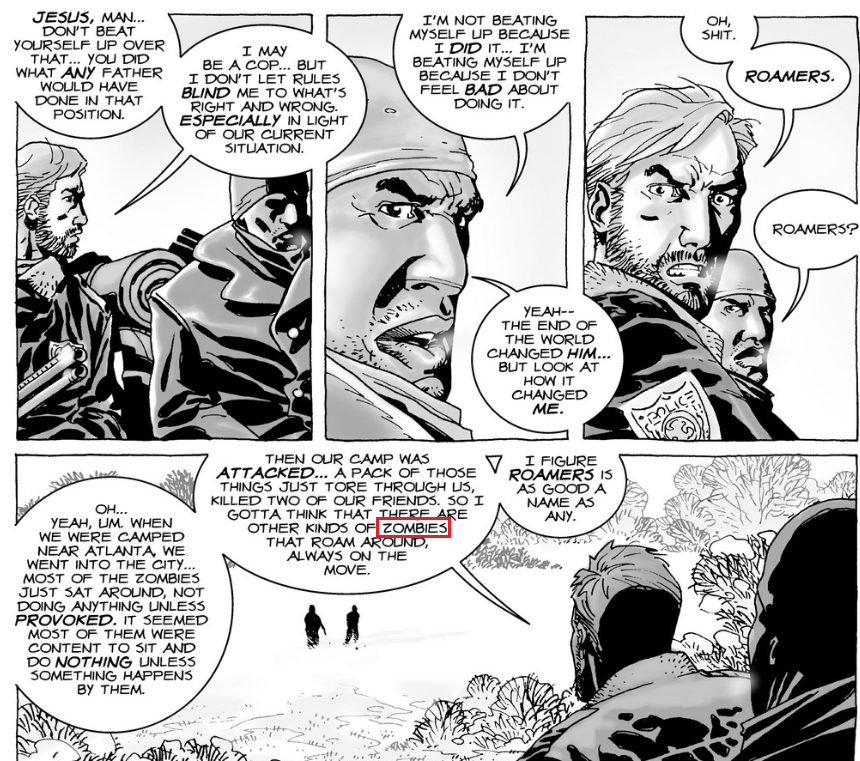 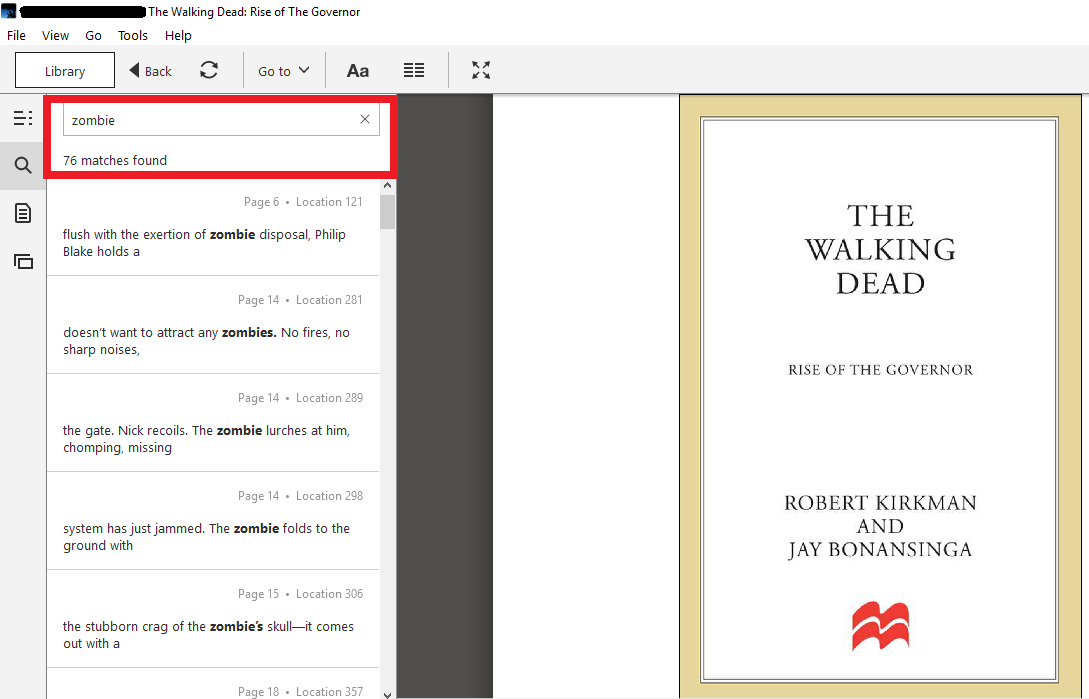 Why don't they say "zombie" on the shows?

We have word of god here, from the creator of the franchise, writer of the comics and novels, and Executive Producer of both shows, Robert Kirkman:

One of the things about this world is that people don’t know how to shoot people in the head at first, and they’re not familiar with zombies, per se. This isn’t a world the (George) Romero movies exist, for instance...because we don’t want to portray it that way, we felt like having them be saying ‘zombie’ all the time would hearken back to all of the zombie films which we, in the real world, know about. So by calling them something different, we’re kind of giving a nod to … these people don’t understand the situation. They’ve never seen this in pop culture, this is a completely new thing for them.
- Robert Kirkman on Talking Dead S1E2, Bloodletting, quoted on The Wrap

What are all the different names survivors have called zombies?

Has anyone revealed why the word “zombie” is used in the comics, but not on the show(s)?

From the Walking Dead Wikia:

While the term "zombie" does exist within The Walking Dead universe, it is seldom used. In the comic book, when Rick Grimes's group discover the prison, both Rick and Tyreese discuss how it still sounds funny to use the word "zombie." Likewise, in the Telltale video game, the term is used very rarely.

"Zombie" has not been used in the TV series; when interviewed, Lauren Cohan stated that Romero movie zombies never existed in the popular fiction of the TV Walking Dead universe. The characters within The Walking Dead TV series and comic books come up with their own monikers and categorizations for the undead.

According to Comic Creator Robert Kirkman in Episode 2 of Talking Dead, in the world of The Walking Dead, the works of George A. Romero were never made, and thus zombies do not appear in fiction.

Source: Talking Dead is a live after-show about AMC's The Walking Dead in which the host Chris Hardwick discusses the show with special guests.

15
How did Shane and Randall turn so fast?
5
What happened to the family photos?
13
Can a zombie be eaten?
28
Why isn't the term "Zombie" used?
2
Head injuries in the Walking Dead
3
How did the walkers enter the prison later?
23
Opening Scene of The Walking Dead?
6
How was this possible at the end of Say Yes?
2
Are some zombies highly skilled?
2
Why did Shane see those visions when he died?