How does Optimus Prime know how Captain Witwicky found Megatron?

In Transformers, after Autobots reveal themselves to Mikaela and Sam, Optimus tells them about how Cybertron got destroyed by Megatron and Decepticons. Then he proceeds to tell them how Sam's great-great-grandfather found Megatron in the North Pole pretty detailed like how it was an accident and how by mistake, he activated Megatron's navigation system.

How can he know all that? Even if it is somehow written in the Sector 7's top secret files (which is unlikely), Autobots never accessed to the P.O.T.U.S. or any other military/government network by that point.

But this is a matter of public record. According to Sam's show-and-tell in class:

Unfortunately, my great-great-grandfather, the genius that he was, wound up going blind and crazy in a psycho ward, drawing these strange symbols and babbling on about some giant ice man that he thought he'd discovered.

He then shows a news article about it. Presumably, his great-great-grandfather told the details there, it's just that no one believed him. But the Autobots could've easily accessed the story (they mention themselves that they learned English online). 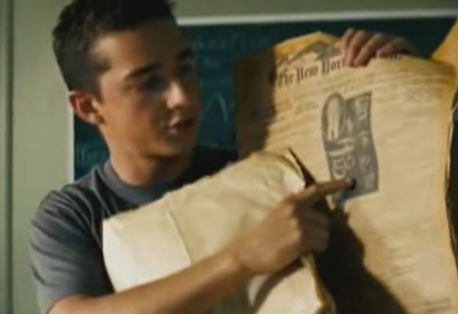 Not the answer you're looking for? Browse other questions tagged transformers transformers-2007 .

5
Why Was Captain Witwicky Exploring The Antarctic?
9
How does Optimus heal himself in Age of extinction?
4
How was Optimus able to fly?
5
How did Optimus Prime know that Sam was a spy?
4
How did Megatron learn English?