What was the significance of the words written by Oliver on the advertisement board?

In a scene from the movie Beginners (2010), the character Oliver is spraying some words on an advertisement board with spray paint and he sprayed these words,

YOU MAKE ME LAUGH, BUT IT'S NOT FUNNY.

What is he referring to? I understand that it is about a feeling of life that he is starting to understand but what is it?

It's a line from a ribbon in Mike Mills' "Humans" collection as reported in an interview in Don't Panic:

At one point in the film, Oliver sprays in giant 3ft lettering "You make me laugh but it's not funny" onto a blank billboard, echoing a phrase on one of your Humans brand ribbon designs. It looks like you had a lot of fun with that, similarly the illustrations Oliver creates in the film...

It’s the line from the ribbon yes! That’s part of the crisis thing; for a long time it didn’t look as though I’d be able to make the film, so when it was green lit I put all these things that only I can do into it, my Humans collection, the graffiti I did and the drawings (especially the firework drawings). I felt like “this is my last film” or “this is the film I’m never going to get to do”, so when it went ahead I wanted to put as much into it as I could. As it took me five years to do the film, I started researching fireworks for Beginners and I got really into drawing them. I did a book on them for Nieves and that was published, and the slow process of the film kept going in the background. The same for another project where I hand drew a thousand rainbows and researched Gilbert Baker and the original 1978 Gay Pride flag; all the research set off these independent projects and I included these in there too, sort of like a ripple effect. There’s a lot in the film.

Based on this response, it doesn't seem as though there's necessarily any connection to the rest of the film, only that the director was trying to include a lot of his own art. That being said, I haven't seen the film, so there could certainly be other thoughts on it.

Here's the ribbon in an image: 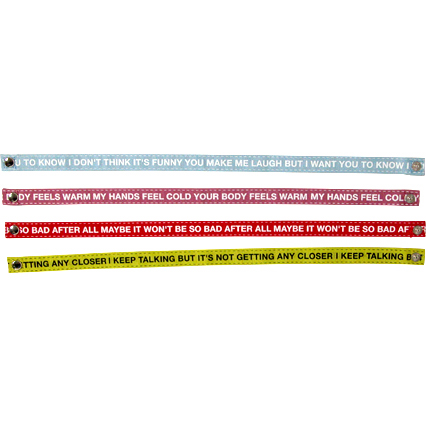 The text appears on the blue ribbon, though it seems to be altered slightly:

Not the answer you're looking for? Browse other questions tagged plot-explanation analysis beginners .

14
In Matrix Reloaded, what are the 'traffic control' people connected to?
18
What is the significance of the iconic imagery in the ending of Dredd?
3
Scene where Steve Martin's character dances to music on the radio
4
What was the point of the interplay between Richard Riddick and Dahl in Riddick?
25
What is the significance of Walt Whitman to a broader understanding of Breaking Bad?
6
Query about business discussion in “City of Angels” episode of Arrow
18
Did Arya really see that the Thin Man was a wrongdoer?
5
Why does the audience let Patty fall?
7
What was Dalton Russell's point in the movie Inside Man?
4
Bob's Burgers “FM” references