How does Darren Cross know Scott is in the suit in Ant-Man?

In the movie Ant-Man, how does Darren Cross know even before seeing his face or ever having met him before that Scott Lang was the Ant-Man?

In the scene where the Ant-Man breaks into Darren's facility and jumps into the thin pipe thing to steal the "yellow jacket" Darren is on to him and gives Hank Pym this whole lecture about how he should be proud of him. How did he know the identity of the new Ant-Man?

Darren did research. Scott who recently got captured outside Hank Pym's home, escaped the prison without leaving a trace. It was like he went puffed. Others might not believe what they saw in the news, but Darran wasn't others.

A little research on this guy showed that he was similar to Hank when it comes to love for daughter.

Darren himself told these two things moments after he captured Ant-Man.

Darren was in the Pym house, after Scott had infiltrated the Avenger's upstate headquarters. When Scott, Hank, and Hope are arguing about the fight with Falcon, Cross not only sees Hope, but he listens to them. Especially Scott bragging about Fighting an Avenger and not Dying.

So, Cross sees Hope at Hank's house and decides not to kill him yet, because I wasn't ready to kill [Hope] yet. He also plans for Scott's eventual heist as he phrases it.

The only logic explanation is that he sees Scott, and the plan, while there.

At 1h06m28s, right as Hank opens the door to his study, a blink and you'll miss it moment happens. A squeaking sound is played, exactly like the Yellow Jacket suit has when shrinking or enlarging later in the film. This is before we see Cross. This is implying that Cross is using the Cross Particles, when he went to kill Hank. This is how Cross gets in the house (no, Hank didn't leave the door unlocked). This ties in to how he is acting at Pym Tech, when Hope says:

This is not who you are. It's the particles altering your brain chemistry.

Remember, Hank says this to Scott earlier as well. The Ant-Man helmet is designed to prevent the issues with the brain chemistry, but even then, years of it prevent Hank from using it again. So Pym/Cross Particles are dangerous to a user's mental health, and the effect can only be reduced, not removed completely. And Cross, using the Particles without any protection, as Hank puts it:

If one isn't protected by a specialized helmet, it can affect the brain's chemistry.
I don't think Darren realizes this, and, you know, he's not the most stable guy to begin with.

Anyway, having seen and heard everything, he knows what Scott looks like, and does some research. Remember, Scott Lang is a well known, famous cat burglar. His crime was national news. You don't get caught stealing 5 million dollars without some press. Frankly, Darren could have simply remembered reading/seeing about him in the news. 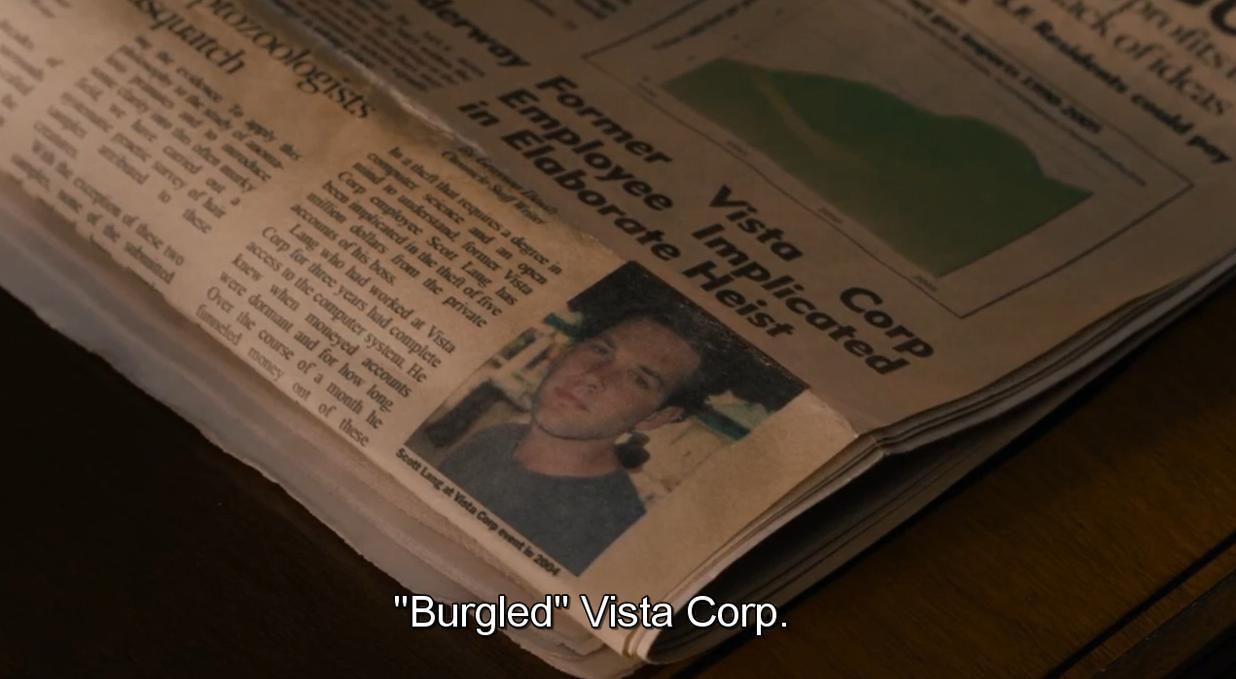 13
How did Ant-Man manage to get big again?
4
Why was Ant-Man excluded from the Civil War trailer?
6
Does the Hulk gain mass through "Pym Particles"?
12
How does Scott Lang afford to live in a townhouse in San Francisco?
9
How do Ant-Man and others change size without special suits?
42
Why did Hank Pym choose Scott Lang?
1
Travel in Quantum Realm in Ant-Man and the Wasp
2
How did the Ghost locate Luis and his friends' workplace?
1
Why did Hank Pym say he created the formula that altered atomic relative distance only 20 years prior?