Why does Leonard on The Big Bang Theory always wear socks when he goes to bed with Penny?

Leonard always wears socks when he goes to bed with Penny.

This seems pretty weird to me. Is there any specific reason why he does this?

It's not explained in the show, but there are a few theories worth exploring.

Why does Leonard on The Big Bang Theory always wear socks when he goes to bed with Penny?

Because naked men wearing socks look funny? Not that we ever see Leonard naked, more's the pity.

Are you 100% sure, he wears socks in bed, like every single time? I don't think that's true any more. Regardless, women will often wear socks in bed because they suffer from cold feet, so perhaps the "socks" is a dig at Hofstadter's physical build; Leonard is after all a nerd, there's nothing macho about him.

Earlier in season 8, viewers discovered Leonard had a deviated septum, in the episode called
The Septum Deviation.

Apparently, sufferers may be unaware that they have this condition, they may mistakenly believe they are particularly vulnerable to head colds, and nosebleeds, they may experience difficulty in breathing—and we all know that Leonard is asthmatic—so, it's plausible that Johnny Galecki's character believes his stuffed up nose, colds and nosebleeds will be exacerbated by having cold feet.

Leonard: Hey, listen, I kind of made plans with the guys this weekend, but then I wondered, because we’re in this relationship-beta-test, if I should have asked you first. Then I thought if I did check with you first, you’d think that I was taking things to seriously. And then, then I got a nosebleed

Wikipedia lists the following symptoms of a deviated septum: infections of the sinus, sleep apnea, snoring, repetitive sneezing, nosebleeds, difficulty with breathing, and mild to severe loss of the ability to smell.

Leonard will wear socks and a T-shirt in bed when he is in a hotel and the floor is carpeted... 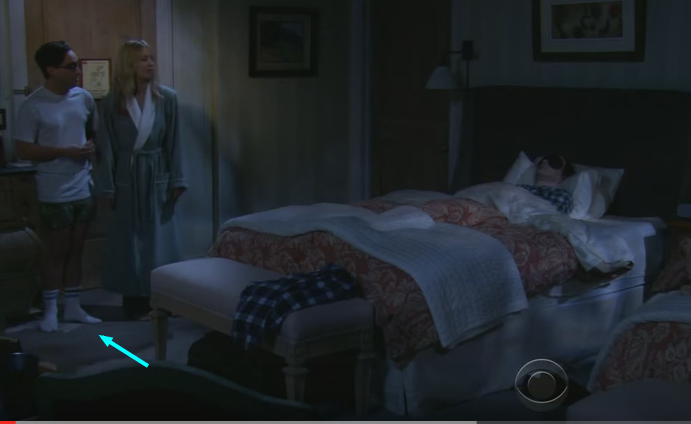 and when making love to Penny (in this scene he is bare chested, so naked man wearing socks in bed with a beautiful girl = funny) 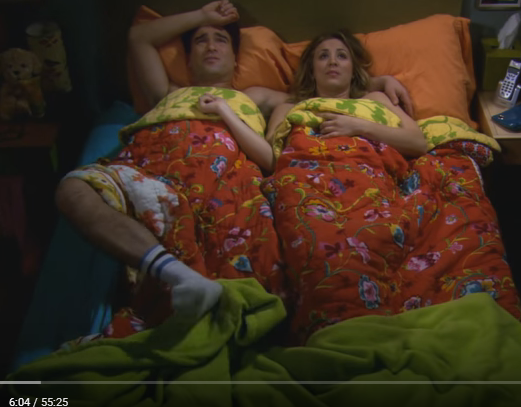 It's a psychological thing. There is a long-held belief that wearing socks in bed indicates a fear of intimacy. Leonard, while probably the most socially adjusted character on The big Bang Theory, is still portrayed as a nerdish person. As such, they generally have limited social skills and limited partners, and this is a subliminal (possibly too subliminal based on the previous answers given) joke about the stereotypical nerd.

12
Why does the Joker always use a knife?
10
Why does Umbridge always wear pink dresses?
3
Why does Deputy Chief Noland always wear a uniform?
7
Why is the title of The Big Bang Theory not translated in Quebec?
16
When did Raj start talking around women without alcohol?
6
Does Sheldon Cooper really care about Leonard Hofstadter?
15
What happened to Penny's pharmaceutical sales rep job?
18
What happened to Sheldon's assistant, Alex?
4
Why does Sheldon not stop Leonard from sitting in his spot on the couch?
2
Why is there background laughter in The Big Bang Theory 12x15 @11.30?