At the start of season eight in The Big Bang Theory, Penny quits her job as an actress and becomes a pharmaceutical rep in the same company where Bernadette Wolowitz works in. Apparently, she's good at her job, so much so in S8 E20 The Fortification Implementation, Leonard discovers she is earning twice as much as he does

Penny: Okay, instead of protecting me, why don't you try being excited when something good happens?

Leonard: I'm always excited for you! I'm excited that you found this new job where you're making decent money.

Penny: Decent? I make twice what you make.

Wheaton: For those of you at home, Leonard just found out his fiancée makes way more money than he does.

Penny's lucrative job as a pharmaceutical salesperson is briefly mentioned in the following episode, "The Communication Deterioration" and then... never again. It is now season nine, eleven episodes have been aired, and not once does anyone mention about Penny's work. Not her husband, whom we see still works in Caltech, not Bernadette who is her co-worker, nor Penny herself. Penny's past as an aspiring actress who waited on tables in the Cheesecake factory is never mentioned either. I realize that as a character, Penny could not continue waiting at tables forever while attending the odd audition. The writers either had to give her an acting break, or she had to ‘give up’ her dream and find a job that offered her financial security. And it's great that the show has two strong female characters who excel in their professions, so why have the writers ignored Penny's career in season nine?

Here's my take, and supported by some external evidence.

The writers have recently been busy focusing on Sheldon and Amy's relationship, in fact the last episode showed the two scientists finally consummating their love in The Opening Night Excitation, aired 17 December on CBS; finally ending up in bed together after five years of dating. Sheldon chooses to miss the premier of the Star Wars sequel, The Force Awakens, because it is Amy's birthday, and he wants to give her ‘his genitals’ as a birthday present. (Would the "old" Sheldon ever have made this choice “Coitus vs. Star Wars” three or two years ago? But I digress...) 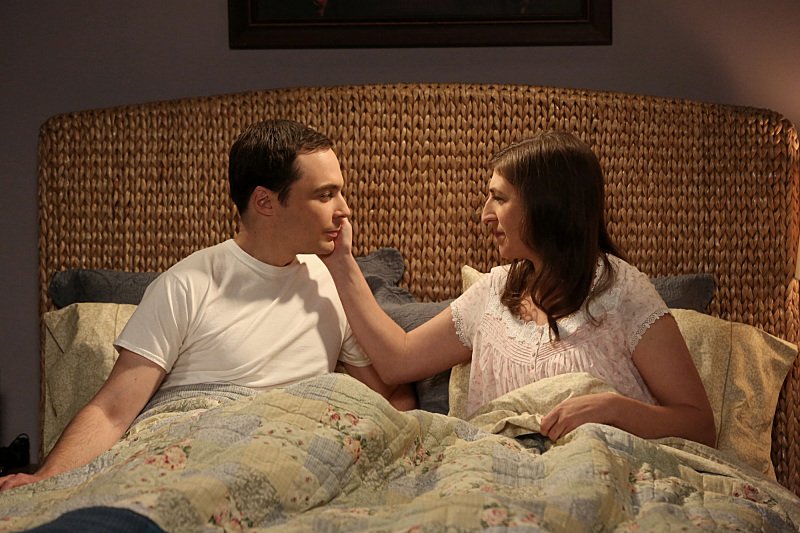 Raj seems to be single again, Howard and Bernadette do not argue nearly as often as they used to, and Leonard and Sheldon are still sharing the same apartment. It's important to note that neither Leonard nor Penny have actually moved in together, they either spend the night in Penny's apartment or at Sheldon's.

(UPDATED SPOILER ALERT Do not read further, if you prefer not to hear what happens in the next episode)

The leaked spoiler reveals that pair will be seeing a psychiatrist when the hit series "The Big Bang Theory" returns for the second half of season 9.

In episode 12 titled "The Sales Call Sublimation," Wikia reports that the newly married couple will be discovering some martial issues after talking to Dr. Sarita Gallo (Jane Kaczmarek). Penny will meet her when she makes a sales call to her office [After 11 episodes of silence we finally get to see Penny working at her new job] and the latter refused to entertain her. Because of this, she will reportedly ask her husband to pretend to be a client so that they can get her to buy the drugs Penny are selling. Leonard's wife is currently working as a pharmaceutical sales representative, which she started doing in season 8.

Although Leonard is supposed to be the one who will attend the sessions with Dr. Gallo, Penny will also find herself having sit ins with her. The psychiatrist will even tell her she has anxiety issues and that she is serving as a mother figure to Leonard and not his wife. Dr. Gallo will also suggest to Penny that she should ingest the drugs she is selling, but the latter says no, as her company's product may give her "fits of homicidal rage."

What are these “marital issues”? Has Leonard gone back to wearing socks in bed again? Does Penny want to rekindle her career as an actress? Is she acting like Leonard's mother? Or will the writers shift their focus on Penny earning more money than Leonard as suggested here:

At the show's TCA presentation, creator Chuck Lorre dropped this bit of context: "She's going to start making some money, which will unbalance their relationship as the power shifts," he said, referring to Penny and Leonard

According to showrunner Steve Molaro, Penny's career as a pharma-rep is coming along very nicely in season 9 and she has no immediate plans to pick up her failed acting career, thank you for asking.

What about Penny's acting career? Now that she's married, are we going to see her go back to that at all?

There are no plans at the moment. She's moving forward to pharmaceutical sales and seems to have found a thing that she's pretty good at and enjoying.

So there won't be more Serial Apeist?!

[Laughs.] Not at the moment.

Not the answer you're looking for? Browse other questions tagged plot-explanation character the-big-bang-theory .

10
Why does Leonard on The Big Bang Theory always wear socks when he goes to bed with Penny?

10
What was the actual role of Wooton & Simms in the plot?
41
What is Penny's last name in Big Bang Theory?
16
When did Raj start talking around women without alcohol?
8
What happened to Robert Englund?
18
What happened to Sheldon's assistant, Alex?
14
Why didn't Audrey (Jerry's girlfriend) eat the apple pie?
4
How long was Sabrina in Paris?
3
What did the writers mean by this detail in one scene of one episode of "Alfred Hitchcock Presents" from 1957?