Why is Tyler Durden shown with yellow gloves?

In this image from the movie Fight Club… 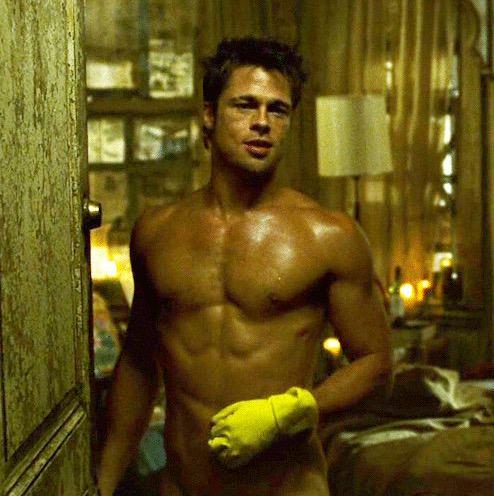 In this scene he just had sex with Marla Singer (Helena Bonham Carter). My question is: Why the heck is he wearing yellow gloves?

I know about a fan theory which postulates:

I think that nothing in this movie nothing is random, or just a joke, so I am curious.

In-universe, this is the sexual equivalent of the "You do NOT want to know" trope. The implication is that he's been doing something unspeakably kinky and weird to Marla (something which caused her to scream in ecstasy) and no further explanation is given. You're basically expected to leave it to your own dirty imagination to work it out.

Notably the incident doesn't appear in either the source book or the shooting script.

Out of universe, this interview with Director David Fincher strongly implies that they (he and Pitt) chose to put the glove into the scene specifically to weird-out the studio executives who'd stipulated that Pitt had to be shirtless twice in the film. Again, no specific sexual act was intimated:

“One of the studio’s issues with the material was how we were going to handle the sex between Marla and Tyler,” says Fincher, whose trade-off for the studio shelling out on Pitt’s dentistry [they paid for the removable cap that ensured Tyler could have a chipped tooth] was that the star would sometimes take his shirt off. He did it twice. One of which was when he opens the door after sex with Marla—wearing a rubber glove. “We had that take starred and sent over to Fox under the guise of, ‘Look! Look how good he looks, he has his shirt off!’” laughs Fincher. “I’ve learned that one way to control people is to give them other things to worry about. If you’re worried that somebody is too fearful you can either try to empower them or you can give them so much to fear that they just don’t want to be around you. Either way you’ve sort of neutralized them!”

Marla isn't a fragment of Jack's imagination first of all, that's a false theory. Secondly, there isn't a true reason for the glove. It was improvised by Brad Pitt for comedic effect. Truly, it's that simple.

From the Triva section of the movie on IMDB:

When Tyler (Brad Pitt) catches The Narrator (Edward Norton) listening at the door as he has sex with Marla (Helena Bonham Carter), he is wearing a rubber glove. This was Brad Pitt's idea, and caused a great deal of controversy with President of Production at Fox 2000 Pictures, Laura Ziskin. She was horrified when she saw the scene and demanded that it be removed. However at a subsequent test screening, the appearance of the glove got the biggest laugh of the whole movie, prompting Ziskin to change her mind.

Not the answer you're looking for? Browse other questions tagged plot-explanation fight-club .