What did Scott ask Hope about the hand?

After Hope punched Scott in Ant-Man, he asked something about her hand, I'm not sure what, something like: "were you going for the hand"? What exactly did he say and what does that mean?

He asks her if she tried to hit his hand instead of his face, since that's what he did to her and hinted that she does the same to him. From the transcript:

Hope van Dyne: [to Pym] Useless. [Hope trains Scott] [...] You punch too hard, you kill someone, too soft, it’s a love-tap. In other words you have to know how to punch.

Scott Lang: I was in prison for three years, I know how to punch.

Hope van Dyne: Show me. [she puts up her hands and Scott hits her hand] Terrible.

Scott Lang: You want to show me how to punch? [he puts up his hand like hers] Show me... [suddenly Hope punches him in the face knocking him back]

Hope van Dyne: [as Scott is still recovering from her punch] Alright princess, let’s get back to work.

Scott Lang: Were you going for the hand?

BTW, this funny little reaction was improvised on set by Paul Rudd.

The humour in the situation comes from the fact that when it was her turn to show him how to punch, she opts not to punch him in the hand (like he did a few moments ago) and instead punches him right in his stupid grinning face

Interestingly, this line was actually ad-libbed by Paul Rudd. In this interview for MDR, Evangeline Lily gives us the unedited version:

Evangeline, how FUN was it to punch [Paul Rudd] all the action scenes?

"You know I didn’t really punch him, right? I didn’t actually punch him…. I loved the take that they kept in the film, because you never know what they’re going to use, and what’s going to end up on the cutting room floor; one of his improvs was when he said “were you aiming for the face– or were you going for the hand?” I was so glad that it ended up in there ’cause I love that line.

Apparently her primary motivation for smacking him in the gob (both in-universe and to us, the viewer) was to demonstrate that she was just as capable, if not more capable a fighter than Scott and that there was a decent justification for her to train him, despite his evident skills as a fighter:

Scott's Masculine Pride. Hope, a girl he underestimates, just straight sucker punched him in the face. By asking her Were you going for the hand?, he's trying to save face (no pun intended). If she was going for the hand and missed, he's have an excuse for being punched by a girl. Hope adds to hurting his Pride by calling him Princess. 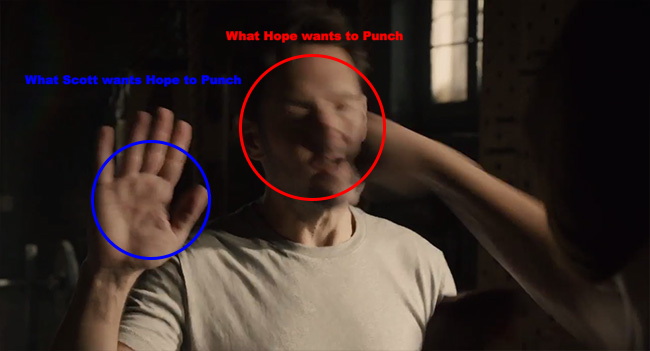 The scene before that line. Notice Scott punches Hope's Hand.

This scene is just one of the ways the film sets up Hope's characterization. A more in-depth look:

Not the answer you're looking for? Browse other questions tagged dialogue marvel-cinematic-universe ant-man .

24
What did Captain America mean after being kissed by Black Widow?
13
How did Ant-Man manage to get big again?
3
What was being referred to in the Mockingjay Part 2 Epilogue?
4
Why was Ant-Man excluded from the Civil War trailer?
5
What are they talking about with Ben in Rise Of The Nutters?
0
What did this bit of dialogue mean in the movie The Sweet Hereafter?
2
What is the significance of "sums to 10" in this scene?
28
Explain Ant-Man's "not it" scene from Avengers: Endgame
30
What exactly did Ant-Man see that made him say that their plan worked?