How did the timeline work?

I'm not sure I quite understand how the timelines of Looper work.

You have the initial timeline (A), where Joe shoots himself, goes on to party, and then meets the Asian woman. The Rain Maker starts closing all of the loops. Joe (A) ends up killing the people that have him, and sends himself back in time and prevents his younger self killing him.

We find out that whatever happens to the young Joe (B) happens to older Joe (A). However, this doesn't quite make sense since the timeline seems to have already been disturbed drastically by Joe (A) not being killed.

So, how is the timeline supposed to work in Looper?

Film.com has an infographic by Rick Slusher: 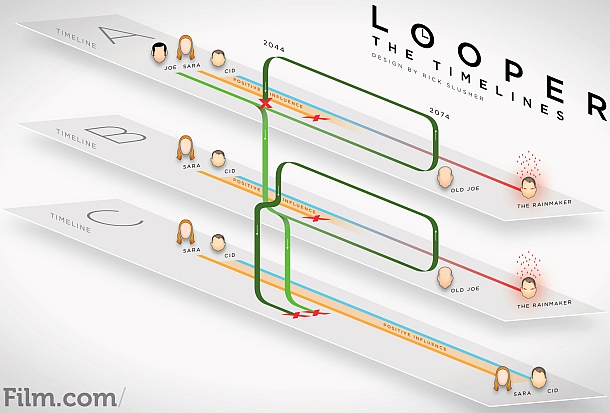 Regarding the other key characters in Timeline A, the infographic illustrates a problematic time paradox in the film:

The moment of Joe’s successful loop-closing in Timeline A instantly launches Timeline B:

Therefore, Joe’s altered moment of execution in 2044 – this time a narrow escape rather than a successful kill – instantly launches Timeline C:

Based on your question, we're ignoring the fun times around Seth at the start of the film, and focusing on Joe. Having seen the film twice, there are some nuances I missed the first time through, so I'm altering my answer. There are three timelines that matter:

The director acknowledges there are some oddities around the timelines, as the Rainmaker is described as having a fake jaw and seeing his mother killed in front of him, which would suggest that we always see timelines where Old Joe shot widdle Rainmaker.

Within the film narrative, I think it's stating that one of the ramifications of timeline 1 above was that because Joe knew his loop would be closed, that he then was able to successfully overpower the henchmen and choose to go back in time. Thus, he created the 2nd timeline, because the causality loop of him killing himself wasn't tight enough, due to the possibility of overpowering the henchmen.

Not the answer you're looking for? Browse other questions tagged looper .

0
How is it possible that old Joe was killed by young Joe, but he appears again?

11
What did the sign say?
8
What happened to change Joe's timeline?
11
How could Joe end up in the field?
17
How did Sara know what a Looper was?
13
How did they dispose old Joe's wife's body in the movie Looper (2012)?
4
Why is it that the police are helping track down Joe in Looper (2012)
8
Crossing your own timeline, changing the future - how does that work?
4
What were the pipes going through the fuel tank in the car in Looper (2012)?