Is Penny an alcoholic?

I'm struggling to recall a scene in The Big Bang Theory where Penny isn't drinking, getting ready to drink or making a crack about needing a drink (usually in order to make some interminable event go faster)

Is there any evidence within the show, or from outside via the show's creators/writers, to confirm or deny that Penny has an actual drinking problem?

Longer answer: she might have (had) a problem of alcohol abuse

Unless the writers are hiding something from the viewers, we see that Penny enjoys drinking in company, her favourite alcoholic beverage seems to be red wine, but she also drinks cocktails and the hard stuff to help her relax.

Sheldon: I wronged Howard, and he won’t accept my apology.

Sheldon: Penny, you face failure on a daily basis. How do you cope?

Scene: Penny’s apartment. Penny has a bottle of wine. She can’t find a glass. Finds a measuring jug and uses that instead. There is a knock on the door.

Amy: Keeping accurate track of your alcohol intake. Smart idea considering how trampy you get when you’ve had a few.

Sheldon: Penny, please, I’m on the horns of a relationship dilemma. And for the record, I had a full pubis of hair by the time I was 19.

Penny: And for the record, bleugh. So what are you drinking?

Sheldon: Well, it’s been a rough day. I usually go chamomile tea, but I don’t think that’s going to cut it.

Penny: You could have a Long Island Iced Tea.

Sheldon: Will that calm my nerves?

Penny: It’s calmed the pants off me a couple of times.

Penny (listening in her apartment): You know, if we did a shot every time they said something embarrassing, this would be one hell of a drinking game.

Amy: A little early for alcohol, isn’t it?

Sheldon: You know, I don’t just say smart things about science. I also yodel. (Does)

Amy: I’ll get the vodka.

There was a previous beer drinking game with Amy Fowler in S5, E19 (The Weekend Vortex) but since she has been married to Leonard (S9 E01) it's exceedingly rare to see her alone with a bottle of red, or participate in these old drinking games. Although Sheldon reminds viewers more than once that Penny hasn't given up alcohol, and claims that Penny has a better relationship with white wine than with Leonard.

Sheldon: I wasn’t making a joke, I was merely stating fact. Amy and I have a superior relationship to yours.

Leonard: You don’t honestly think that, do you?

Sheldon: Leonard, I assumed you knew. The ranking of relationships in our circle by quality is me and Amy, Howard and Bernadette, Raj and his girlfriend, Penny and Chardonnay, Penny and you.

Leonard: There isn’t any ranking. And if there were, we wouldn’t be at the bottom of it.

Leonard: That’s the part you have a problem with?

Amy: There they go, fighting again. You’d never hear her talk that way to Sauvignon Blanc.

Sheldon: Do you want to say it?

Amy: Let’s say it together.

Together: We’re getting a turtle.

Penny: This is why I’ve been saying we should keep champagne on ice.

Sheldon: Okay. That was tricky, ’cause when it comes to alcohol, she generally means business.

The website Web MD.com lists the following symptoms of alcoholism.

Signs of alcohol dependence or addiction

Penny has has never expressed the desire to give up drinking, she enjoys drinking, she enjoys the buzz that alcohol gives her, but there have been times in the past when she turned to alcohol for comfort and to numb the pain of a broken heart. In a 2011 comic-con interview, Kaley Cuoco said, “Penny has more baggage than any of the guys, let's be honest. That's the truth of it all.”

The drinking helps to dull the pain, to lighten the baggage temporarily; but is she addicted? No.

Perhaps the only significant scene where Penny's drinking lands her in deep trouble is in S4 E24, The Roommate Transmogrification

Penny and Raj are in Sheldon's apartment, drowning their sorrows when a sozzled Penny confesses to Raj 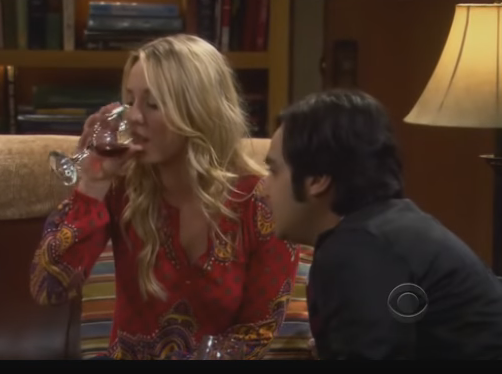 “I screwed up. Leonard’s a great guy. Never should have broken up with him.” The next morning sees Penny waking up naked beside Raj.

Penny: [after Penny tries to sneak out, but finds Sheldon, Leonard, and Howard in the living room] Damn.

Leonard Hofstadter: What is going on?

Penny: [laughing nervously] Oh, it's, it's not what it looks like.

According to Web Md.com guideline, Penny's blackout is the only sign that indicates she may have a drinking problem.

On the other hand, that scene was filmed way back in season 4 and one swallow does not make a summer. There are no other scenes from The Big Bang Theory that hint at any alcohol addiction. Penny enjoys a laugh, she enjoys going out with the girls in bars and restaurants, nowadays she is more like a social drinker. In fact, since she has married Leonard Hofstadter, Penny's character appears to be happier and more self-confident than ever before.

Within the show we have Leonard pointing out to Penny that she might have a problem in the episode The Locomotive Manipulation (Season 7, Episode 15).

Bernadette Rostenkowski: You sure you guys don't want to come with us to Napa. You can probably still get a room.

Penny: No. I think we'll just have a quiet weekend at home.

Leonard Hofstadter: Of course I'm not sure it's a great idea to take Penny where wine comes from. What? It's a joke. Oh, come on. We bust on each other. I wear dorky glasses and you might have a problem. It's all for laughs.

Penny: That would really piss me off if I didn't have a buzz going on.

In Season 7, Episode 2, The Deception Verification, when Sheldon goes to Penny's apartment and and asks her why there are two glasses of wine on the table, we have this dialogue:

Sheldon Cooper: That’s curious. If there’s no one here, why are there two glasses of wine on the table?

Penny: Oh. Well, you know, I, I’ve got two hands and a bit of a drinking problem.

Penny is joking, but Sheldon calls her out on her problem, somehow... in a Sheldonian way

Kaley Cuoco is an alcoholic in real life, so maybe it's life imitating art. When out in public she's drunk a lot. Once asked if she knew what the Big Bang theory was, she answered 'you'll have to tune in to find out' lit up from her vehicle. Alcohol was a problem in her marriage says the tabloids as well leading to her divorce and she deflected it by saying her ex was a pill popper. So substance abuse seems to be the key to their break up.

25
How can Penny afford a one bedroom apartment on a waitress salary?
13
Why do Penny and Sheldon's mom sing “Soft Kitty, Warm Kitty” differently?
12
Why is Penny less concerned about the “check engine” light?
10
Why does Leonard on The Big Bang Theory always wear socks when he goes to bed with Penny?
8
Who was Penny mentioning in S02E04 “The Griffin Equivalency”?
8
What floor do Leonard, Sheldon and Penny live on?