Why did Sylvester Stallone empty and reload his gun?

At the beginning of Tango and Cash (1989) Sylvester Stallone pulls ahead of a getaway oil tanker to stop the criminals driving it by shooting at them.

As he preps for this, he pulls out his revolver and dumps all the unfired bullets currently in the gun on the ground only to refill it with more bullets. Why does he do this?

My best guess is he's switching between regular bullets and hollow-points but even if that's the case, I don't understand why he would prefer one or the other in that situation, nor can I tell for sure which one he's switching to.

Detective Ray Tango is armed with a Smith & Wesson Model 36 "Chief's Special" in this particular scene in the movie.

According to imfdb, Tango empties his ammunition and re-loads with blanks.

The reasoning is not explained, but he aims for the perpetrators' driving the oil tanker to try and stop them, but not kill them.

Tango aims his 36. It is clearly loaded with blanks since the bullet heads aren't visible in the front of the chambers.

In-universe, the reasoning seems to be that he's unloaded his normal ammo and replaced it with bullets that will damage the windscreen without actually killing the perps inside. He then stands in the middle of the road and carefully fires at the glass. When he refuses to move, the villains are forced to brake sharply and they fly through the (now-weakened) windshield to land on the road in front of him.

Note the white tips. They appear to be some sort of clear plastic "less than lethal" target round 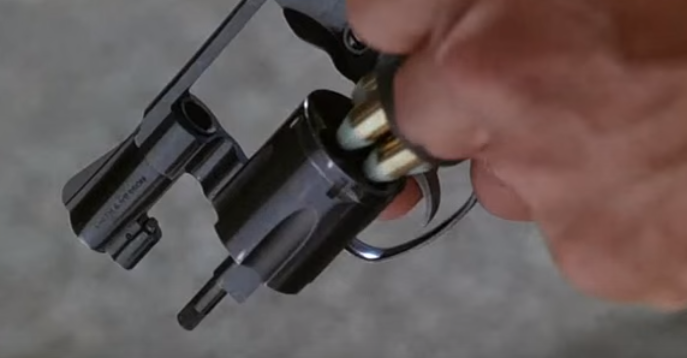 Quite why he's carrying this particular style of bullet is never explained but then again, the film went through three screenwriters (at least one of whom wanted to make the film into a slapstick comedy), two directors, two cinematographers and five(!) editors before it hit the big screen so it's very possible that his reasoning simply got cut out.

Share
Improve this answer
edited Dec 12 '15 at 15:31
answered Dec 12 '15 at 10:55
user7812user7812
|  show 2 more comments
-2
Want to improve this post? Provide detailed answers to this question, including citations and an explanation of why your answer is correct. Answers without enough detail may be edited or deleted.

He was getting rid of the anti-personnel rounds for armor piercing or long distance heavy hitting rounds. This was homage to the Jackie Chan Movie "Police Story".

If you listen carefully when he emptys the 38.....its shell casings that he dumps out...they sound completely hollow.

Not the answer you're looking for? Browse other questions tagged tango-and-cash .