In “La jetée” does the time-traveler's body stay in the present time?

The film La jetée - famous for inspiring 12 Monkeys - appears to feature a method of time travel that is more psychological than mechanical. There is no time machine. Instead, a man who is known for having a strong memory is given an injection. Then the movie cuts back-and-forth between scenes of the man in the past, in the future, and writhing on a cot in the present, under the influence of the injection: 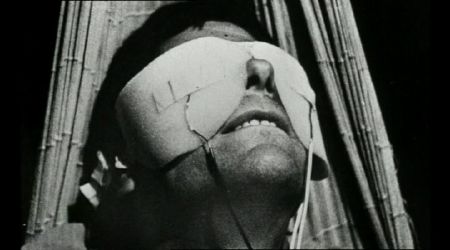 Am I understanding the method of time travel in La jetée accurately? Does the time travel all occur within the time-traveler's mind, meaning his body never leaves the present?

My interpretation for La jetée is that the man is not actually time-traveling. Instead, the injection (and whatever other treatment) he is given sends him deep into his mind and his memory, allowing him to mentally re-visit the world he grew up in vividly enough to deliver to the scientists the information they need from the past. Similarly, the injection enables the man to anticipate the future and again get the information the scientists need.*

Here's link to Spanish-language-dubbed version of La jetée. Starting at about 9:00, you can see how the "time travel" seems to consist of the man writhing on his bed. The narrator says something like "After 10 days, scenes began to come through."

(At the end of La jetée, the man realizes the scientists are going to execute him. He asks to be sent back to the past, and appears to be killed while he is "in" the past. My interpretation is the scientists were kind enough to first give him one last injection before executing him while he was under the influence - so in his mind, he felt like he was dying in the past.)

Can't be answered for sure but in both movies (La Jette and 12 Monkeys) the body is present in the future. Although the details aren't clear, looks like the psychological aspect is only the beginning of the travel, later followed by the body itself.

Not the answer you're looking for? Browse other questions tagged la-jetee .