Was there ever noticeable criticism about Breaking Bad possibly glorifying the drug business?

While Breaking Bad was about the production and trade with methamphetamine and the huge amounts of money to be made with it, it was quite lacking in the actual depiction of drug use and its consequences, other than a few select scenes and a character who didn't seem to have much difficulty switching his addiction on and off. Add to this that the discussion of production methods inside the show, while understandably superficial and fragmentary, has been recognized for its supposed accuracy.

Seeing that the production, trade and usage of methamphetamine is a serious problem in many countries, among them the US, Breaking Bad's possible glorification of the drug business coupled with its apparent "suppression" of the more serious issues of drug use could be seen as detrimental to the efforts of fighting this drug and its business inside the public conciousness. Yet, I'm not aware of any public criticism in that regard (disregarding if I'd personally support that or not).

Has there ever been any noticeable public criticism of the show in this regard? Have maybe even actual anti-drug organizations, be they charitable or governmental, expressed reservations about the show possibly glorifying the drug business? Or has this interpretation never entered public debate? What were the general public reactions to the show regarding the concerns of real-world drug fighting, if there even were any?

I've tried to google for traces of a public debate on Breaking Bad that would be focused on the show's portrayal of the drug business and the drug addicts characters, and I've found some interesting articles, or at least points of view on the matter.

It seems to me that while the general opinion concurs on the fact that the show is well written and that the actors gave terrific performances (most of the praises are for Cranston's work), there are many who criticize the weak approach on the drug theme. Some go as far as claiming that the fact that the show's main character, the "hero", becomes a drug kingpin and that the consequences of the methamphetamine use are scarcely shown, has the side effect of making the drug dangerously glamorous and alluring.

The DEA is clearly not of this opinion since in 2014 has honored the creative team of Breaking Bad guided by Vince Gilligan with the Educational Foundation Global Leadership Award for their "significant and long term positive contributions in support of drug law enforcement and drug abuse prevention education in the United States".

Studies made by the Substance Abuse and Mental Health Services Administration have shown that, although "the meth sold on the street has never been purer, use of the drug has remained flat during the show’s run, and may have even declined slightly" (Article)

An official on America's National Council of Alcoholism and Drug Dependence substantiates this claim by stating that "the number of ‘committed’ methamphetamine users has actually dropped by as much as 200,000 since the show began airing in 2008" (Article)

Barbara Carreno, a spokeswoman for the DEA, credited "the dip in meth use to the fact that it’s harder than ever to get the ingredients that go into meth" claiming that what really made the difference was the "Combat Methamphetamine Epidemic Act of 2005, which put Sudafed and other drugs that contain pseudoephedrine behind the counter" (Article)

Interestingly enough, while the above researches point out that the show seems to have had zero impact on the metamphetamine use in the US, judging by this article in the English newspaper The Telegraph, it looks like in Europe there has been an opposite trend, a spike in fact, in crystal meth usage: "The European Monitoring Centre for Drugs and Drug Addiction has revealed how parts of the EU are now being flooded with methamphetamine".

Professor Ellis Cashmore from Staffordshire University thinks that the show might be to blame. His opinion is that even if "Breaking Bad, portrays drugs in a negative aspect and showing its most destructive side, it will still appeal to somebody." and "Showing the horrendous impact of crystal meth can have a boomerang effect and cause curiosity among some viewers who might think 'that must be good'".

My opinion might be biased by the fact that I loved the show, but while I tend to respect the opinion of a University Professor, my guess is that the above mentioned trends depicted in the US versus the rest of the world might have more to do with a stricter regulation (or lack of) than with the success of a TV Series and the likeability of its characters.

Yes. A branch of Toys'r'Us removed an entire line of "Breaking Bad poseable action figures" as a result of protests and petitions.

The toy store, based in Wayne, new Jersey, told The Associated Press on Tuesday that the dolls were being removed from its shelves and website.

"Let's just say, the action figures have taken an indefinite sabbatical," a statement from the store said. 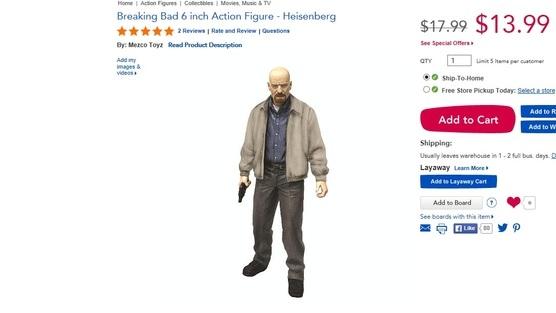 Not the answer you're looking for? Browse other questions tagged breaking-bad reception .

30
Why didn't Walter White consume his own product?