In Cold in July, was the cop killed?

There was a police guy in uniform sat inside guarding the house whilst the family was asleep.

After he is attacked, if you look closely there is a wound to the side of his head. Whether he died or not, it's not said.

Was the cop killed?

I'm gonna say "no", based on three factors;

But already Russel had jumped our cop, and there was a yell from Kevin and the sound of something slamming against the wall in the hall, and I was rolling out of bed, grabbing at the shotgun under it, rushing for the bedroom door.

I got out in the hall just in time to see our Vietnam vet, black belt policeman take a marvelous left hook on the chin that bounced him over his chair even as his hand was in mid-draw for his revolver. The sound of the punch and the way Kevin went down like a broken manikin told me he wouldn’t be getting up for a while.

Price and another officer got Kevin awake and onto the couch to look him over. “You need to work on your stepover toe-hold,” the officer told him.
“That old bastard is as strong as God,” Kevin said.
An ambulance was called out, and a doctor came and looked at Kevin and me and my family. He clucked some, applied a bandage or two and gave us an aspirin 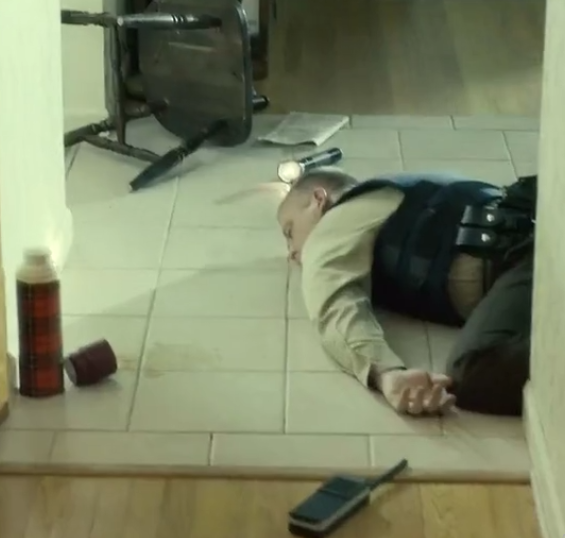 Not the answer you're looking for? Browse other questions tagged analysis cold-in-july .

11
Ending of "Bad Lieutenant: Port of Call New Orleans"
6
Is this the grave of a child in Akira Kurosawa's Dreams?
4
What was the point of the interplay between Richard Riddick and Dahl in Riddick?
14
Tetsuo: The Iron Man, Analysis, Interpretations and randomness
10
Why was this specific character in Age Of Ultron killed off?
44
Is the 2016 movie Trolls about opium addiction?
7
What specifically happened when Holden was killed in Blade Runner?
5
Why do the dialogs have such a cold tone in "The Killing of a Sacred Deer"?
1
Was Billions character Craig Heidecker based on Elon Musk or Steve Jobs?