What was the purpose of keeping Castor Troy alive after the face transplant procedure?

During an ambush at Los Angeles airport, Castor makes a comment to Sean about a bomb that is located somewhere within the city of Los Angeles. Sean does not know whether to believe him or not. Before Sean can find out the truth from him, Castor is knocked into a coma.

In an effort to find the location of the bomb from Castor's brother, Pollux, Sean must go through an experimental face transplant procedure to become Castor.

Archer affirms the threat is real, but is unable to convince Pollux to talk where the bomb is located. At suggestion of his partner Tito, Archer secretly undergoes a highly experimental face transplant procedure by Dr. Walsh to take on Castor's face and appearance. Archer (now played by Cage) is taken to the same high-security prison where Pollux is, and slowly convinces Pollux that he is Castor, gaining information on the bomb's location. Meanwhile, Castor wakes up from his coma prematurely and discovers his face missing.

After the face of Castor is placed onto Sean, they place Sean's face into some sort of preserving agent for reattachment to Sean after the assignment is complete. 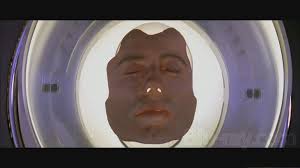 Sean makes the comment to "take this face and burn it" when the assignment is completed. There is no more use for Castor at this point in the movie.

Is there an explanation given as to why Castor Troy is still being kept alive after the procedure was completed?

This is addressed (to some extent) in the film's original script

ARCHER: Why are you keeping him alive? (gets no answer) As long as he's breathing, he's dangerous.

The short answer is that he's currently in FBI custody as a hospitalised prisoner in what appears to be a normal ICU unit. They've certainly put about the story that he's dead (and presumably assigned him a witness protection name) but there's no special indication that they're in a position to just kill him.

Since turning off the life-support of any patient requires a vast amount of time, effort and numerous court appearances, it's presumably a lot easier just to leave him in what they feel is an irreversible coma.

On top of that, if the story ever comes out that they decided to turn off his life support without speaking to his family, every person who was involved would be going to jail for a very long time. Far better to just leave him to quietly rot.