Did John Wayne ever shoot first?

In a recent interview, George Lucas has stated the following:

I said, ‘Yeah, he should be John Wayne.’ And when you’re John Wayne, you don’t shoot people [first] — you let them have the first shot.

John Wayne has been in a LARGE number of movies, I have a very hard time believing he has never shot first. Therefore my question is thus:

Has John Wayne ever shot someone first?

I'm not going to add any qualifiers except that it must be a shot at another being - warning shots do not count. I would prefer a Western Era film, but I'll take a War Movie as well. Punches DO count (I am not a John Wayne expert but I believe there was a scene in the movie McClintock(?) that pretty much fits this bill) as we are going to the (ahem) 'mythological reality' of the situation which has more to do with intent/character of the person then with the actual physical action being portrayed.

Not that I want there to be, but I am sure that somewhere out there evidence must exist that proves Lucas wrong.

The Man Who Shot Liberty Valance

This is a truly great movie that I would recommend to anyone. Depending on your definition of "shot first" this movie might be on topic.

As you can see this more of a "dry gulch" or assassination than a pure "shoot first" like when Indiana Jones brought a gun to a sword fight.

The Sons of Katie Elder

Here is another good movie, but it isn't in the same class as The Man Who Shot Liberty Valance. This movie features a scene where John Wayne walks up on a villain drowning a guy and whacks him in the face with a stick. This is a similar thing where John Wayne defends someone else who is in danger without warning. Later in the movie there is a scene where the brothers are fighting. I don't recall if John Wayne starts that fight or if Bud does.

Here is another one where he whacks a guy with a stick before giving the guy a chance to respond. He isn't saving anyone from immediate bodily harm either.

I'm sure I could go on, but the point is clear. John Wayne will attack a person without warning if he feels that is needed.

In Big Jake (1971) THE FILM for which he would have deserved an Academy Award more than for True Grit (1968), Duke guns down a gunfighter while taking a shower, before the guy has a chance to pull the trigger to kill him. The killer (Roy Jenson) didn't see it come as his target was taking a shower with his longjohns and his Greener. 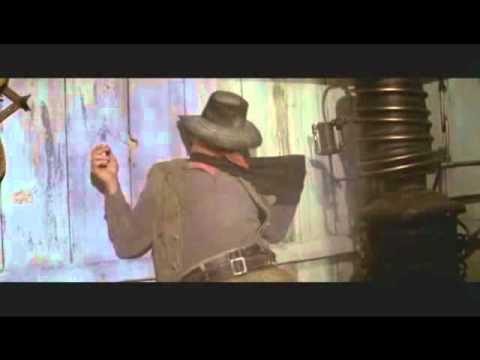 28
Why was Kurosawa the first director to shoot the sun?
6
The first human robot?
6
When did theaters first start showing matinees or giving matinee discounts?
8
How were zombies first depicted in film?
3
Reasonable metric for "popularity" in movies
25
What is the sweariest movie ever?
22
What is the world's first movie?
2
Did Darth Vader do the first one-armed lift in the movies?
3
What did the writers mean by this detail in one scene of one episode of "Alfred Hitchcock Presents" from 1957?