What's the meaning of the hangman game in the phone booth in Fargo?

In the latest episode of Fargo "Loplop" (S02E08), there is a hangman game in the window of the phone booth that Ed Blumquist uses to call the Gerhardt family.

What is the answer to this puzzle and is there any significance to the story? 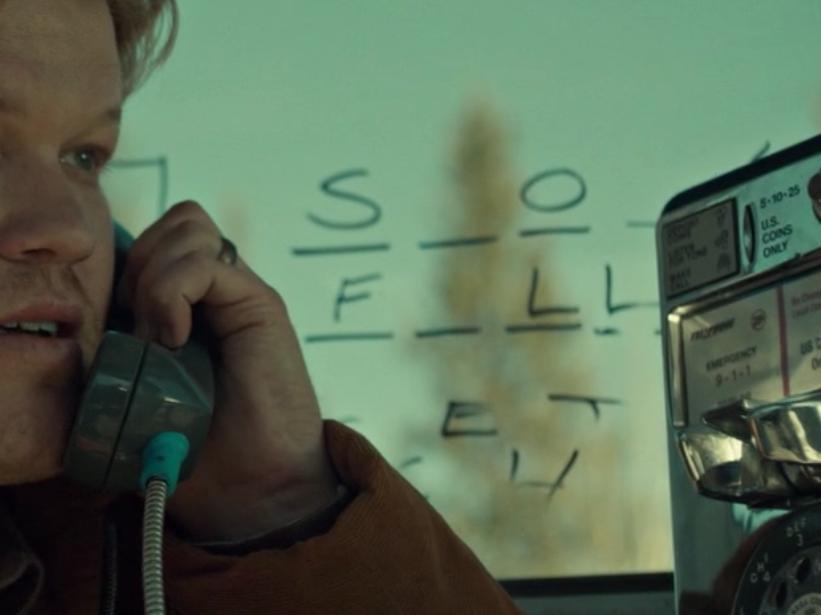 From another angle, it's easier to see the first word ends in X. This is an allusion to Sioux Falls.

Season 2 is a prequel to season 1 taking place in 1979 in Luverne, North Dakota, across the border from Sioux Falls, South Dakota. In it, Lou Solverson investigates a case. The thing is, future Lou already mentioned the case back in season 1, as did fellow cop Ben Schmidt. In season 1, episode 3:

And later in the episode, Lou reminisces about Ben:

Lou: Yeah, we had a deal together once in Sioux Falls. Joint task force situation. Boy, that was a rodeo.

More about the nature of the case is revealed in episode 9 of season 1 (here's a video):

Lou: Had a case once. Back in ’79. I’d tell you the details, but it’ll sound like I made them up. Madness, really.

Lou: Yes, sir. One after another. Probably, if you stacked them high, could’ve climbed to the second floor. Now, I saw something that year I ain’t ever seen, before or since. I’d call it animal. Except animals only kill for food. This was... Sioux Falls. Ever been?

So apparently, season 2 is building up to a massacre in Sioux Falls. And it's entirely possible this will be based on a real event that took place in 1973. Bustle.com elaborates:

This season, we've time traveled from 2006 back to 1970s — the decade of the Sioux Falls Massacre. In Season 1, Lou Solverson (Keith Carradine) referenced the crime and described it as the reason he left his job on the police force. Patrick Wilson has now taken over the role of Lou and this infamous crime will be crucial to the Season 2 plot.

The massacre occurred in 1973, and it was just as disturbing as it sounds. According to The Des Moines Register, three brothers impersonated police officers and targeted a group of teens who were hanging out and smoking a joint in the woods on the Iowa-South Dakota border. By the end of the night, they had murdered four and kidnapped and raped the fifth. The sole survivor — who was just 13 years old at the time — was instrumental in bringing the killers to justice and having them convicted of their heinous crime.

You can read more about the real life case in the original article here.

Not the answer you're looking for? Browse other questions tagged analysis fargo-tv .

21
Are the events depicted in FX's Fargo TV series really true?
5
What does Grimly's neighbor say to Lorne Malvo?
10
What is the significance of the wolf in last episode of the first season of "Fargo"?
16
The meaning of the adopted African boy in Fargo?
10
Is the money meant to link Fargo the TV series and Fargo the movie?
4
What is this machine/instrument in Fargo?
2
Who is Mr. Wrench working for at the season 3 ending of Fargo?
10
Meaning and purpose of the flying saucer in Fargo season 2
53
Why did Tony Stark use a normal flip phone?