Who are the office workers in Panem?

In the Hunger Games films, the nation of Panem is split rather sharply into two:

That gives us the working class and the upper class. What about the middle class? Every empire needs its bureaucrats, administrators, people in offices doing paperwork. Where do such people come from? This demographic doesn't seem to fit either the Capitol or the Districts. 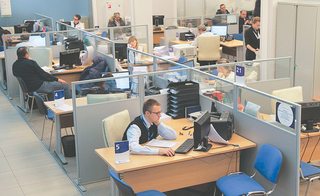 District 13, which seems to be an entire mini-society of its own, incorporating workers, soldiers, administrators, and a president, and organised on a militaristic basis. For the first two films at least, the Capitol and the other twelve Districts function as a country by themselves.

Panem is not so black and white in terms of it's people and careers. Most of what we know comes from Katniss' observations, as the book is only told in first person narrative, and overviews from the movies. The nation itself is small population wise, and technologically advanced, both reducing the need for middle-men white collar classes. The Capitol, according to it's In-Universe Marketing website http://Capitol.pn, only has a population of 96,463. District 12 in comparison had 8,000. Panem works under a controlled capitalism, with a mostly free job market, and various levels of work and class statuses. People are somewhat free to work and earn money (except they lack free movement between districts).

First, while the Districts are virtual slaves to the Capitol, they are not utter-slaves. They are given some leeway, as long as the laws are followed and the Capitol gets the resources it wants. District 12, the Coal Miner District for example, did not enslave people to work in the mines, it was simply the biggest industry. There was the poor working class in The Seam, like Katniss' family, and the upper class Merchants, like the Mayor, and Peeta's family. Peeta's family owned a bakery, showing that capitalism and legal independent jobs are available. The Mine was state-controlled, but still payed the workers. The mine was restricted to 18 year olds and older, but was not a forced job. The pay was reduced during Catching Fire, when the new, stricter peacekeeper regime took over (Snow punishing Katniss for her actions). Note that Katniss' mother used to be in the higher Merchant class, as a healer/nurse, and married down to Katniss' father, a miner. Other forms of pay for families would be tesserae, additional entries by a child of Reaping age in exchange for extra food and oil, something that only poorer districts did in numbers, and only the poor of those districts. The Mayor of District 12's daughter, Katniss' friend Madge Undersee and Peeta did not need to do so as they were (relatively) wealthy.

So while District 12 is poor, it is not just poor coal miners. The Mayor and his staff are from District 12, overseen by the Capitol, mainly in the form of Peacekeepers. Independent businesses exist, filling support roles. A real world comparison, Detroit is known for cars, but the auto industry is not the only job in Detroit.

Peacekeepers themselves are not Capitol workers either. They mainly come from District 2, the "lap dog" of the Capitol. District 2 is known for it's Masonry (Stone Work), but had multiple roles. The quarry workers as the lower class, still paid, but like 12's coal mines, is backbreaking work. The Capitol, after losing District 13 as it's military power base, established "The Nut" in the Rocky Mountains of District 2, and offered well paying jobs to those that worked there. Peacekeepers are mainly recruited from District 2, and serve throughout all of Panem. These are all paid positions, though the pay and food is not always enough. Katniss used to sell illegally hunted animal meat to some Peacekeepers in District 12, and the old Head Peacekeeper for District 12 Cray even openly bought from the District 12 blackmarket "The Hob".

Finally, the Capitol. We see a mixture of Capitol citizens, both the upper class, the middle class, and the actual slaves. There is an upper class, which in the real world can be considered the 1%. These are the ultra rich with whom Haymitch mingles for sponserships for Katniss and Peeta, and who hobnob with President Snow. These are the ones that Snow had pimped out Fennick for political gain. The middle class are the artistic jobs. Caesar as TV Show Host and political mouthpiece for the Capitol is one notable one. Other jobs are Escorts (Effie), Stylists (Cinna, Portia), Prep Teams (Flavius, Venia, Octavia [Hair, Makeup, Nails]), and Gamemakers (Crane, Plutarch). Each of these are careers, jobs that must be earned and perform well to keep. When they start these jobs for the Hunger Games, they start at the bottom, and are assigned the poorer Districts. Only by working hard do they move up to better, richer districts. All of these people are from the Capitol. The Gamemakers are the best example of the question, as they are shown to be much simpler looking compared to the overly extravagant upper class. Cressida, a director, and Castor are part of this. In Mockingjay Part 2, they are explicitly shown by the Capitol's "dead tribute" announcements to be from the Capitol. Another example is Tigris. She was a Stylist in the Hunger Games, but was removed because "Snow thinks I'm not pretty enough" (She, like many Capitol citizens, took to extravagant looks and ended up looking like a Tigress-Human hybrid. The Capitol has an extensive body mod culture.) She ends up running or owning a fashion boutique, that Katniss and Squad 451 take refuge in.

A few special cases are Avox. These are actual slaves, typically political dissenters of the Capitol who have their tongues cut out and forced to work. Pollux, Cressida's Cameraman and brother to Caster, was forced to work underground in the Capitol's support tunnels for five years until Castor could buy his freedom. There are two other named Avox in the series, Darius (book only), a Peacekeeper that tried to stop Gale's whipping in Catching Fire, and Lavinia, who escaped from the Capitol but was recaptured, and forced to serve as a servant for the Tributes in the first book.

TLDR; Workers in Panem are typically from their own districts (except for Peacekeepers), and are not homogenous in appearance or careers.

And if you apply a typical government employee to population ratio of 237 : 10,000 residents, the Capitol only needs 2275 employees. That includes fire and police, but not teachers.

Not the answer you're looking for? Browse other questions tagged the-hunger-games .

8
Is the Tribute selection in The Hunger Games rigged?
4
Could the twelve districts support the Capitol?
1
Who is the boy from Katniss' hallucination?
5
Extra meaning in “Panem”
7
Who is Katniss' love interest?
0
In The Hunger Games what would happen if the tributes all decided to not participate?
2
Do Panem citizens know of their Roman namesake?
5
Does the rest of the world know what's happening in Panem (do they even care)?
3
Who did Finnick marry in the final Hunger Games movie?
3
Regarding The Hunger Games' festive environment