How did they make the shimmering colours when Mork calls Orson?

At the end of every episode of Mork & Mindy, the alien visitor Mork calls his boss Orson to give a report. The show depicts the call by having Mork chant, "Mork calling Orson. Come in, Orson!" as the camera zooms in on his face. Soon this shot dissolves into a bundle of vivid colours which shimmers and undulates. The object is semi-transparent, making it appear three-dimensional.

The following animated GIF, produced from this YouTube clip, gives some idea of the effect, though neither of these match the quality of the DVD:

Given that the show premiered in 1978, I assume that this effect was produced with analogue equipment. How exactly was it done (or if nobody knows for sure, how might it have been done)?

The special effects were created by a company called Laserium'. Simply put, the "hologram" you see when Mork communicates with Orson is simply a series of "dyed" (e.g. colour-filtered) lasers, passed through a rippled piece of glass and projected directly into the camera lens.

"One last secret we'll give away is how we produce the beautiful clouds and aurorae. This is actually our simplest effect. All we do is shine the laser through rippled plastic or glass like you might find on a shower door or a bathroom window. Move the plastic slowly in front of the beam, and the cloud comes alive" - http://www.laserium.com/Inside.html 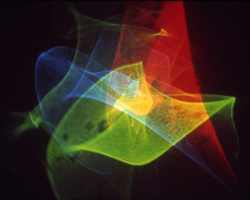 Not the answer you're looking for? Browse other questions tagged film-techniques effects mork-and-mindy .