Has there ever been a chain of art imitating life, and life returning the favour, like the one involving the film Taxi Driver (1976)?

The 1976 film Taxi Driver featured the character Travis Bickle, whom screen-writer Paul Shrader based on Arthur Bremer, who tried to assassinate presidential hopeful George Wallace in 1972 to impress a girl.

In Taxi Driver, loner Travis Bickle (played by Robert DeNiro) planned to assassinate a local politician to get back at a girl who campaigned for him. The film also starred a very young Jodie Foster, whom real life loner John Hinckley, Jr started stalking, and in 1981, he tried to assassinate Ronald Reagan to impress Foster, by emulating the film that launched her career.

Hinkley confessed to watching Taxi Driver more than 15 times. When clips of the film were shown in his court case he seemed engrossed in the scenes (here and here).

Question: Has there ever been a similar or longer chain of art imitating life, and life returning the favour, than this?

"To protect and serve":

LAPD cruisers were emblazoned with the department's motto: "To Protect and Serve". Because so many films and television shows are produced in LA, those shows and movies began to use the slogan on police cars onscreen. Because the slogan was so familiar from entertainment, other police departments adopted it and painted it on their own vehicles.

After 9/11, Afghanistan was invaded, but Osama bin Laden managed to escape detection. The world was told that he was probably still somewhere in the remote mountains in the east of that country. On an episode of the hospital comedy Scrubs, the janitor says that if he were in charge, the search would focus on Pakistan. Where was bin Laden eventually discovered? Pakistan.

Stephen King was an angry loner in high school. Later, he wrote the novel Rage based on his experiences in school. The story is about a misfit high school student who snaps, brings a rifle to school, takes hostages, and kills several teachers. The book has since been allowed to lapse out of print after a number of school shootings were linked to it:

Be Cool:
(Life imitating art imitating life and fulfilling its prophecies about itself)

The movie Get Shorty, based on the Elmore Leonard novel, was a big success. It was a story of Chili Parmer, who was a loan shark and goes to Hollywood to collect vig from a movie producer and ends up selling his own story and becoming a producer. It was such a big hit that it’s sequel Be Cool was made. The sequel was about the sequel of the film in the previous film. In the movie, it was shown that the sequel crashed at the box office and is certainly what happened to Be Cool. So this is an example of life imitating art unknowingly.
- Source

Be Cool lampshaded the fact that it was a sequel and that sequels are often worse than the original. Rather bizarrely, audiences agreed.
- TV Tropes

Take Sidney Lumet’s Dog Day Afternoon, which tells the story of two young, down-and-out guys who attempt to rob a bank and end up in a protracted hostage situation neither is equipped to handle. The movie, which stars Al Pacino, is based on the true story of a man named John Wojtowicz, whose idea to rob a bank came in part from a matinee of The Godfather: Pacino’s performance inspired a criminal that Pacino later played. Last year, the directors Allison Berg and Frank Keraudren made a documentary about Wojtowicz called The Dog, which focuses less on what Wojtowicz did than on who he was: a Goldwater Republican turned gay activist, a Vietnam vet, and a father of two who ended up marrying a transgender woman — a story not just about Wojtowicz’s shifting personality, but about the shifting nature of personality in general.
- Source

Fans of Star Trek wrote so many letters to NASA, that eventually, they did name the first full-scale prototype Space Shuttle Enterprise. The shuttle subsequently appeared in a mural in Star Trek: The Next Generation and the opening credits of Star Trek: Enterprise, implying that in the Trek universe the starship was named after the shuttle which was partially named after the previous ships bearing the name Enterprise like the WWII U.S.S Enterprise carrier making this Art Imitates Life plus Life Imitates Art.
In one Expanded Universe novel, Kirk actually commanded the space shuttle Enterprise.
- TV Tropes

Back to the Future II:
(Life imitating art predicting life)

In BTTF II, Marty McFly, a teenager living in 1985, goes to the year 2015. He finds a culture somewhat like ours is in the real 2015. It appears that nostalgia for the 80's has become a fad. In our own (real) world, we went through a 1980's music nostalgia fad about 15 years ago, which saw the reunions of many 80's bands, from Blondie to Missing Persons, among many more, and a subsequent 80's fashion and music nostalgia fad just a few years back.

And when the date of Marty's fictional arrival in 2015 happened last month, people went crazy with nostalgia: USA Today wrapped that day's edition in a replica of the cover of the newspaper that Marty read (minus references to a US visit by "Queen Diana"); Nike released the first pair of self-lacing "Air Mags" sneakers as featured in the movie; and Pepsi released a limited edition run of "Pepsi Perfect" as seen in the film.

Most remarkable of all, the much maligned "lovable losers" of MLB, the Chicago Cubs, made a rare appearance in post-season play, with a real shot of making it to the World Series for the first time in over a century. BTTF II had predicted that the Cubs would win the series. The choice of the Cubs was based in part on the director's fan loyalty, and in part upon the fact that it was such an absurd prediction - the Cubs never win the series. They didn't actually make it to the series, let alone win it but the fact that they came so close was notable enough to attract BTTF II-related headlines around the world, including all the countries that couldn't care less about baseball.

Characters use devices that are essentially iPads in the epic film 2001: A Space Odyssey 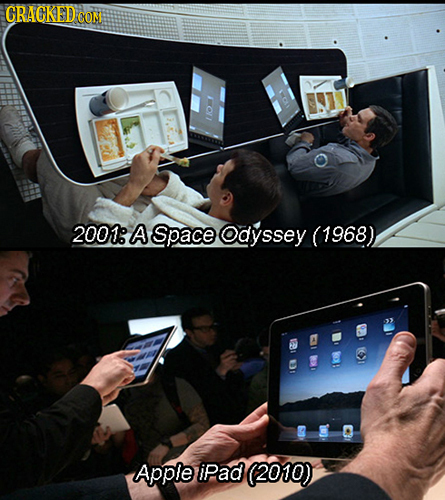 Obviously, iPads now exist, and iPhones share many of the same functions. And if you repeat one of the lines from 2001 to Siri - "Open the pod bay doors" - she gets very upset.

In the film Game of Death, Bruce Lee plays an actor performing a role. The actor is killed when a stunt involving a prop gun that is supposed to be firing blanks malfunctions. The actor played by Lee is killed. Lee died halfway through filming, and the producers made the bizarre, distasteful, and morbid decision to use footage of Lee's actual body lying in its casket in the movie, which was released five years later.

Twenty years after that, Bruce's son Brandon was filming The Crow when he, too, died young. Incredibly, he was killed when a prop gun that was supposed to be firing blanks malfunctioned. On top of that, he was playing a character who was shot to death (twice in the movie, once in the graphic novel source material).

The 1969 film Marooned is about a spaceship malfunctioning and leaving the three astronauts unable to deorbit with dwindling oxygen and other resources. The movie was seen in the theatre by Jim and Marilyn Lovell. Marilyn then had a nightmare where her husband was in that exact situation. Three months later, Jim Lovell captained Apollo 13.
- TV Tropes

As everyone knows, the Apollo 13 mission met with near disaster when a malfunction caused an explosion, and the crew barely managed to get back to earth safely; the story is told in the film Apollo 13.

An Alan Smithee Film: Burn Hollywood Burn had such a Troubled Production (a Sylvester Stallone movie in which the film is recut without the director's permission into an incoherent mess that the director then tries to disown and finally sabotage) that it almost turns into a documentary about itself. Most notably, the director was so dissatisfied with the film that he got his name removed, meaning that a film where the main character is named "Alan Smithee" had an actual director credit for Alan Smithee (because at the time, it was the only name directors could use to distance themselves from their projects. This led to the Director's Guild discontinuing the practice of using that name as a pseudonym; aliases are now selected on a case by case basis).
- TV Tropes

Fanboys deals with a Secretly Dying Star Wars fan who gets to watch The Phantom Menace as a dying wish before it's even released; in November 2015, a Star Wars fan suffering from terminal cancer would get to watch an unedited print of The Force Awakens before passing away shortly after.
- TV Tropes

This is actually the second time J.J. Abrams has allowed a dying fan to see one of his films before it was released; the first case involved Star Trek: Into Darkness.