I saw a movie when I was about 5 years old, and the cartoonish antagonist in it became the monster under my bed. Here's what I remember:

It's The Creature Wasn't Nice (AKA Naked Space AKA Spaceship) from 1981 with Leslie Nielsen.

When the spaceship Vertigo stops to explore a previously unknown planet, the crew finds an unrecognized dollop of protoplasm and takes it aboard ship to return it to earth for analysis. On board, lifeform expands into an oozing person-eating monster which communicates primarily by means of a Vegas lounge act. The crew is gobbled up one after another until the two surviving crewmembers come up with a plan.

The movie is a low-budget comedy with simple sets and dialog wrapped around several musical numbers. In one of the scenes, the red slimy one-eyed alien monster performs a lounge-act style musical number called "I Want to Eat Your Face."

Here's the song, and here's your little friend: 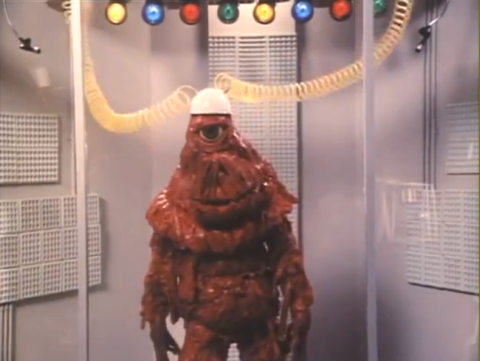 Not the answer you're looking for? Browse other questions tagged identify-this-movie science-fiction comedy .