How is Paul Walker's character regenerated in Furious 7?

After watching Furious 7, I was amazed that throughout the movie I didn't feel that Paul Walker didn't complete the film but yet his presence is not felt anything like virtually created. How was this actually?

I heard that his brother was taken for some shots and a body double was used but some articles say that his body and face is computer generated. It feels so real. So did we make enough advancement in cinematography that we can now virtually create real people through CGI?

The most recognizable scene of CGI is the photo shown below of Walker's brother in as a body double and Paul's actual face on the body double.

Viewers who pay careful attention will note that the majority of Walker’s unfinished scenes are completed using his brothers Caleb and Cody as doubles. When combined with CGI, carefully chosen camera angles and the right lighting, they are the spitting image of Paul. 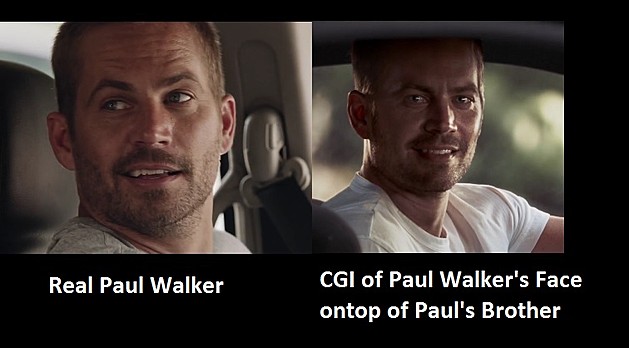 Walker is not the first actor to get temporarily revived through visual effects. Oliver Reed was digitally recreated for his unfinished scenes in Gladiator when he passed away during production and Nancy Marchand had one final scene on The Sopranos after her death. And then there are the countless commercials that resurrect iconic celebrities like Steve McQueen and Bruce Lee to hock modern products.

Today, it's possible to create an actor entirely from digital composites. The Mill, for example, has completed a 90-second Johnny Walker ad featuring a CG Bruce Lee for agency BBH in China. "We created his entire face in CG and hand-animated that, using shots of the actor for reference," says Shenfield. He believes that a CG actor is an option, as long as artists can create his face convincingly. "The eyes require a lot of work," he says. "Keeping motion continuous in the musculature and the eyes is the key to making it look real."

Short answer yes we have progressed that far with technology that we can recreate people, and has been done previously in an Advert for Galaxy chocolate where Audrey Hepburn's face is recreated and placed on another actress

Also in Ant-Man the younger face of Michael Douglass is placed on a doubles body.

Not the answer you're looking for? Browse other questions tagged effects fast-and-furious-franchise furious-7 .