Is man capable of tearing off a car trunk lid as shown in U.N.C.L.E.?

As far as I understood, The Man from U.N.C.L.E. was not a science fiction movie. However, the scene where the Russian agent is chasing after the American agent and the girl, the agent tearing off the car trunk just did not make any sense to me. Is that even nearly possible?

It's possible. The car in the scene is a VEB Sachsenring Trabant, a weak POS, in terms of both power and construction. This explains why Illya Kuryakin was 1) able to slow down the car when Gaby and Solo were trying to drive off, and 2) rips the trunk lid off. From wiki:

The Trabant was a steel monocoque [Supported by it's skin, like an eggshell] design with the roof, trunk lid, hood, fenders, and doors made of Duroplast. Duroplast was a hard plastic (similar to Bakelite) made of recycled materials: cotton waste from the Soviet Union and phenol resins from the East German dye industry. This made the Trabant the first car with a body made of recycled material and was partially responsible for the misconception that it was made of cardboard (it was dubbed Zwickauer Rennpappe, i.e. "Zwickau racing cardboard"). The Trabant was the second car to use Duroplast, after the "pre-Trabant" P70 (Zwickau) model (1954–1959). 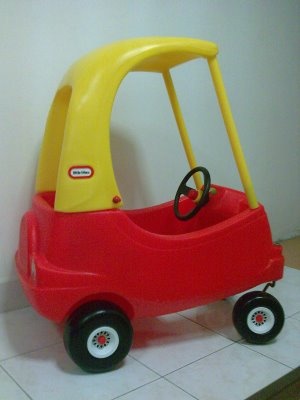 That said, 1) The car was on its rims, and 2) Solo and others later comment that Kuryakin is abnormally strong. In the scene following this:

Solo: What was waiting for me was barely human. You should've seen it run.
His Handler: Grow a spine, Solo. Contrary to what you may think, we are not in the haberdashery business.
Solo: I don't think you understand. It tore the back off my car.

Following that, Kuryakin and Solo "fight" in the bathroom, with Kuryakin seconds away from choking Solo to death within seconds of seeing each other.

Kuryakin is very strong and quick to fight and very good at fighting. The scene is meant to contrast him to Solo, who is calm and cunning.

While he was running he grabbed and removed it. Well, I don't think it's possible even for a muscled man.

It is an exageration from the director to show how powerful he is, but logicaly while he was running and grabbed the trunk of a moving car and removed it, it's hard to happen because you need a lot of power.

I've not seen the film, but I think it's more of an in-joke than anything realistic.

The closest parallel in my mind would be a similar scene in Goldfinger where Bond throws the golf ball he switched to Oddjob. Oddjob then shows similar (superhuman) strength by crushing the golf ball in one hand.

Given the original Man from UNCLE was as much spoof as spy series I'd imagine they're riffing on this.

Not the answer you're looking for? Browse other questions tagged realism the-man-from-u.n.c.l.e .

10
How realistic is the brainwashing shown during Season 3 and 4?
5
Who is the man from U.N.C.L.E.?
6
External justification in The Man from U.N.C.L.E
11
Contempt of court in “Roman J. Israel, Esq.”