In the season 2 episode of Rick and Morty, "Total Rickall", there is an alien parasite that disguises itself by implanting false memories in people's minds. The first parasite to be revealed is Uncle Steve (who has never appeared in the show), when Rick shoots him. The audience is then led to believe that Mr Poopy-Butthole, who has also never appeared in the show before, is also a parasite. This becomes more evident as more parasites start to appear in the quarantined house. By the end of the episode, the family have killed all the parasites, leaving only themselves and Mr Poopy-Butthole. Then Beth shoots Mr Poopy-Butthole, believing him to be a parasite, but it turns out that he was real.

If Mr Poopy-Butthole is real, and Uncle Steve is dead, who or what was the original parasite?

TL;DR: It appears that Uncle Steve was the first parasite, and we also know how the parasites got into the house: Rick inadvertently brought them in.

In episode 202 - Mortynight Run - we see Rick loading his spaceship with green rocks. 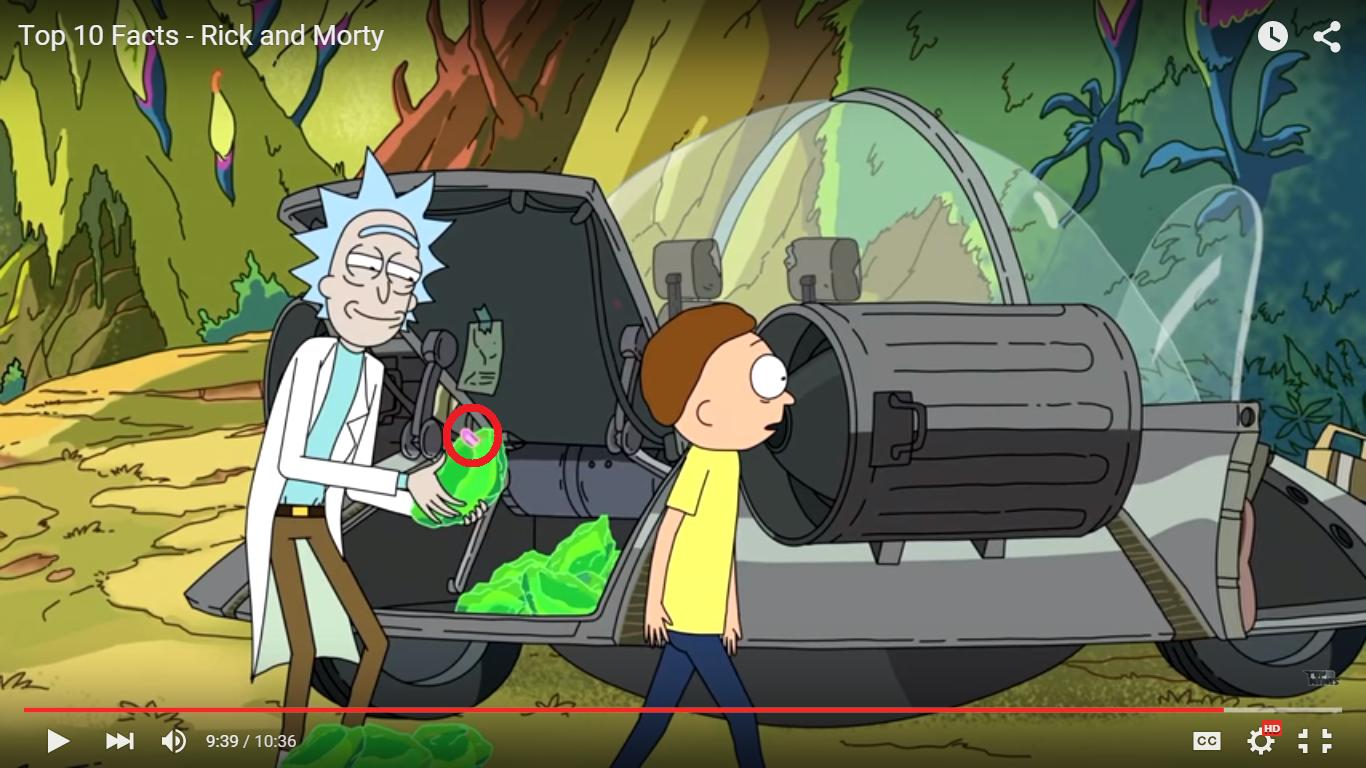 Note the pink nodules on the rocks - they are, as co-creator (and the voice of Rick and Morty) Justin Roiland pointed out via Twitter, the pods housing the parasites. 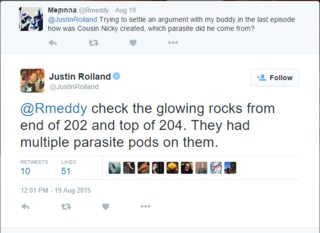 At the beginning of episode 204 - Total Rickall - we see Rick disposing of the rocks. This subtle Easter Egg is all the more ingenious because he does so right over the shoulder of the first parasite we meet, Uncle Steve. 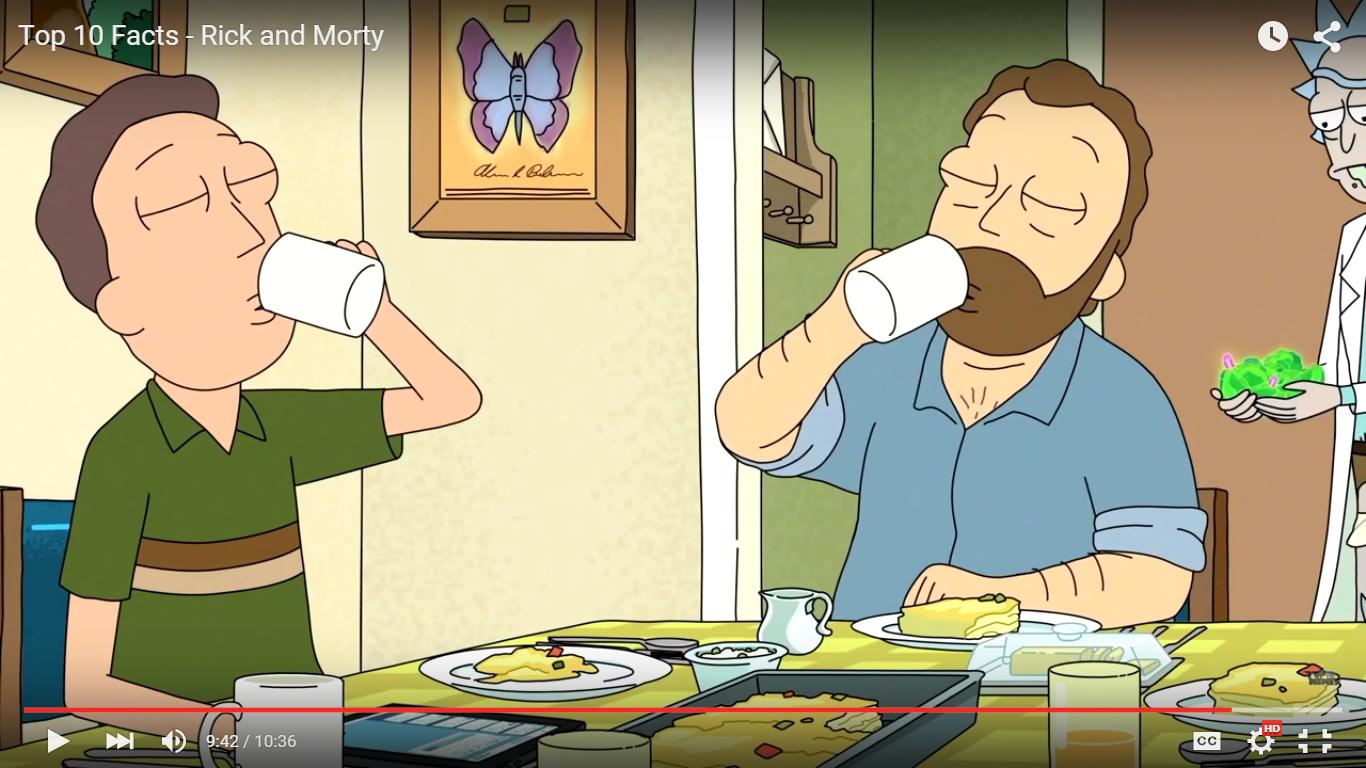 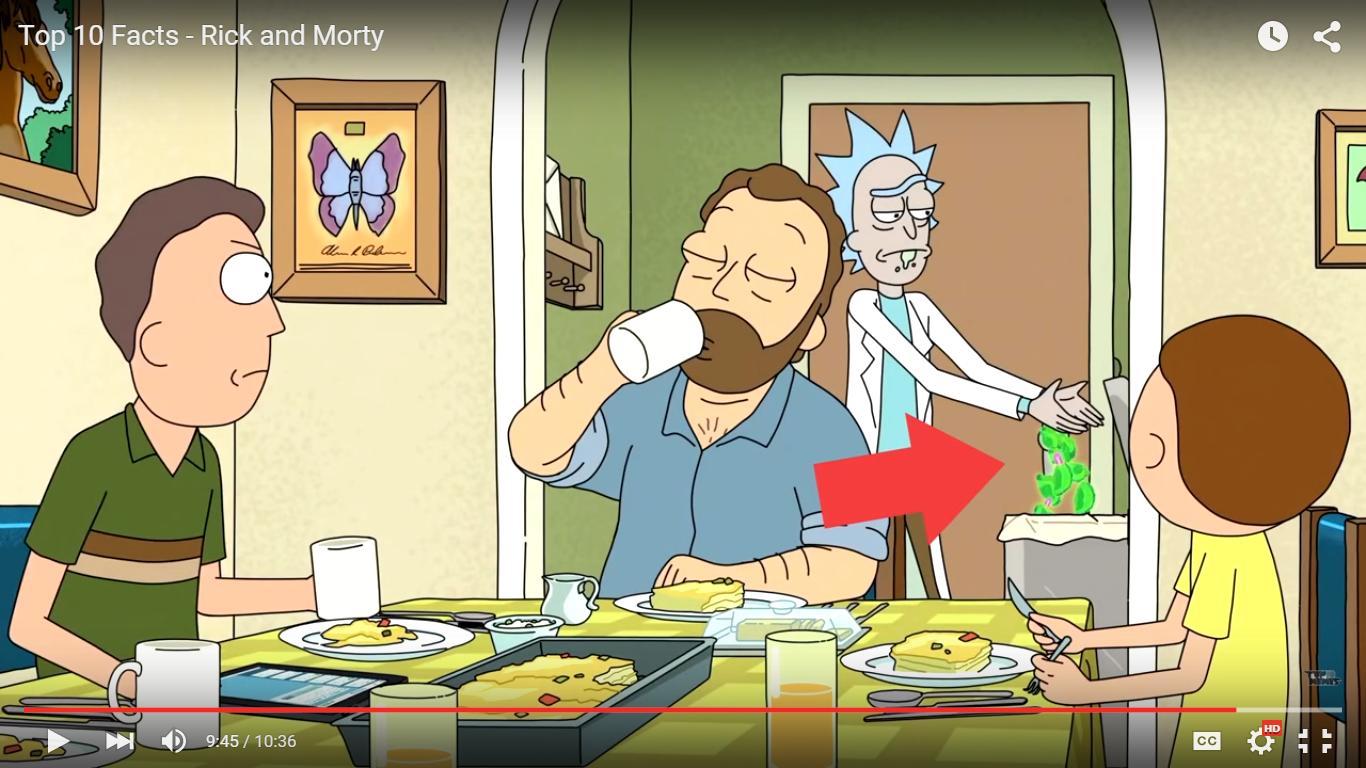 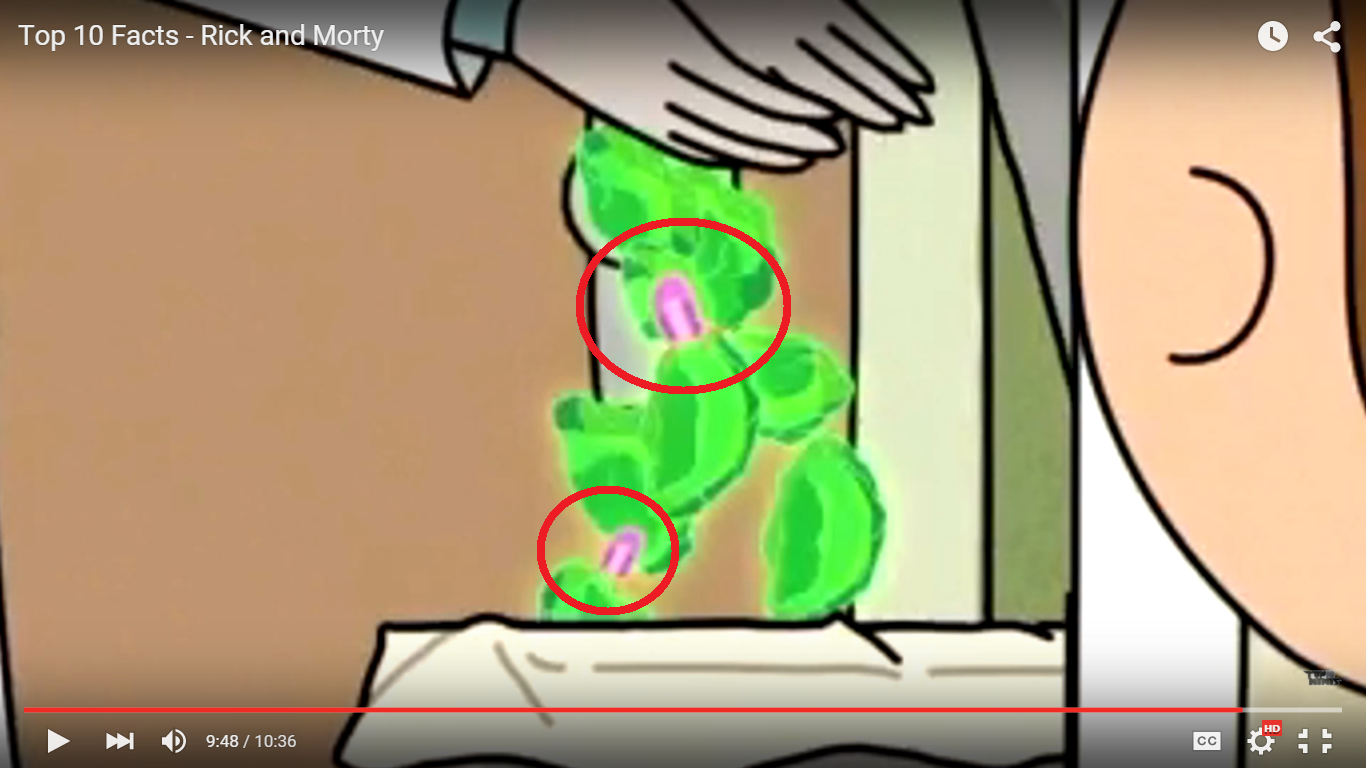 The art director for season two of Rick and Morty, Josh McDermott, confirmed this on his blog:

For the true die hards, if you noticed the green rocks from episode 2 that Rick puts in the trunk of his ship you might have seen a couple pink eggs attached to the rocks, the same rocks Rick throws in the trash at the top of this episode.

He goes on to explain that the fact that the first parasite - Uncle Steve - was alone in having larvae on his back was supposed to clue us in to the idea that he was indeed the original parasite, and had laid other eggs:

The first parasite, post transformation, is the only one with larvae growing off its back, suggesting that others had been laid in the house.

McDermott's concept art for the parasites, including one design featuring writhing purple larvae on its back: 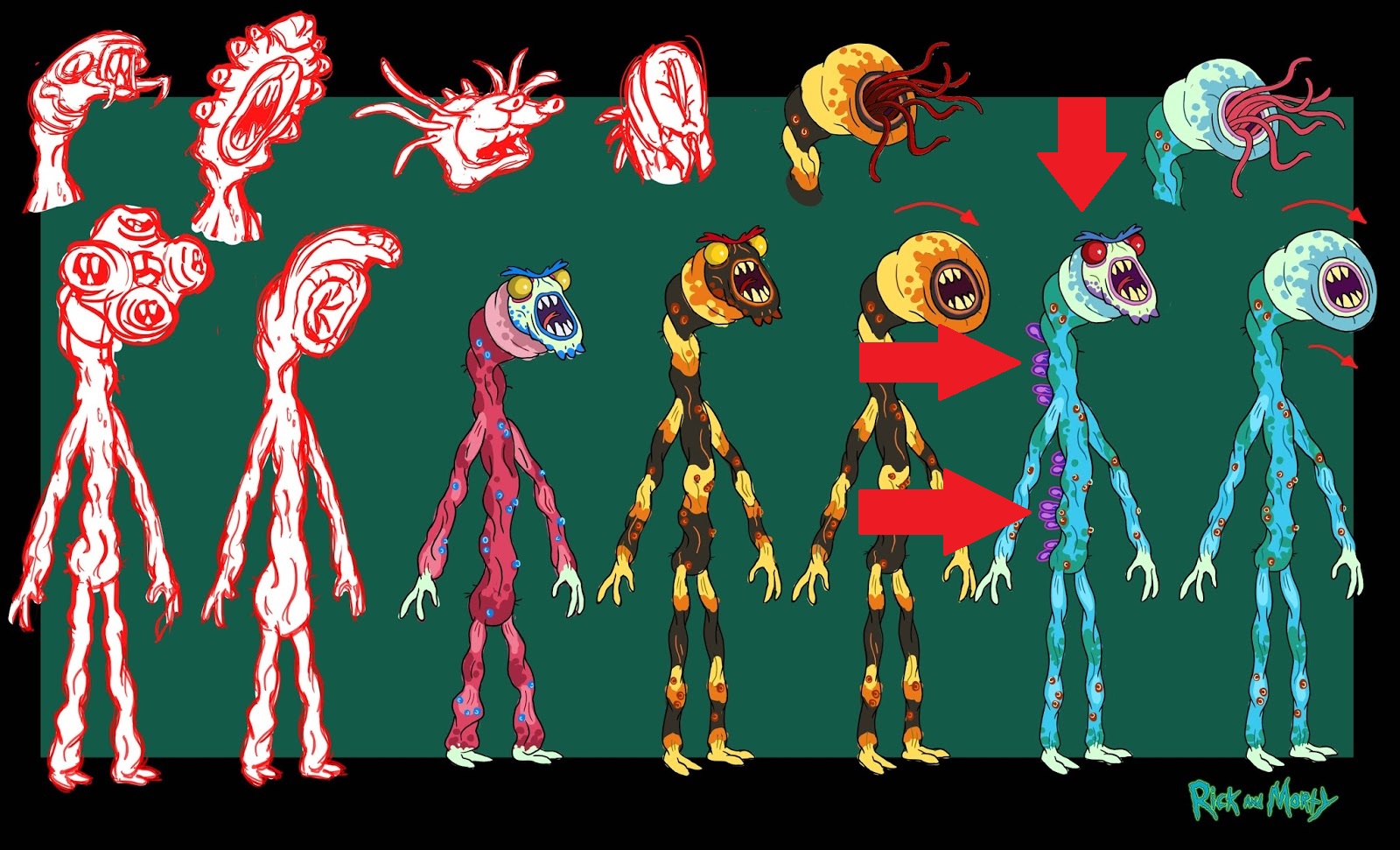 And the corpse of the Uncle Steve parasite, with larvae upon its back (they are now pink, like the pods, not purple, as we see in the concept art): 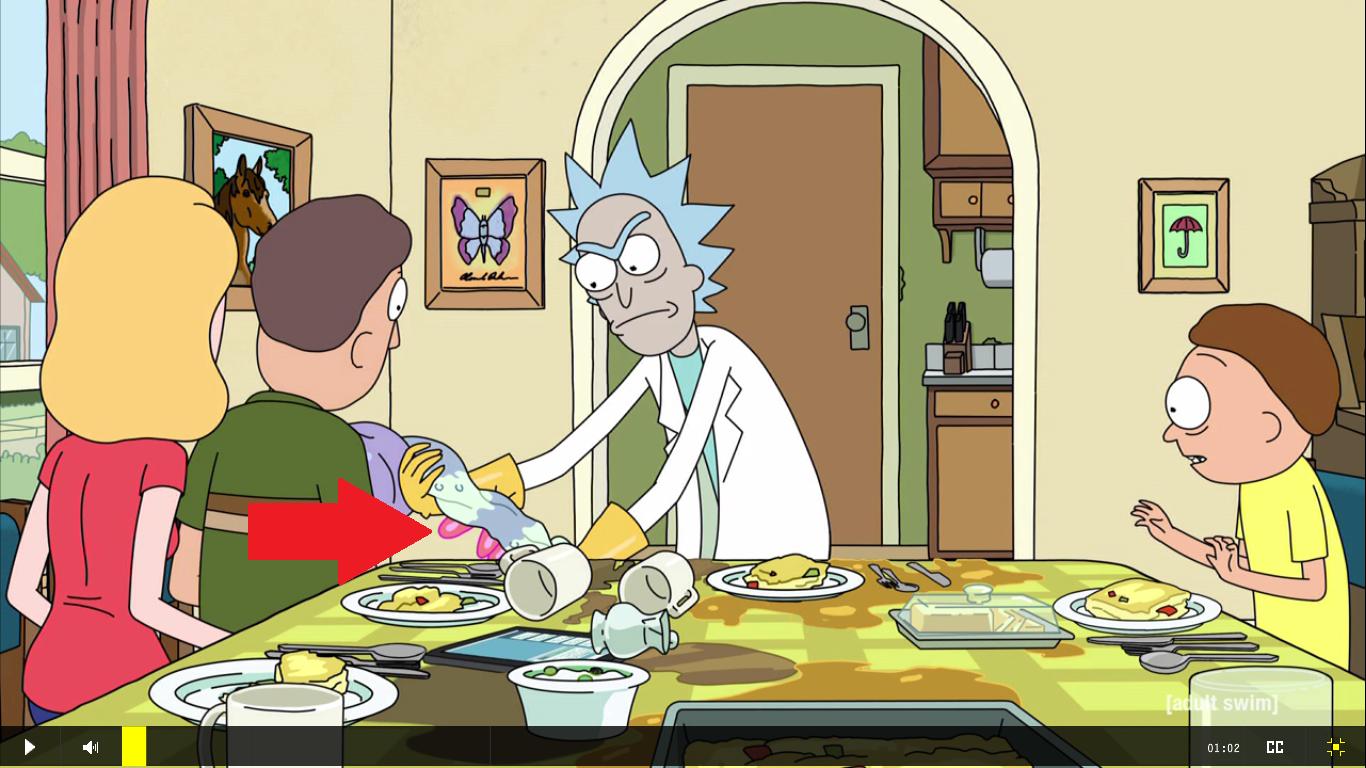 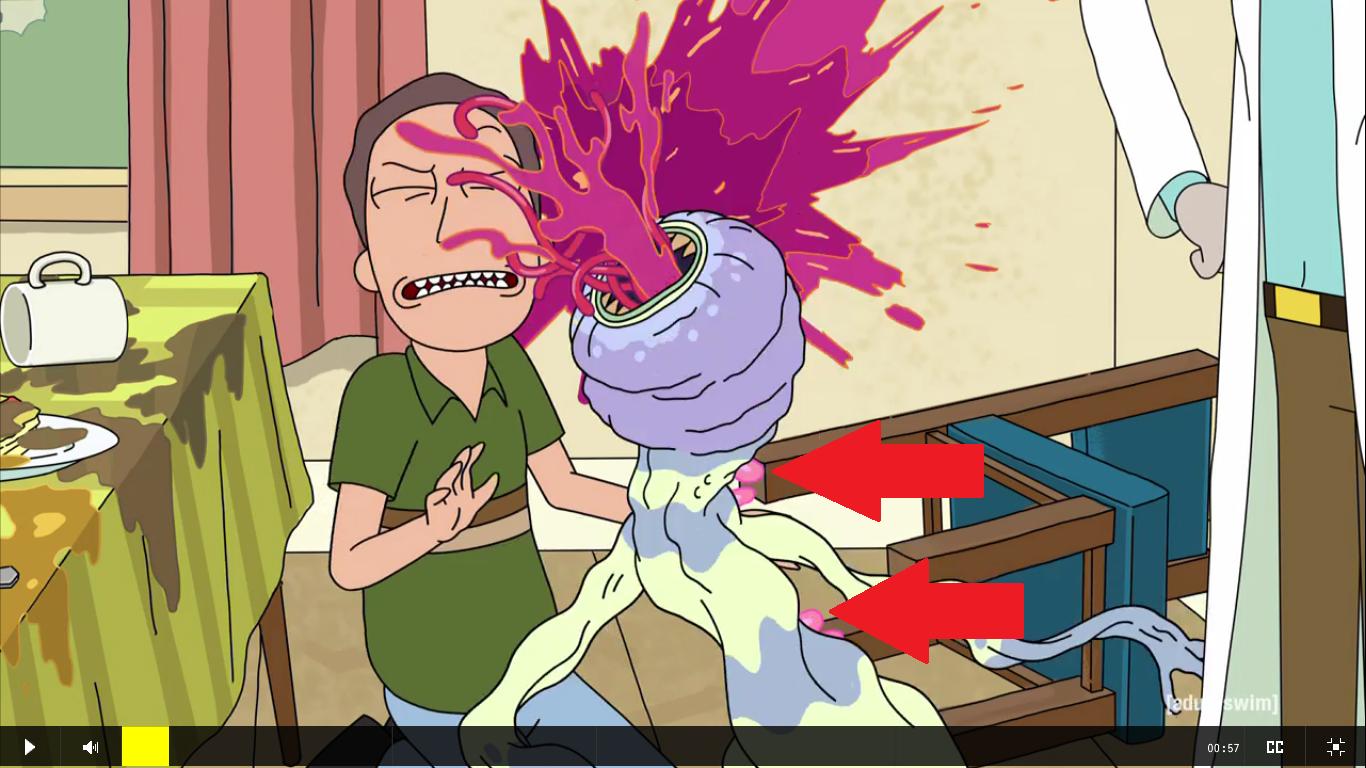 Rick explains that the parasites survive and multiply by implanting fake memories into the heads of others. We do not know if these parasites are in hiding, microscopic, or otherwise before they appear as physical manifestations; this is never explained, so we must make a few assumptions.

The first parasite the audience is introduced to is "Uncle Steve", who is quickly dealt with. Since we are only shown non-parasitic characters until after the title sequence, we must infer that at least 1+ parasites are in hiding, waiting for an open cue to integrate themselves.

Due to the mechanics of the false memories, it is also possible any family member had already met 1+ parasites prior to breakfast with "Uncle Steve", and is treating that encounter as natural, with the physical parasite hiding in a different room, waiting for an introduction to the audience later in the episode.

As their method of genesis and disinfection is never explained, it is possible that any given parasite that appears is the first, and earlier parasites simply took the lead. It can be inferred that "Uncle Steve" was first, and not being disinfected, the family either then generated "Cousin Nicky", or "Cousin Nicky" (and subsequently "Mr. Beauregard") were in hiding, waiting to be introduced.

Truly, within the presented context of the episode, it is not possible to determine exactly which parasite was the "original", or even who brought the parasites into the house.

The best argument I've heard that he is a parasite was that Mr. Poopy Butthole only implanted the memory of being shot, The parasites can't make memories when they are bad, but that doesnt mean they cant make a memory when someone is bad to them.

The audience was led to wait for MPBH to be shot as a finale. When he doesn't transform then the joke is on the audience. Since he is out of quarantine, and the world isn't overrun be parasites, I assume he is not a parasite. At the very least he may be something else that uses memory manipulation to implant memories and mask the fact that he is a living cartoon character.

20
What was Holmes's original plan?
16
Why was plot of Mars replaced in Total Recall (2012)?
31
What was the original ending and why was it changed?
5
Was there a non-parasite killed in Total Rickall?
10
Was that actually the recipe for concentrated dark matter?
5
Why is the world in total chaos?
8
Did Frau Blucher think the monster was the original one?
6
Why was the driver very keen on knowing Jessica's location in Parasite?