Why did Aaron Cross take the watch from the security chief?

At one point during The Bourne Legacy Aaron Cross comes up behind an Austrailian security chief and knocks him unconscious. He then proceeds to take the man's watch, and then leaves the area. In this scene there are lots of people around, it isn't like he had time to mug him.

Why did he take the time to steal the watch?

As the pair were attempting to escape the factory, the foreman ended up just in front of the them, so Aaron took advantage of (either knocking the foreman out, or killing him) to aid their escape and since he was down anyway, Aaron takes the watch knowing its value will probably be needed in the near future, as they are now both fugitives and on the run from the agency's operatives.

Shortly after that scene, Marta takes Aaron to a flophouse to wait through the sickness to come. She had infected Aaron with the virus, to 'viral him out' of the dependance on blue pills. He gets very sick. She is nursing him, wiping the sweat off his soaked brow. He struggles to sit up, even though she tells him to stay down. Aaron sits up anyway.

He then tells Marta that he has $40,000 in the lining of his jacket, there are passports in his backpack, both the ones they used and blank, and that the watch from the foreman is worth (I could not hear if he says $2k or $20k) and that she should take it all and go disappear. She has done enough for him.

One answer is that the watch was valuable (a Rolex Daytona Gold watch, value close to $20,000). Presumably he perceived that he might need it to barter with, and indeed he uses it to pay off the boatman later in the film.

The other, more jaded answer, is product placement. Swiss Watchmaker IWC made the watch that Jeremy Renner wears in the movie - the Pilot Watch Double Chronograph Edition Top Gun. "IWC hopes that Mr. Renner’s portrayal of a thrill-seeking lifestyle of an elite agent will correlate to the brand image." (Luxury Daily)

So if IWC has the starring role, who better than competitor Rolex to feature as a prop which is stolen and used for barter? This is supposition on my part - I can find no article suggesting Rolex was involved in the placement, cannot imagine that they would want their brand used in this way, and am aware that companies rarely pay for a product placement if a competitor is also allowed to advertise in the film.

The watchophiles in both the IWC and Rolex camps are all over this movie in their forums! 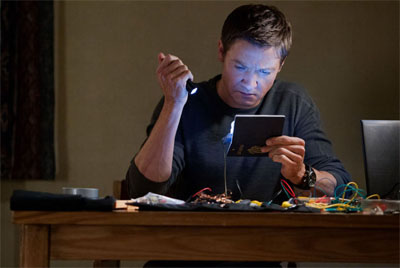 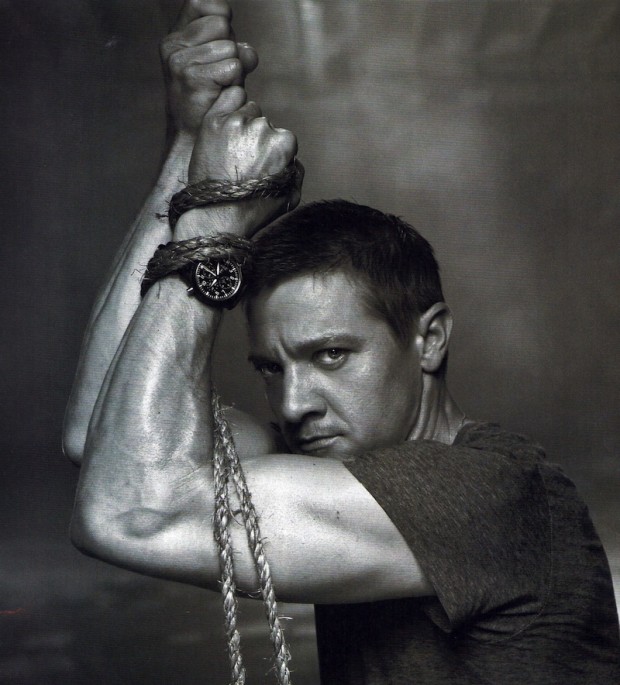 The addition I'd make to the already good answers is that Aaron shows his need for timekeeping earlier in the film when he urgently asked for his watch back from Marta.

As well as the product placement I'd add in that Aaron uses his watch to know when to medicate (something he's clearly religious about to try and stave off reverting to his previous IQ). Having a watch is an addiction so he's always on time with his medication.

The watch sales pitch is clearly in the scenes, but the story line is the fact that Aaron Cross is extremely conscious of keeping his chems on time. Perhaps even taking more of the blue pills (which were intelligence enhancement) than he should. Hence the story about losing his chems to the first contact. He told the doctor how low his IQ was upon enlisting in the service and how adamant he was on not slipping back mentally.

He takes the watch mainly to continue evasion and mislead his pursuers. It's to throw his pursuers off. They don't want a watch thief they hear onlookers talking or even pointing in the direction he wast last seen moving. He's taking advantage of a situation.

Of course the value anywhere in the world to nearly any culture was a bonus if you will which wasn't missed by Cross- which the overly-edited down film (the deleted scenes explain a lot in general ) made a clever point of showing Aaron's use of with one quick shot of it on the wrist of its new owner.

He used the watch as an option for stakes if need be, which again what the person before me stated. Obviously, you weren’t paying attention if you didn’t notice the trade that occurred after the last action motorcycle scene in which he offers the watch in exchange for a one way trip out of town. The IWC is real nice but does not hold a candle to the craftsmanship of a Rolex Daytona, especially 18k. The Rolex movement is made in house just like a Patek Phillipe, Audimar Paiguet, or a Breitling, unlike IWC which probably purchased its movement from ETA.

The pilfering of the watch is completely out of synch and illogical with what is going on in that scene (the act of knocking the security chief out) - also, the idea that Cross knocked the chief out and stole the watch to make it look like a mugging is interesting, but not realistic - the chief's own security crew responded to the chief going down, not local police, and to assume that the local police would know that the chief wore a Rolex and that, because it was missing when (if) they found him, that they would conclude he was knocked out for the watch, and not because the chief knew who Cross was and why he was really there, and ultimately 'move on and not recisitat, thereby slowing the investigation' is not realistic either. The act of pilfering the watch is added to enable the Rolex product placement. The start of the scene showing the Rolex on the captain's/father's wrist phasizes the watch way too much

Not the answer you're looking for? Browse other questions tagged plot-explanation the-bourne-legacy .

1
Why is a special company's product shown through out a film?

15
Why does Aaron Cross lie about being out of medication?
2
Why did Aaron Cross all of a sudden zone out?
6
Was Caesar supposed to have bitten off the neighbor's finger?
5
Was Aaron Cross shot in the shoulder?
1
Cabin wreckage scene: why did Aaron Cross stop digging further?
26
Is Podrick really such a good lover?
2
Who shot Lt. Smith (Wesley Snipes) in the back?
5
How did Rhodes steal Tony's suit if it prevents unauthorized usage in the first place?
3
What happened to the algorithm at the end of the movie?