In The Addam's Family movie do Wednesday and Pugsley murder Tully and Abigail?

In The Addams Family movie do Wednesday and Pugsley murder Tully and Abigail?

So Tully and Abigail had this scheme to steal the wealth of the Addams family. Near the end of the movie they are flung into coffins that close on them and Wednesday and Pugsley are standing there with shovels, then Wednesday says something to Pugsley that suggests they are going to bury them alive.

I wasn't sure whether to take this as a joke or not. Some Wikis I am reading suggest that yes, indeed, they were buried alive. Is this position supported by any other media? (I've never seen the sequel, was it addressed?)

I know Tully and Abigail were "bad" people but to murder them by burying them alive seems like a sort of odd things to have two kids we're supposed to kind of like do. Yeah Wednesday tried to murder her brother in the movie so it's shown that she has murderous tendencies, but it was passed off as a joke and obviously she didn't actually do it in the end.

I thought they left it pretty unambiguous. 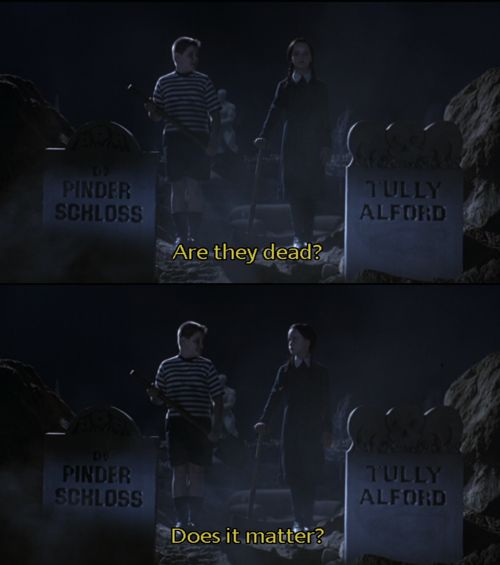 If they didn't die at Fester's hands, then they died at Wednesday's. The Gallows humor in the Addams Family leads us to believe that there is a long line of murder and serial killing, and they view it as normal. While these Addams may not indiscriminately or maliciously kill unlike some of their ancestors, they have no issue with killing those that deserve it, Wednesday in particular.

Note, Margaret Alford, Tully's wife, legally married Cousin It by the sequel. Typically, you can't get remarried if your husband is alive. Even just presumed missing, law typically requires a waiting longer period than 2/3 years we see between the movies.

27
Is it a coincidence that The Munsters and The Addams Family both started in the same week?
6
Why is Morticia overdubbed in this episode of The Addams Family, and what does she originally say?