Was the TARDIS an inspiration for the time-traveling phone booth?

The 1989 film Bill and Ted's Excellent Adventure features a pair of dim-witted teenagers traveling through time to retrieve historical figures to make an oral presentation for their history class.

Bill and Ted use a phone booth as their time-traveling vessel. 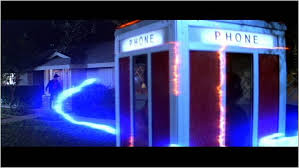 The creators of Bill and Ted's Excellent Adventure originally intended their time travel vessel to be a 1969 van. They were concerned that the van might too closely resemble the Delorean in Back to the Future.

The time machine was initially going to look like a 1969 Chevy van, but the filmmakers decided that was too similar to the DeLorean from "Back to the Future." Instead, they made it look like a vintage phone booth.

The television series Doctor Who originally aired in 1963. "The Doctor" is a Time-Lord who explores the universe usually fighting off some type of threat at different points in history.

The Police Box that the Doctor travels around in is really a Type 40 time and space machine from Gallifrey, his home planet. TARDIS stands for Time And Relative Dimension in Space.

"The Doctor" uses the TARDIS as a time traveling vessel. 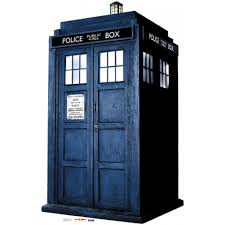 Is there any evidence that the filmmakers of Bill and Ted's Excellent Adventure were influenced by the TARDIS from the Doctor Who series?

In-universe, the phone booth (supplied to Bill and Ted by the Three Most Important People in the World) was in fact the inspiration for the TARDIS rather than the other way around, at least according to the officially licensed "Bill & Ted's Most Triumphant Return" comicbook. 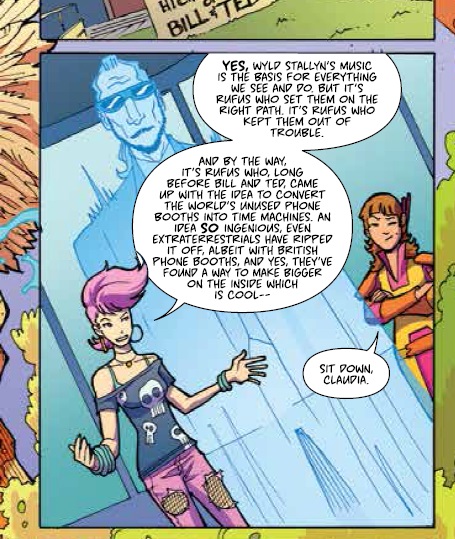 Out of universe, the time machine was originally intended to be a time-traveling Hertz van. This was ruled out as being too close to BTTF's DeLorean and substituted for a glass-sided phone booth for visual reasons, primarily to fit in with the "roller-coaster" theming of the movie.

People were still nervous about the time-traveling van being too much like Back to the Future and a change was needed. The idea for the phone booth was suggested by director Stephen Herek, who was looking for something that would provide the exciting visual nature of a roller coaster ride. Both Ed and Chris really liked Stephen, who told them that when he first started reading the script he put it down, put Van Halen on the stereo, and read it while listening to rock music.

4
Where did they get all of the gum from?
8
Phone calls to the past - The Long Game
12
What was the inspiration for the trampoline storyline in "Aerodynamics of Gender"?
19
Is it a Tardis or the Tardis?
3
Why did they wait until after the report?
13
Which King Henry were Bill and Ted referring to?
5
How did Captain Jack Harkness keep on the TARDIS?
3
Why did Rufus go back in time to help Wyld Stallyns?
8
What is the inspiration for Ducky Momo?
1
Are all Timelords geniuses?