Show recorded in front of public: how does it work?

Some USA TV-series (the most popular ones, I guess) are recorded in front of a public: how does it work? And what about special effects, like green screen and such: how do they handle it?

There are three types of TV shows taped before a live audience, sitcoms, game shows, and talk shows. I'm just going to cover sitcoms; the other two use just one set and don't have the same issues the sitcoms do.

Tickets to sitcoms are free; they are given out at booths in places like CityWalk at Universal City, or you can get them online. Here is a list of current shows that Audience Unlimiteds has tickets for, including Mike and Molly, the Big Bang Theory, and Last Man Standing. You can probably get tickets for the same day for shows with lower ratings, but tickets to the Big Bang Theory are very hard to get, and there may be a long waiting list.

You line up outside a sound stage on a studio lot, like Warner Bros. or CBS Television, and are ushered in about a half-hour before taping begins. Seating (at least on the shows I've been to) was on bleachers, although others use chairs. Above and in front of the bleachers are several large TV monitors, maybe every ten feet or so; these have several purposes as we will see. It was really cold inside, I imagine because of the large lights used to illuminate the sets.

On some shows, there may be a warm up person bantering with the audience, or they may show an earlier episode of the show be running on the TV screens. In any case, they are trying to loosen up the audience a little and get them laughing.

There are typically many sets, if the action takes place in a home, there will be one for the kitchen, another for the living room, maybe another for an upstairs bedroom (which would still be at the same level as the others of course -- any stairs go nowhere). Each set will have a wall missing for the camera and audience to see.

There might also be other sets where the actors go to occasionally (like the store on the Big Bang Theory). These will be placed at the very far end of all the other sets, because they are not used very often. There may also be space for an extra set, again at the end of the others, which can be dressed as necessary to meet the requirements of a particular episode.

The sets are lined up one after another, so the entire group of sets is quite long (so it looks like a train with a bunch of open boxcars.), as are the bleachers or rows of chairs. That means you get the best view when they are taping on the set right in front of you, or on either side, but several sets away right or left, not so good. So they show what one of the camera is seeing on the TV monitors (which one is controlled by someone in a control booth). 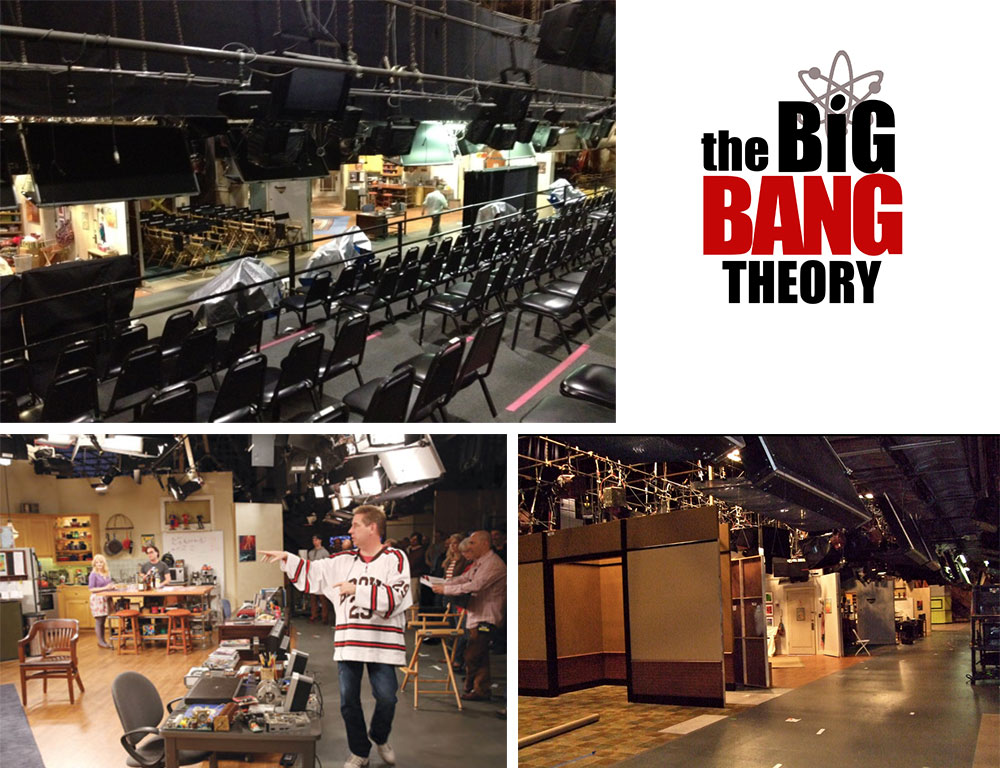 Taping is usually done with three (or more) pretty large TV cameras in a multi-camera setup. Unlike movies, which typically shoot scenes out of order, sitcoms are shot in chronological order because of the live audience. All the cameras have to be moved back and forth between one room and another, so there is quite a bit of delay between scenes in different sets. The sets not being used are usually kept dark.

Each scene may take several takes to get it right, particularly with comedies where the actors may break up laughing. The hard part then is to get the same reaction from the audience since they have heard the jokes already. If they don't, they may have to "sweeten" the laughter during post-production. The director or producer may decide to make minor changes to the script -- for example, if a joke got no reaction from the audience. Or they may change a joke just a little, so it will be "fresh" to the audience for the next take.

At one show I was at, there was a scene that couldn't be done live (no special effects; I believe it was just a scene outdoors). It had obviously been taped beforehand.

When the outdoor scene came up, they stopped the action on the set, dimmed the lights, and played the scene on the TV monitors above the bleachers. In this way, they were able to record our reaction (laughter) to the scene. I imagine the same thing would be done with any scene with special effects. They wouldn't use a green scene except for scenes recorded ahead of time.

Generally shows like sitcoms have few special effects, so this would not be a problem -- they wouldn't be stopping every other scene or whatever. I'm sure there are guidelines given to the writers to cover this.

This whole process may take from three to five hours for a 30-minute sitcom.

6
How do TV shows with live audience manage special effect scenes?
8
What does "filmed before a live studio audience" mean for Cheers?

22
How do they show a tooth-less mouth?
27
Why do professional green screens look so much better?
6
How do TV shows with live audience manage special effect scenes?
4
Technologies used in MI: Ghost Protocol
4
How does a movie director handle an inherently dangerous scene such as the following?
9
What is a "hero plate" and what is its purpose in filmmaking?
6
Do sound effects, specially in horror movies, use emotion initiating frequencies?
1
How did Conan film this episode?