What does the Native American Chief symbol mean in the Hackers movie from 1995?

What does the Native American Chief symbol mean in the Hackers movie from 1995?

How is it connected with hacker culture?

Or is it just a coincidence?

When you are watching the Hackers movie you can see a that a symbol of a Native American Chief shows up from time to time:

At first I thought that it is just a really cool logo of a TV station or something like this. However, there is a series of workshops for programmers (at the University I attend) and their posters look like this:

So I decided to do some research on the Internet but search engines didn't show me anything useful when I typed "native american chief hacker symbol" in as you might expect.

This has nothing to do with Hackers. It's a common TV test pattern.

The Indian-head test pattern is a black and white television test pattern which was introduced in 1939 by RCA of Harrison, New Jersey as a part of the RCA TK-1 monoscope. Its name comes from the original art of a Native American featured on the card. It was widely used by television stations worldwide during the black and white TV broadcasting era before 1970.

It became obsolete after the transition to color TV, but appears on Hackers since it precedes an old Outer Limits episode from the 60s. The test card is occasionally displayed or referenced in other films and shows for its nostalgic value. 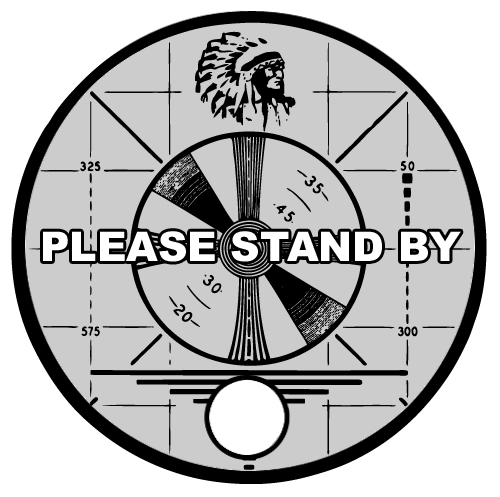 Not the answer you're looking for? Browse other questions tagged analysis hackers .

24
What does the quote from Sgt. Apone in Aliens “Look into my eye” mean?
14
What does the title “Prisoners” mean?
33
What does the symbol V stand for in the movie V for Vendetta?
3
Taps - What does it mean?
28
What does “Ex Machina” mean?
2
What does 'All Stop' mean precisely from the captain?
5
What does JL5 mean?
0
What does Masjävlar mean?
6
What does this symbol represent?
24
Why is there a head of a native American man on the early test screens?