Explain the abilities/powers of this "The Flash" character

In The Flash S01 Cisco (Paco Ramone in comics) basically acted as genius engineer who can build many cool things to help The Flash. Later, near the end of the season, we saw that he might have gotten a super power. As he remembered the incident of getting killed by Harrison Wells in a different timeline and tells Wells about it, Wells mentioned that blast from the particle accelerator may have changed him too. 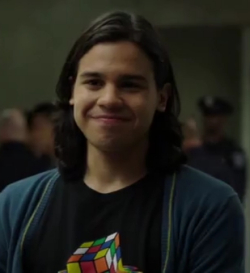 At the beginning of the S02 it has become pretty clear. It looks like he can see things that already happened. He said to Dr. Martin Stein:

Cisco: Something happening to me. Starting to perceive horrible things. Started when Wells killed me in the other timeline. It came back... Then again when Sand Demon showed up. I get a vibe. And then a vision of something that already happened. And then it's gone.

Now the vibe is explained here. He can create shock waves & smash things with it. He has the power to shake the earth apart, undetectable by security cameras etc.

Vibe's sonic powers enabled him to create shock waves of considerable strength. His power could shatter concrete or steel. His agility was above average (and he was a superb breakdancer). Under Batman's tutelage, Vibe became a more skilled combatant.

Vibe's reintroduction in 2013 has sought to establish him as a more powerful character. Part of this was redefining his powers as having to do with interdimensional physics. Justice League of America establishes that Vibe's sonic waves have the power to disrupt the Speed Force, making him one of the few characters in the DC Universe who poses a serious threat to the Flash. For this reason, he is recruited into the JLA by Steve Trevor, which exists to guard against the threat of the main Justice League going rogue. In Justice League of America's Vibe #3, Amanda Waller says "Cisco Ramon might be one of the most powerful super-humans on the planet. He wields vibrational powers that could in theory shake the Earth apart. And he's the only person we know of who can find and track interdimensional breaches." He is also undetectable by security cameras.

But the TV show is showing that he has the ability to see the past by touching things. He touched the sand and had a vision of the Sand Demon. This power wasn't in the wiki page.

Cisco touched the sand twice and saw the past of two different times. One before collection of that sand/extraction of that sand from Sand Demon. And another is more recent when sand was already in lab.

(A small bonus question: Do you know from the comics if he is good or evil? It'll be disappointing to see him as a bad guy.)

Cisco Ramon is portrayed completely different from his original comic counterpart. His New 52 counterpart had the added ability to "detect interdimensional breeches", like Boom Tubes, or very much like the 52 breeches seen in Season 2, but Cisco in the show does not yet have that specific variation.

Cisco in the shows powers are just being explained, and you know as much as anyone if you keep up with new episodes. At this time, his powers are limited to a slight temporal clairvoyance. He can tell when something is wrong or doesn't belong in this timeline/dimension, but as he says, "it's a vibe", a fleeting sensation. He does not have control yet.

Nothing earthquake or sound vibration yet. They did lampshade that power when Cisco looked at The Pipers gloves earlier on.

Keep in mind, the show cuts threads for time. Like Firestar, he has the power to manipulate objects at an atomic level. It was filmed, but then cut, from "Rogue Air". It may make it to the spin off. So Cisco other powers may never make it on the show.

As of the Earth-2 episodes, we know that Earth-2 Cisco, the villainous Reverb, has much greater control on his powers, including vibrational attacks. Reverb and everyone else mock Cisco/Vibe for not being aware of what he can do.

Update: As of Season 2's ending and Season 3 (and Legends), Cisco's Vibe powers have been expanded. He can create portals at will, helped Barry breach out of the Speed Force, and use sonic blasts, just like his Earth-2 Counterpart and main comic depiction.

4
Was The Reverse Flash gay?
8
How can Wells know what happened in the alternate time?
3
How does the Flash have powers on Arrow S04E19?
7
Why Does the Reverse Flash Vibrate?
9
What were all the fighters in previous Age of Heroes?
5
Explanation of Melting Point's power?
3
Is Flashpoint the reason for Caitlin Snow's powers in the TV series Flash?
7
How is Cisco able to Vibe about an event which didn't happen in this timeline in Cause and XS?