At one point the main character sees a monster in the street (I'd say at night, in an alley). It's quite a big monster and the monster can talk. They talk and the guy is frightened and the monster agrees to spare his life under one condition: that the man never ever talks to anyone about the monster. So the man agrees.

Then life goes on. He meets a girl and they have kids (if I recall correctly, not 100% sure about the kids).

But then the guy is not doing well: he thinks about that monster he saw years ago all too often. Eventually after years of silence (I think years went by because I think they did have kids), he breaks the deal and talks about the monster to his friend / wife. And the wife starts screaming / yelling at him and... she turns back into the monster.

Not too sure about what happen next.

This is Tales From the Darkside, the movie. The monster is Tommy Chong's daughter (IRL), I believe.

It sounds like the third segment of Tales from the Darkside: The Movie -

A despondent artist named Preston (played by James Remar) witnesses a gruesome murder by a gargoyle-like monster. The monster gets Preston to swear to never speak of what he saw in exchange for a promise to spare his life. After making the promise, Preston meets a beautiful woman named Carola (played by Rae Dawn Chong). Preston marries Carola, they have two kids, and Preston has a revival of his art career. But Preston was still tormented by guilt about his silence, and started reconsidering the promise he made to the monster.

Preston then tells Carola about that night ten years ago when they met after he had witnessed the killing of a man by a monster which he sculpted to show her. After releasing a heartbroken screech, Carola reveals herself to be the very same creature he made the promise with, lamenting that the promise Preston made to the monster had been broken. As such, she reverts to her previous form, and their children transform into similar monsters as well. Within the shock and despair of such revelations, Preston is killed at 'her' hands, and she escapes through a skylight with their children. The final scene shows that the gargoyle and children have turned to stone upon a building ledge, staring down at Preston's body in remorse. (Wikipedia) 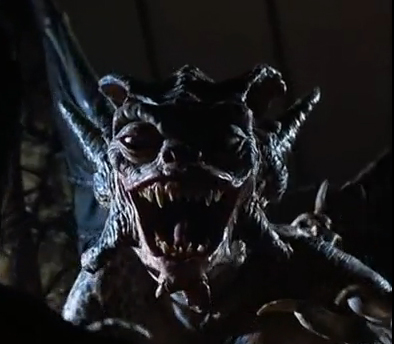