What's the meaning of this conversation between Jack and Barbossa?

In Pirates of the Caribbean: At World's End there's the following dialogue between Jack and Barbossa: 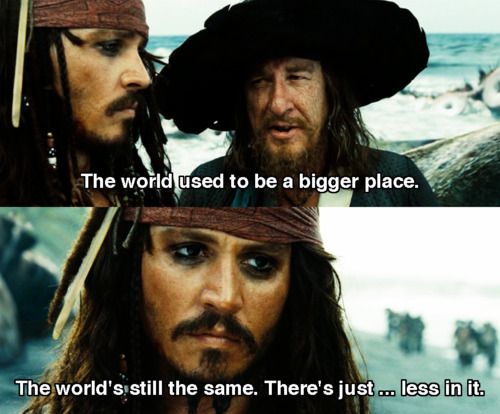 Barbossa: The world used to be a bigger place.

Jack Sparrow: The world's still the same. There's just... less in it.

What do they mean with this conversation?

They are standing next to Kraken's carcass and facing the growing threat from East India Trading Company. There is also the first part of that conversation:

Barbossa: Still thinking of running, Jack? Think you can outrun the World?
You know, the problem with being the last of anything...
...by and by, there be none left at all.

Jack: Summoning the Brethren Court, then, is it?
Barbossa: It's our only hope, lad.
Jack: That's a sad commentary in and of itself.

So, Barbossa's remar (that follows the cited part) can be interpreted as "there will be no place left for you to run to".

Jack's response could mean both a disagreement ("the World is the same") or an agreement ("less stuff [to use to hide] in it"). I think that it's deliberately vague, because Barbossa has a facial expression that - to me - shows he's uncertain of the meaning (and he needs Jack to agree).

Usually when talking about the world becoming smaller it has to do with advances in travel (and technology / communication).

Jack takes this a bit literally, the world isn't getting smaller. But he says 'less' in much the same way. The East India Trading Company threatens to take over all the seas - leaving 'less' for anyone else - including Jack and Barbossa.

5
Did Will forget who killed his father?
11
Is the Keeper of the Code (Jack Sparrow's father) immortal?
6
Does Captain Jack Sparrow die and get reborn after he enters the Kraken?
5
How does Barbossa come to know that Calypso is bound in Tia Dalma's mortal flesh?
4
Why did Davy Jones stab Will Turner thereby risking his life?
6
Why does Tia Dalma refuse to resurrect Governor Swann?
4
Why did Jack Sparrow let Will Turner escape?
27
Who are the nine Pirate Lords?
5
Can Barbossa be resurrected/saved?