Why does Neo look so unnaturally slim in Matrix Reloaded and Matrix Revolutions?

When you take a close look at the original Matrix, Neo looks normal wearing his famous black coat. However, starting with Matrix Reloaded where I am assuming producers start using a lot of CGI effects, Neo looks way too slim and almost disproportional. Is there a reason for this or is it me simply seeing him this way?

I do not believe his body appears any different. Any differences are likely due to the clothing he wore. Specifically, in the first movie he tended to wear loose clothing with jackets or trench coats. In the second two movies he wore his new one-piece dress that was much tighter fitting and was buttoned up the front, not hanging open.

Here is a picture of him in the Oracle's apartment in the first movie. He is wearing a black sports jacket hanging open loosely. This makes it more difficult to ascertain his body size accurately. 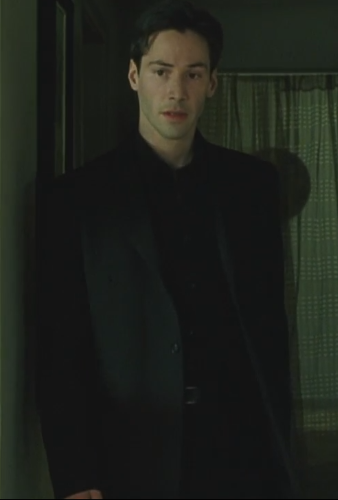 This is from the lobby scene. He is wearing a trench coat full of weapons, but we get a good side look at his abdomen. He appears to be fairly athletic, maybe a tiny pudge sticking out. However, that trench coat gives most of his appearance of being less thin.

Here is a fairly typical front-on shot of him from the second movie. This is after he beats up the agents early on and goes on one of his flying adventures. His clothing is tighter, and closed up in front. The only things flapping around are the tails of his dress or coat or whatever he is wearing. His torso appears to be about the same size as the scenes from the first movie, maybe a tiny bit slimmer. 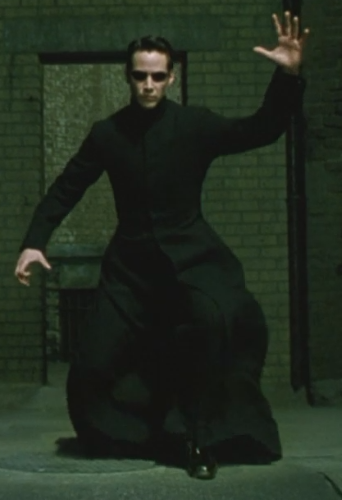 Finally, here is a shot from the monastery in the mountains after he unlocks god mode to stop the bullets and before the Merovingian's goons unleash their Kung Fu attack. This gives more of a side view compared to the previous picture. He is clearly thin and the clothing is somewhat snug but he does not appear to be "unnaturally" thin. 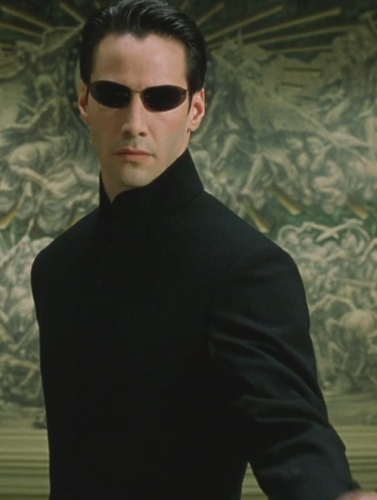 After comparing these screen shots and watching a few scenes briefly, I do not believe that Neo is any thinner. Perhaps Keanu Reeves lost a little weight between filming the first and second two movies (remember 2 and 3 were filmed at the same time). However, I would attribute the difference in appearance strictly to wardrobe.

I would certainly not categorize his appearance in the second and third movies as being "unnaturally" thin.

Not the answer you're looking for? Browse other questions tagged the-matrix-revolutions the-matrix-reloaded .