Who made this Ant-Man promotional material?

I recently found this promotional video for Ant-Man, posted by what I believe to be the offical YouTube channel for Disney Japan, a hilarious but very odd song and dance. Being as it is Japanese, I initially passed it off as "just one of those Japanese things" and let it be.

However, since then I have found other videos with these same two people, dancing to the same song with different lyrics. For one example, please see this video, or this video where you can see a talk show of some kind talking about them.

Unfortunately, I have no idea who these people are, and being unable to speak Japansese I am completely incapable of doing any research into it.

Who are these two people, how is this promotional material for Ant-Man, and what on Earth is going on?

The group is "Harsh scan explosion (EGU-SPLOSION)", a Japanese dance troupe/group. Not normally a comedy group. The song/video/meme of Honnoji Incident (probably badly machine translation of 本能寺の変) was first posted in 2015. Like any other funny video, it's been meme'd to death, as seen in this Vine tag search.

The specific linked video was indeed posted by the official Walt Disney Studios of Japan youtube account (WaltDisneyStudiosJP), and featured on the official Disney/Marvel of Japan website. 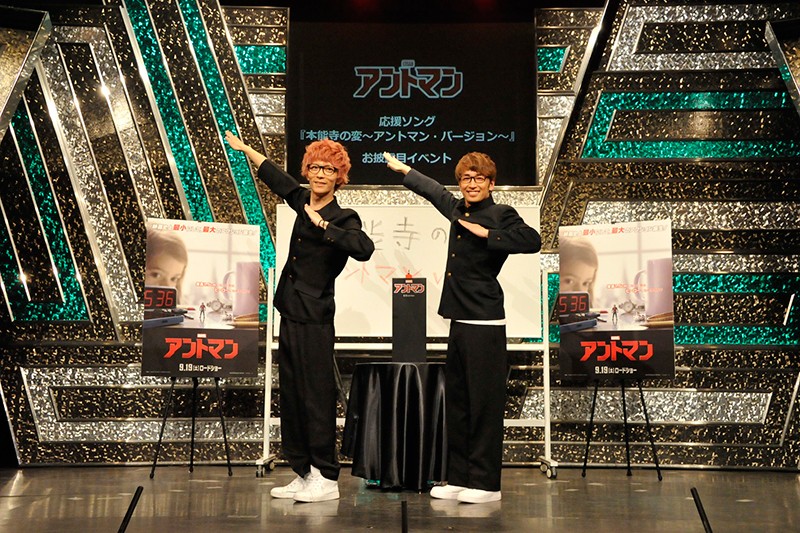 This time, to give the overwhelming support from dancers such as 20's "Honnoji Incident", dance unit that has been revered as "God", Egu-Splosion is, was appointed to the strongest cheer dancer of the movie "Antoman" , it was held an event to show off the cheer song.

Harsh scan explosion that tag with Aikawa Nanase such famous artists and popular comedian is a topic every time. Tag of the first time and made the movie this time to realize! It's named after the new hero "Antoman" of the Marvel movie "Honnoji Incident / Antoman version" was showcased in the dance of Kirekire. (Google Translate)

Like a celebrity sponsor for the movie, Disney/Marvel of Japan has simply latched onto a popular meme to promote the Antman movie. Very Genre-Savy of them.

35
Ant-Man, shrinking, and weight
13
How did Ant-Man manage to get big again?
0
How do we hear ant sounds in Ant-Man?
5
Why does the vision change when Ant-Man shrinks?
2
How does Darren Cross know Scott is in the suit in Ant-Man?
8
How was Ant-man able to breathe when he goes sub-atomic?
5
How could Ant-Man become so small?