Why does the T-800 Terminator model talk with an accent? 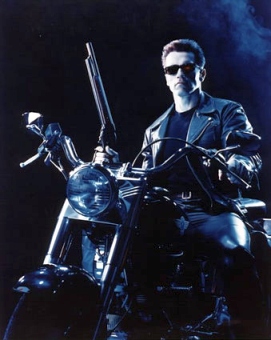 The out-of-universe explanation is obvious: English is not Arnold Schwarzenegger's first language.

But given James Cameron's reputation as a perfectionist I wonder if he ever gave an in-universe explanation for why an artificially intelligent machine would talk with an accent.

Is there an in-universe explanation for why the T-800 model talks with an accent?

It is explained in a deleted scene, although not all might agree on considering it canon, from Terminator 3 Trivia:

The "Sgt. Candy" scene, which was included in early prints of the film, explains why all the Terminators look like Arnold Schwarzenegger. Arnold's character (Sgt. Candy) has a Southern US accent. When one of the scientists questions it, another scientist replies (in an Arnold voice over), "We can fix it." The actor portraying this scientist is Jack Noseworthy. This scene is available as a special feature on the DVD version. 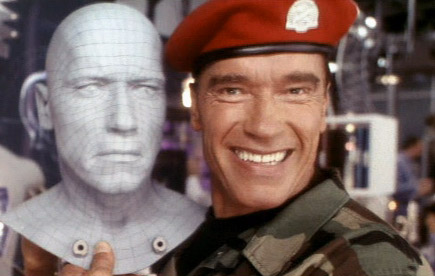 In the Making of the Video Game from the Terminator 3: Rise of the Machines DVD, it is implied that this scene was filmed to be used as a cut scene, and not actually intended to be used in the theatrical release.

This would explain why:

This contradicts information from the first film, where Kyle Reese refers to the [Arnold model] as "new", replacing the older rubber-skinned 600 series, also seen in Terminator Salvation.

In the novel T2: Infiltrator a different origin for the physical and vocal templates was provided:

Dieter von Rossbach was a former counter-terrorist, who meets and joins forces with the Connors in the present.

The reason stated for copying Dieter was that Skynet was looking in the old military files for someone whose body could effectively conceal the Terminator's massive endoskeleton.

If we take just The Terminator as valid for this, due to changes in timeline, then the answer has to be related to Cameron's offhanded remark:

Further more from that article:

The Terminator in the first film spoke only 17 lines (he has several times more dialogue in the sequel). But those were the lines, delivered in a singularly Schwarzeneggerian deadpan, that made Arnold a movie icon.

Most of what he said is very simple, short sentences, in a monotonous voice. The two most complicated ones are in the gun shop The .45 long-slide with laser sighting. and Phased plasma rifle in 40-watt range.

"The 600 series had rubber skin. We spotted them easy, but these are new. They look human - sweat, bad breath, everything. Very hard to spot. I had to wait till he moved on you before I could zero him."

The T-800 we see is a newer model in a line of Infiltrator units, a progression in robotic evolution. Each new series improved on the last. It's limited speech and monotonous voice likely required it not to speak in order to pass as a human, only speaking when it needed to. A big improvement from rubber skin, no sweat, non-human smell.

It has an accent because Skynet is still experimenting on how to design Infiltrators for maximum infiltration capability.

Now taking the other movies into account, we see by the time Skynet, now delayed a decade in creation, but starting with future-tech, has a jump start on technology, created the T-1000 series which has corrected the voice problem, having a more advanced processor and everything.

Not the answer you're looking for? Browse other questions tagged character terminator-series the-terminator .