"Smile because it confuses people..." - when is this said by the Joker?

There is a line that is all over internet attributed as being said by the Joker: 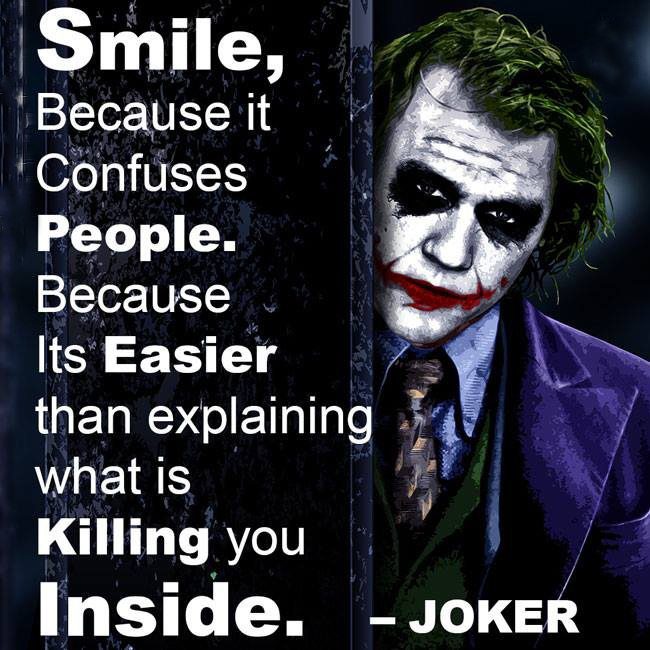 But I can't remember from Batman: The Dark Knight when Joker character might have said this... All posters from internet contain Heath Ledger's Joker with the quote.

Is it said by him at all? If so then in which scene? Or is it from a past Batman movie? Or from the comics? Can anybody recall anything?

I really doubt that The Joker has ever said this.

You are right when you say that the quote is all over the Internet, and quite often attributed to Heath Ledger's version of The Joker. But Heath Ledger only played The Joker once, in The Dark Knight, and he definitely didn't say it in that film.

What's more, not a single instance of those quote that I can find (and there are a lot of instances) actually offers a source for the quote other than "The Joker".

Add in the fact that this doesn't even sound like something The Joker would say, and is instead something an angst-ridden Tumblr teenager might think is deep, and I think it is safe to say that this is a classic example of someone making up a quote and attaching it to someone iconic in order to give it more credibility.

In short - I doubt the character of The Joker has ever said this.

82
What is the real reason for the Joker's scars?
12
What does Dutch mean in Predator when he said that fighting armed people made Predator a “poor sport?”
40
Why did the Joker lick his lips?
4
Why did the Joker choose Harvey Dent?
10
What is the "prayer" being said when Elsa was being crowned?
9
How does Batman complete the Joker?
7
Why would Dent believe the Joker?
2
How did the Joker plant bombs in the hospital?
6
Do the previous Batman movies adhere to Batman's rules?