I am looking for a movie I saw as a child in the 1980s on German TV. Sadly my memory is somewhat blurrish.

I remember a "20000 leagues under the sea"-inspired story, featuring the main characters being abducted into a submarine or underwater city.

It was a live-action color movie with a distinct steam fantasy feel. Most likely not a German but a dubbed foreign movie, and I remember a rather high production value. Likely made in the 1970s or 1980s.

I most dominantly remember that it featured antagonists with large, bizarre moustaches. The most memorable image is that in the end, a lot of people die in an over-the-top (still suitable for minors) fashion, with one being pierced by a cello or double bass.

The whole movie had a humorous but also rather grotesque, silent-film-era feeling to it.

I'm afraid that's all I have to go on. Any hints appreciated.

Update: Given the considerable difficulty in finding this movie, it is quite possible that it was a former Eastern Bloc production. The closest I could find in tone and style is Vynález zkázy (The Fabulous World of Jules Verne) from 1958 (IMDB, Trailer), but that is not it.

Update: It is none of the works listed at Wikipedias' Adaptations of Twenty Thousand Leagues Under the Sea.

This is "Tajemství Hradu" (otherwise known as "The Mysterious Castle in the Carpathians").

It's Jules Verne inspired, the characters have amazing moustaches and there's a scene involving a cello spike being used to murder one of the characters... 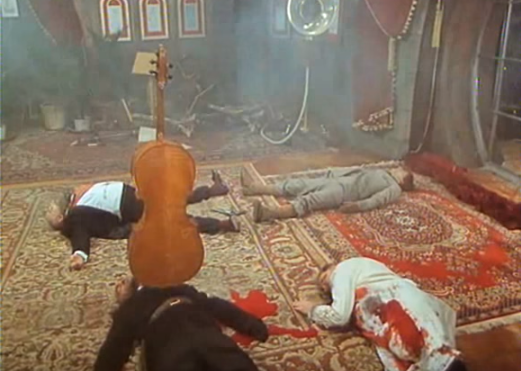