How did Indiana Jones manage to follow Marion to the Island?

From Wikipedia's plot summary of Raiders of the Lost Ark:
(all images are taken from here)

Indiana Jones and Marion leave Cairo to escort the Ark to England on board a tramp steamer. The next morning, their boat is boarded by Belloq and the Nazis, who once again steal the Ark and kidnap Marion.

Indiana stows away on their U-boat and follows them to an isolated island in the Aegean Sea where Belloq plans to test the power of the Ark before presenting it to Hitler.

How exactly did Indy "stow away" on the submarine?

The script reveals that Indy attaches himself to the periscope:

Indy climbs the ladder to the top of the turret and braces him- self between the two uprights there--the 7 foot radio mast and the 20 foot periscope.

Still the ocean comes up to meet him. Soon the top of the turret is under water and the radio mast is disappearing.

Indy shifts his grip to the periscope, working his way up it and hanging on for dear life as the ocean whips at his body. The periscope is quickly going under. Indy hangs on to the top three feet, all that remains above.

The forward movement of the sub continues, but, to Indy's slowly dawning delight, the dive stops. No more of the periscope goes under. Indy smiles; it's a pretty good smile, too, given the circumstances. Indy pulls out his bullwhip and begins tying himself to the periscope.

And it seems that at least some of this was filmed:

This is the most well-known of the Indy cut scenes, by virtue of being the one most crucial to the plot. This scene explains how Indy survived his trip at sea attached to a submerged submarine. As the sub descends, he climbs up and grabs hold of its extended periscope. He then lashes himself to it with his whip for the long trip. 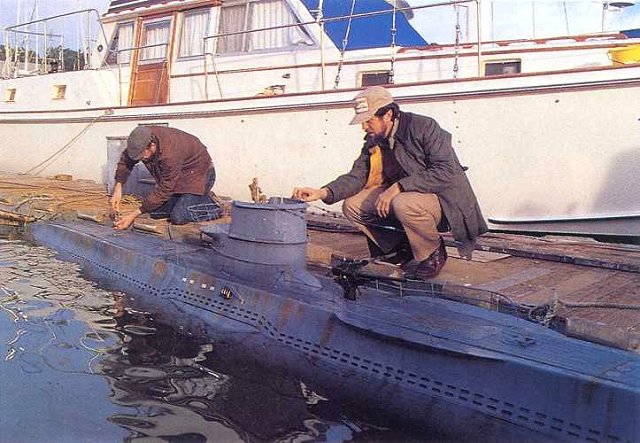 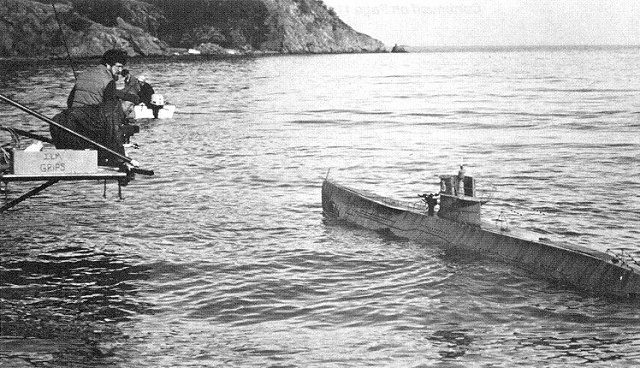 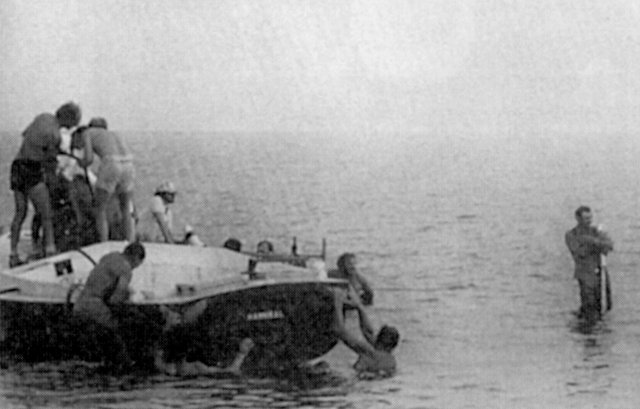 This cut scene did make it into the Marvel Comics adaption: 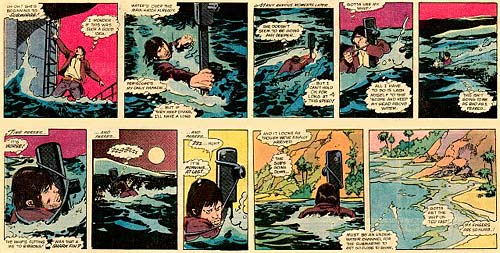 Does the film actually show the submarine submerged for its journey?

Raiders of the Lost Ark is set in 1936, the pre-World-War-II era. Unlike nuclear submarines today, U-boats of that time weren't capable of long journeys while submerged.

U-boats traveled on the surface, propelled by diesel engines. They would dive to periscope depth to follow ships and attack. They would dive deeper only in order to avoid detection or attack by enemy ships. Speed was severely limited while submerged.

Because diesel engines need oxygen for combustion, underwater operation required electric engines powered by batteries. These batteries had to be recharged periodically by running the diesel engines—which, therefore, the U-boat could only do while surfaced. It simply wasn't practical or even possible for a U-boat to be submerged all the time;

Here are a couple of sources on this:

Unlike nuclear submarines, which could dive to depths of over 1,000 feet, travel thousands of miles submerged and remain on patrol for months at a time, the u-boat can operate submerged only for brief periods at a time. (UBoatAces.com)

Because speed and range were severely limited underwater while running on battery power, U-boats were required to spend most of their time surfaced running on diesel engines, diving only when attacked or for rare daytime torpedo strikes. (Wikipedia)

There was no reason for the submarine to submerge at all, even to periscope depth. Indy simply rode on the conning tower until the submarine got near the cave, and then jumped or climbed off.

(By the way, for a real-life example of a submarine from the same time period, visit the Museum of Science & Industry in Chicago, IL. There you can tour the U-505, a German submarine captured by American forces during World War II. The U-505 and its fellow Type IX U-boats were manufactured in 1935 and 1936.)