What is the device taken from Alex Trusks at the end of Hypercube?

The Cube series is a really complicated movie series.

At the end of the Hypercube, Kate gives a device to some serious guys (military guys maybe). This device was taken from Alex Trusks' neck.

What is the purpose of this device? 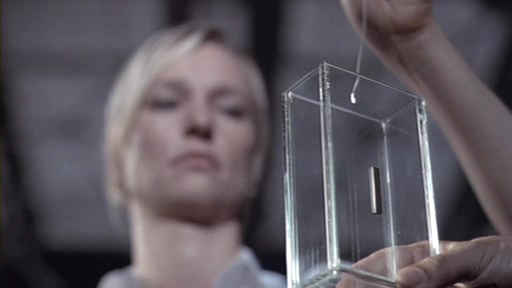 The only information in the original version of the film is the last line spoken by an unknown African American in a suit, who presumably works for Izon or the military:

The fact he said "recorded on it" implies it's some kind of sensor device, such as a camera, microphone or other more high-tech information gathering system rather than a storage device, as usually you'd say "saved on it" or "stored on it" in that case.

There's more information given in the alternate ending which I can't seem to find, though Wikipedia says:

The longer alternate ending included in the special features on the DVD reveals the "owners" to be the government; in the shorter version it is unclear who they are, but it is assumed they are Izon. Kate is executed in both versions, but she is praised for being the first operative to make it out alive. In the alternate ending it is revealed to Kate that she was in the Hypercube for just six minutes and fifty-nine seconds. It was an experiment used for quantum teleportation.

The fact that this was an experiment would seem to back up the idea that it was a sensor as the scientists working on the project would need a way to get data back from the experiment and there was no other machinery shown in the "real world" which could be monitoring what happened inside: 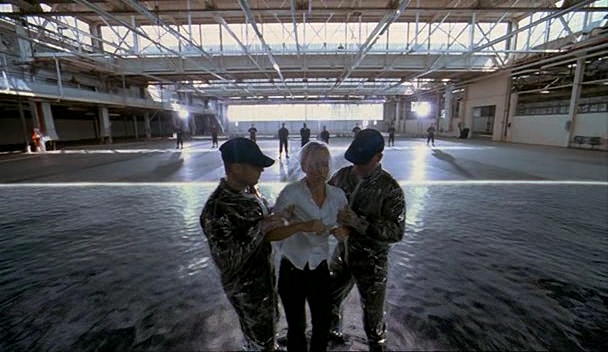 It was some sort of storage device with confidential information on it. I don't remember many other details though as to why she was looking for it or who had it initially.

It may be much more than a simple recording device. As shown, time moves differently inside, yet all of Jerry's watches are perfectly synchronized. We know they were taken from different versions of Jerry at different times, so if they were functioning as normal watches, you'd have wildly different times on each watch, as well as much more time having passed.

The fact that they all line up to the "6:06:59" reading with Kate suggests that Alex Trusk's necklace was some kind of stabilizing device. The watches (and time) stabilized and ran normally when in proximity to the device. This is also supported by the fact that at the end, when the room is disintegrating, the only one that remains is Kate, who took the device from Alex's neck after her death.

This would explain why Simon ran into multiple versions of Jerry and the others and experienced more time, but Kate did not.

Of course, that doesn't explain how what seems like hours passed for Kate after she met up with Alex (and was in proximity to the device), yet the watches still only show 6 minutes and 59 seconds have actually passed.

I suppose it's possible that the device had SOME stabilizing effect, but not completely. And as the cube imploded, normal time from the outside universe began leaking in.

Or, it could just be that Jerry's watch only counts time for the outside universe. Modern watches count time using the oscillation frequency of quartz when exposed to an electric charge, so if somehow that were unaffected by the weird time frame of the cube, it would explain it. In effect, the watches would only tick when exposed to time from the outside universe. If normal time seeped through to the cube at predictable intervals (and they were increasing), you could probably use that to calculate when the cube would implode. Hence, the scientist making that "6:06:59" calculation.

In fact, it could be both of those explanations together. If so, and Alex Trusk were hiding in the tesseract, it would make sense that they would send in an operative to retrieve it. She developed a way to stabilize (and ultimately control) the tesseract, and based on her hiding, I doubt she sent the government instructions. They'd need to retrieve it to figure out how it worked.

Or it could be just weird, timey-wimey stuff. In the end, WHO KNOWS. :-P

Not the answer you're looking for? Browse other questions tagged plot-explanation analysis cube-2-hypercube .

13
What happens to Alex at the end of Shallow Grave?
10
What happened to Kate Lloyd?
14
What is the significance of the Origami Bum?
2
What is the nature of the blackmail that will ultimately result from Gene Hunt's destruction of the video tape?
7
Was Birdemic intended to be a bad movie?
13
What is the ultimate goal of the murky goings on in Sicario?
13
Who really designed The Lake House and under what considerations?
9
What happened to Alex?