Are there different endings to Cloverfield? 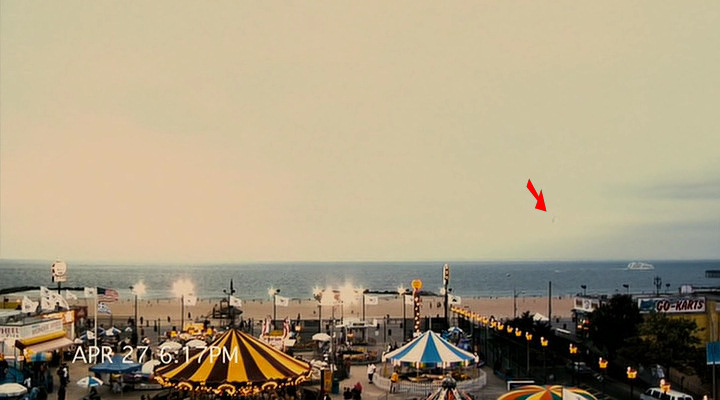 In particular, I'm talking about the scene at the very end, where the camera is on the happy couple in the ferris wheel. The first time I watched it, my friend pointed out the faint streak that hits the water as the camera pans across the ocean.

The second time I watched it on a different disc, and I was going to show the other people that streak...but no matter how I looked and slowed down the viewing, I couldn't find it. Is there a known version difference, or...?

From Wikipedia (source is Paramount pictures themselves):

The DVD includes two alternative endings, which vary only slightly. The first alternative ending shows Rob and Beth exiting the Coney Island–Stillwell Avenue station instead of on the Ferris wheel and features different sirens in the background as Rob talks to the camera.

In the second alternative ending, just after the final explosion, Beth can be heard screaming "Rob!", followed by a very brief clip of an unknown person looking at the camera (in the commentary, Matt Reeves said that it was one of the crew members) and brushing rubble off the lens. The film then ends with the original final clip of Rob and Beth on their Coney Island date recording themselves on the ferris wheel as the camera tape runs out, with two differences: there is no timestamp in the lower left-hand corner of the screen, and there is an additional beeping tone indicating the end of the tape.

Essentially, yes, 2 alternate endings exist, but they do not make many changes to the overall plot, just to the perception of this supposed sequel they're making.

I just popped in the DVD. I can verify that on the Canadian DVD release there are two alternative endings, with or without commentary.

I watched them when I got the movie a few years ago, but I cannot recall them. But, they are there!

Not the answer you're looking for? Browse other questions tagged ending cloverfield .