How does Quorra “escape”?

At the end of TRON: Legacy Sam Flynn and Quorra escape into the real world, but I'm wondering how the rematerialization process works on Quorra? 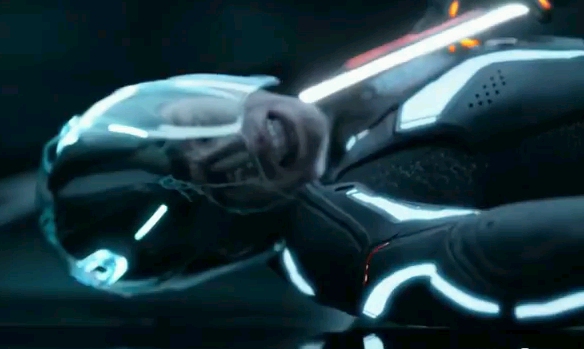 Sam bleeds, which prompts Rinzler to identify him as a "User". The blood seems to suggest that Sam is still human in the Grid (programs don't bleed, they de-rez)?

In return, would that mean that Quorra remains "digital" in the real world?

How is it possible for Quorra to enter the real world? Is she still an ISO or flesh and blood?

analysis tron-legacy
Share
Improve this question
edited May 18 '15 at 13:55

How is it possible for Quorra to enter the real world?

It is stated specifically that Flynn's exit was placed far away from the population to avoid stray programs from wandering in. This implies that any program could have exited if they had access to Flynn's disc.

It is also stated the CLU has found a way to not only bring himself, but all of his minions into the real world. He places Flynn's disc in a holder high in his ship, presumably so the exit effect would take everyone on the ship with him.

If there was no danger of letting programs (or ISOs) re-materialize into the real world, Flynn wouldn't have had to make the necessary precautions of placing the exit far away, and requiring his data disc.

Is she still an ISO or flesh and blood?

Flynn spoke about Quorra as a solution to all of the real world's problems.

Kevin Flynn: Yeah. The last ISO.
Sam Flynn: All this time, you were just protecting her.
Kevin Flynn: She's the miracle, man. Everything I ever worked for. "A digital frontier to reshape the human condition."
Sam Flynn: I always thought that was a plug line.
Kevin Flynn: In our world, she can change everything.

This leads me to the conclusion that she didn't rematerialize as a human. Or maybe she is the perfect human, with no flaws (ie such as maybe no genetic flaws, or perfect disease immunity or something). I don't think she is an android, if a program came through it would just try to complete its programming. Perhaps she is a new lifeform that takes on the shape of a human.

While watching movie I thought she is like an Android in the real world but I was wrong.

As said in tron.wikia of Quorra

Quorra ultimately had her wish granted when she accompanied Sam on his journey back to the real world, apparently becoming a flesh-and-blood human in the process, and happily set off with Sam as he showed her the wonders of the physical world.

She is flesh-and-blood human in real world.

In movies they never cleared this point, so it's just movie magic.

I think that the problem is that there's an inconsistency due to a (small) failure on the part of the script writer(s).

So the in universe answer is that it shouldn't be possible given what we have seen. Maybe further exploration of the theme will yield an answer.

Note that I've asked similar questions here and here over on scifi.stackexchange.com

The ISO's have their own complete DNA code, as you can see when Flynn is fixing Her. Even just being able to digitalise the Human Genome would be a huge scientific achievement. Because the ISO's have their own DNA strand, they will be reformed into the new world following that digital strand of DNA, most likely turning an ISO into a flesh and blood perfect being, neither Human nor programm, but a whole new perfect lifeform.

In the original TRON movie, ENCOM was working in a system to deconstruct/reconstruct matter, storing it digitally in the interim.

In that movie they were testing the process with an orange.

What this probably means is that the "digitizing laser" is both a combination molecular scanner / disintegrator that destructively scans an object, and also a 3d printer able to reconstruct said scanned object by assembling "new" matter.

When the MCP uses the system to silence Flynn, it is discovered that the digitization process actually modifies the data to integrate in the target environment. Since Flynn shouldn't have been able to interact with the digital world had he just been a clump of data representing a human, it probably means he was modified to be another functional "program" in the grid, albeit with special properties.

It stands to reason that the system is capable of performing the same function in reverse, adapting the digital data to be 3d printed into a form capable of functioning properly in the physical world. We could even argue that, after going through the process, both Kevin and Sam Flynn are no longer standard humans, as they've been "rewritten" when entering both worlds.

As for Sam's and Quorra's clothing when exiting the grid? Maybe Flynn programmed the system to generate casual clothes for the exiting user, just so he wouldn't generate suspicion if leaving his Arcade wearing weird clothes or nothing at all.

Let's answer this by asking a simple question - how is it possible for a human being to be 'digitized'? Once you accept the ideas that A) A human (I.E. organic, living being) can be digitized and then reformed as they were and B) That computer programs can have a distinct personality (such as Tron from the original film), then the idea that Quorra could become human is not far-fetched at all. The program that turned a digitized Sam and returned him back to his same body did the same thing with Quorra - effectively creating a human body where there was none.

Trying to keep in with the universe. When Flynn was repairing Quorra via her disk, did no one notice the digital DNA strand? That, more than likely is the whole key. Conceived in a digital world with a perceived organic structure.

At least, that's my take on it.

There's another possibility, which could sound stupid to many people, but in theory it could work if you subscribe to the simulation hypothesis, which proposes that the "real" universe as we know it is a simulation, therefore Quorra moving from the Grid to Sam's world would work because she's not actually becoming flesh and blood, she's just moving upward one simulation.

This is the sort of thing Cracked: After Hours addresses :')

Not the answer you're looking for? Browse other questions tagged analysis tron-legacy .

21
Why Doesn't CLU Visit Flynn Earlier?
10
Where did Tron Legacy take place?
24
What does 'How you doing?' by Joey mean?
10
Was The Great Escape meant to be funny?
14
How does the “skip code” work in The Empty Hearse?
6
Why didn't McMurphy escape?
5
How does Te3n justify its title?
4
Why don't they just escape from Negan?